This blog continues to follow the books of Genesis and the Gospel of Mark in tandem. The series which began on 01/0102015 can be accessed from my archives. The headlines are reminders of the world we live in.

Spending the night there that night

Yaakov took a gift from what was at hand, for Esav his brother;

nursing camels and their young, thirty,

he handed them over to his servants, herd by herd separately,

and said t his servants:

Cross on ahead of me and lave room between herd and herd.

He charged the first group saying:

When Esav my brother meets you

and asks you saying,To whom do you belong, where are you going and to whom do these ahead of you belong?

– to your servant, to Yaakov, it is a gift sent to my lord, to Esav, and see,

he himself is also behind us.

This he charged the second and the third and thus all that were walking behind the herds, saying:
According to this word shall you speak to Esav when you come upon him; you shall say:

Also – here is your servant Yaakov behind us.

For he said to himself:

I shall wipe the anger from his face

with the gift that goes ahead of my face.

Afterward when I see his face

perhaps he will lift up my face!

The gift crossed ahead of his face,

but he spent the night that night in the camp.

He arose during te night

took his two wives, his two maids and his eleven children

to cross the Jabbock crossing.

He too them and brought them across the river, be brought across what belonged to him.

And Yaakov was left alone.

And a man wrestled with him until the coming up of dawn.

When he saw that he could not prevail against him

he touched the socket of his thigh;

the socket of Yaakov’s thigh was dislocated as he wrestled with him.

Let me go for dawn has come up!

I will not let you go

unless you bless me.

What is your name?

Not as Yaakov / Cheat shall your name henceforth be uttered

but rather as Yisrael / God Fighter,

for you have fought with God and men

Then Yaakov asked and said:

Pray tell me your name!

Now why do you ask after my name?

And he gave him farewell-blessing there.

for: I have seen God face to face,

and my life has been saved.

The sun rose on him as he crossed Peniel

limping on his thigh. 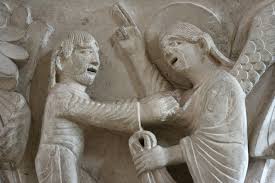 The storyteller has shown how Yaakov has suffered for his treachery to his father and brother under his uncle Lavan; and how he has learned to value blessings, like his wife Rahel, as not measurable on the same scale as material blessings. He has not abandoned his cunning but used it to withstand the cunning of Lavan. As Jacob’s character develops he does not forget his ancestral God, YHWH, whom he trusts as the source of blessings. The storyteller does not make him into a conventional male hero – he remains timid – yet in his timidity he shows great courage in following out his conviction that YHWH’s blessing can only be fully given in the land of promise, and in peace with his wronged brother.

The storyteller plays with the word “face” meaning the public presence of a person. Yaakov’s gifts to Esav go ahead of his “face” so that perhaps the anger can be wiped from Esav’s “face”; so that when Yaakov’s actually sees Esav’s face, Esav may do him honour (lift his face) rather than degrading him (making his face fall). Probably the storyteller had not read Jean-Paul Sartre’s subtle reflections on the way human beings are under each other’s “regard”, but his recognition of how a person’s whole being may grow or diminish according the estimation of others is very shrewd. More than shrewd indeed, for he takes it a stage further than his audience might expect, opening up a more profound meaning of “face”.

Yaakov, having done all that he can think of to wipe the anger from his brother’s face, even to the extent of putting his family ahead of him in the firing line, is left alone: that is, where he sees no face and no-one can see his. In that moment he is gripped by something deeper than all human honour, the thing he has wrestled with throughout his journeying, the source of life and blessing, which desires his complete trust but not his servitude. This thing which could kill him, arouses his courage and makes him fight for his life, until finally Yaakov is strong enough not to let it go. Then he can be recognised as a true partner of God, no longer a mere trickster, but one capable of standing up to human beings and to God. Even in this moment, Yaakov keeps his cunning, hoping to gain power over his assailant by learning his intimate name, which is refused, almost with a smile of respect. His new name, which of course the storyteller’s audience knows as its own name, Yisrael, may have had other meanings – etymologically it seems more likely to mean “God fights” – but the explanation given here honours the equal partnership between God and his chosen family: only when they stand on their feet, can God speak to them.(See Ezekiel 2:1: “When I saw this I prostrated myself and I heard a voice,”Stand on your feet, son of man, and I will speak with you!”)

As the passage reveals, this ability to stand up to God is also the desire to gain God’s blessing, goodness and fullness of life. Through always wanting the best for himself, Yaakov has arrived at what truly is best and is beyond his dreams. He calls it the “face” of God, which is not for public presentation like human faces, but is only revealed when human beings struggle to be true not just to themselves but to what is beyond them, as it was revealed to Avraham in the binding of Yitzhak, and to Jesus in the garden of Gethsemane. The story ends with a sign, almost,  of resurrection, “the sun rose on him as he crossed Peniel, limping on his thigh.”

The value of this theology is insufficiently recognised in the Christian tradition, which has always denigrated the desire for material gain and the love of self, rejecting them for spiritual gains such as the love of others and of God. But here is a theology which recognises that putting a value on material goods can be the beginning of valuing all good gifts, and that a healthy love of self is the necessary basis for love of neighbour and of God. In both instances of course, a process of learning is required, which leads  a person to see, as Yaakov did, that people are more valuable than things; and that one’s love of self, one’s face, can only be fulfilled when one faces one’s responsibility to God and neighbour. In this theology, the “blessed vision”, the sight of God’s face, is not achieved through withdrawal from the world and self-abnegation, but through immersion in the world and honest self-expression. God’s blessing comes to us first of all in the gift of our own lives and the created world in which we live. Through our love of the world and ourselves God leads us (through Jesus Christ) to the stranger blessings reserved for those who, by wrestling with God, become able to love God as the source of all goodness and their neighbours as themselves.

This has taken my blogging time for today. I’ll resume Mark’s gospel tomorrow!