This blog has been following the book of Genesis and the Gospel of Mark in tandem since 01/01/2015.The whole series can be accessed from my archives. The headlines are a reminder of the world we live in.

go up to Bet-El and stay there,

land construct a slaughter site there,

to the God / El who was seen by you when you led from Esav your brother.

Yaakov said to all his household and all who were with him :

Put away the foreign Gods that are in your midst!

Purify yourselves! change your garments!

Let us arise and go up to Bet-El,

there I will construct a slaughter site

to the God who answered me on the day of my distress.

-he was with me on the way that I went!

So they gave to Yaakov all the foreign Gods that were in their hands,

along with the sacred rings that were in their ears,

and Yaakov concealed them under the oak / ela that is near Shekhem.

Then they moved on.

Now a dread from God lay upon all the towns that were around them,

so that they did not pursue Yaakov ‘s sons.

So Yaakov came back to Luz, which is in the land of Canaan –

that is now Bet-El – he and all the people that were with him.

There he built a slaughter site,

and called the place;

for there the power of God had been revealed to him, when he fled from his brother.

The author is keen to mark the true significance of sanctuaries which were still used in his own time. Bet-El is of prime importance because of its crucial place in Jacob’s story. If God’s presence is not limited to one place, as is the case with YHWH the travelling God of Avraham, then the memory of those places where his presence has been revealed are of great value to subsequent generations. Some of us have ‘places’ in our lives – they may be events, locations, or people – in which God was real to us, to which we can return in mind or body for refreshment.

Jacob however has another purpose: he must purify his people from the violence they have done to the people of Shekhem and bring them into the shelter of God ‘s blessing. God has, as I noted yesterday an ambiguous relationship with the slaughter of the Hivvites. His name is not mentioned in the narrative, but the sign of belonging to God, namely, male circumcision, has been used by Yaakov’s son’s as a device for weakening their enemies. The storyteller makes no comment on this matter.

He does tell us however that a ‘dread’ from God came over those who might have punished them for their crime. I wonder if this dread was different from the natural fear that peaceful people might have felt for such a bunch of thugs. But the storyteller wants his audience to see that God is cooperating in Yaakov’s desire that his people, in this hour of danger, should share the blessing he found in his time of need. He is realistic about the ‘children of Israel’, who are sometimes no better or maybe worse than people who worship other Gods. But the blessing of God, transmitted through the men and women of faith, is more persistent than their backsliding. This partiality of God for his chosen humans, which according to the prophets of Israel can turn into rage against them, is more subtly balanced in the book of Genesis than elsewhere in the Jewish bible, except in Ruth and Jonah. The Genesis storyteller never forgets that God’s blessing on his chosen family is ultimately intended for all the families of the earth.

I believe that this is also true of anything we may regard as blessings on our lives.

51 And a certain young man followed him with a linen cloth cast about his naked body; and the men seize him;
52 but he, leaving the linen cloth behind, fled from them naked.
53 And they led away Jesus to the high priest. And there come together to him all the chief priests and the elders and the scribes.
54 And Peter followed him at a distance, till he was within the court of the high priest’s palace; and he was sitting with the officers and warming himself in the light of the fire.
55 And the chief priests and the whole sanhedrin sought testimony against Jesus to cause him to be put to death, and did not find any.
56 For many bore false witness against him, and their testimony did not agree.
57 And certain persons rose up and bore false witness against him, saying,
58 We heard him saying, I will destroy this temple which is made with hands, and in the course of three days I will build another not made with hands.
59 And neither did their testimony agree.
60 And the high priest, rising up before them all, asked Jesus, saying, Do you answer nothing? What do these testify against you?
61 But he was silent, and answered nothing. Again the high priest asked him, and says to him, *Are you the Messiah, the Son of the Blessed?
62 And Jesus said, I am, and you shall see the Son of man sitting at the right hand of power, and coming with the clouds of heaven.
63 And the high priest, having rent his clothes, says, What need have we any more of witnesses?
64 You have heard the blasphemy; what do you,think? And they all condemned him to be guilty of death. 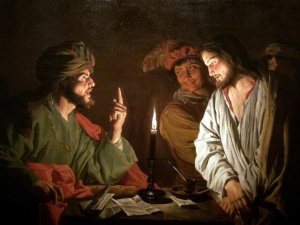 Those who have suffered in show trials at any time or place, have shared in Jesus’ suffering reported by Mark.  A question arises as to the sources of Mark’s extensive knowledge of what happened in Jesus’ trial. It may be that Mark names Simon Peter as a witness of at least some of it. More generally, details of the trial would doubtless have reached the ears of believers fairly soon after the event. It is impossible to say what degree of historical credibility the details have. Mark weaves them into a compelling narrative which became the basis of the other Gospel accounts. In particular he notes that it took place at night – making it an illegal gathering of the Sanhedrin; that Jesus was accused of offensive words about the temple; and  that ultimately he was accused of blasphemy, though it’s by no means clear that claiming to be the Messiah constituted blasphemy. Perhaps Mark means us to understand Jesus ‘ I AM’ as a blasphemous claim to be equal with God.

At any rate Jesus clearly aligns himself with the Son of Man described in Daniel chapter 7 who represents the rule of God’s Holy Ones. He/ they will sweep away the unjust rulers of the world. The reader notices that Jesus refuses to recognise the authority of this court, which is only concerned to find a way of condemning him.

We cannot judge the historicity of this account but we can, from our knowledge of such trials, judge that either Mark or his sources had a good grasp of how they are managed. My own knowledge of them makes me an enthusiastic supporter of Amnesty International. If you haven’t done so, you might like to go to their website and read about their work.

Tags: Bethel, The trial of Jesus