This blog has been following the book of Genesis and the Gospel of Mark in tandem since 01/01/2015. The whole series can be accessed from my archive. The daily headlines are reminders of the world we live in. 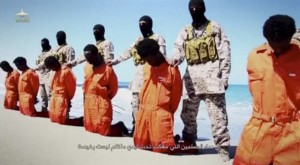 These are the begettings of Yaakov.

Yosef, seventeen years old, used to tend the sheep along with his brothers,

for he was a serving-lad with the sons of Bilha and the sons of Zilpa, his father’s wives.

And Yosef brought a report of them, an ill one, to his father.

Now Yaakov loved Yosef above all his sons,

for he was a son of old age to him,

so he made him an ornamented coat.

When his bothers saw that it was he whom their father loved above all his brothers,

and could not speak to him in peace.

Yosef dreamt a dream and told it to his brothers-

from then on they hated him still more-

he said to them:

Pray hear this dream that I have dreamt:

we were biding sheaf-bundles out in the field,

and look, my sheaf arose, it was standing upright

and look your sheaves were circling round and bowing down to my sheaf.

His brothers said to him:

Would you be king, yes, king over us?

Or would you really rule, yes rule us?

From then on they hatred him still more – for his dreams, for his words.

But he dreamt still another dream and recounted it to his brothers.

Look I have dreamt still another dream:

the sun and the moon and eleven stars were bowing down to me!

When he recounted to his father and his brothers,

his father rebuked him and said:

What kind of dream is this that you have dreamt?

Shall we come, yes come, I, your mother and your brothers

His bothers envied him

while his father kept the matter in mind. 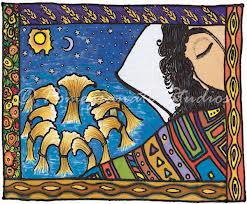 This passage begins a new section of Genesis, the story of Josef, which is partly folk-tale (a hated younger son who becomes the most successful of all the family), but also a realistic story of family hatred and reconciliation, all in partnership with a God who dreams more complex dreams than human beings and weaves more colourful patterns than those on any ornamented coat. Good scholars have noted how the key words of the Josef tale are mentioned here at the start: love, ill (or evil), dream, words, hatred. Often sibling hatred in folk-tales is unjustifiable, springing from malevolence, but here is understandable: the young Josef is not an attractive character, with his tale-bearing and his arrogant dreams, which he must know, should be kept to himself.

His behaviour is motivated by his father’s unwise favouritism, which is hardly excused by the fact that Yosef is a son of his old-age, especially when his brother Benyamin is younger still. The audience would also note the unacceptable phallic boast of the upright sheaf and the others.

The speed of the storytelling provides the audience with a grasp of the main characters and their relationship in a few verses which we cannot hear without thinking of our own childhoods, our dreams, our jealousies. All the stories in Genesis move within the common experiences of life even if they move into ones that are more unusual. God’s chosen partners are not saints, although they are capable of great acts of courage, imagination  and generosity.

21 And they compel to go with them a certain passer-by, Simon, a Cyrenian, coming from the field, the father of Alexander and Rufus, that he might carry his cross.

22 And they bring him to the place called Golgotha, which, being interpreted, is Place of a skull.

23 And they offered him wine medicated with myrrh; but he did not take it.

24 And having nailed him to the stake, they part his clothes amongst themselves, casting lots on them, what each one should take.

25 And it was the third hour, and they nailed him to the stake.

26 And the superscription of what he was accused of was written up: The King of the Jews.

27 And with him they crucify two robbers, one on his right hand, and one on his left.

Mark is also a master narrator, including only those details that enable his readers to imagine an agonising and ignominious death. Some of his readers might have been familiar with this Roman punishment, which was only used with slaves and foreigners, but Mark gives the brief essential details those unfamiliar with it to grasp the bleak horror of this event. As I’ve noted a few days ago, many of these details match passages from the Jewish Bible, especially from Isaiah chapters 50 and 53, but from other books also. The detail about wine (vinegar) is found in Psalm 69: 21; and the detail of dividing clothes from Ps. 22:18, the latter psalm having a profound influence on this story, and perhaps on Jesus himself. The accompaniment of robbers is prophesied in Isaiah 53:12. Some scholars hold that these existence of these apparent proof-texts puts into question the details which Mark gives. May not the whole story be woven from such texts and used because no disciples in fact witnessed the crucifixion?

Mark admits that no male disciples were present, although the “father of Alexander and Rufus” (perhaps known to Mark’s first readers as members of their believing community) may have been a witness, as were the women disciples whom Mark mentions in verses 40-41. I think it very likely that stories of Jesus’ death were passed on by the disciples after the resurrection and subsequently aligned with passages of scripture. Without doubt Mark  would have regarded such passages as carrying the meaning of Jesus’ death more accurately than mere memories. They indicate first of all that this terrible event is not outside the scope of God’s purposes, but rather fulfils them, and they place Jesus within the story of Israel’s own suffering and the suffering of its saints and prophets. Although Jesus has been rejected and “delivered up” by his own people he is nevertheless fulfilling their destiny under God.

I have changed the translation, “they crucified” Jesus into they “nailed him to the stake” to remind Christian readers that crucifixion is not something religious that happened only to Jesus but something brutal that was done to Jesus and others regarded as criminal scum by Romans. We should take note as we read Mark that Jesus’ death is not heroic, as it becomes in the other Gospels who have more words of Jesus from the cross. In this Gospel we are given only one insight into Jesus’ feelings, and that, as we shall see, is not edifying.