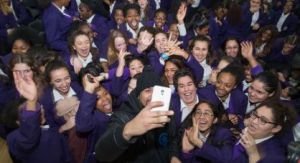 Now when Yosef was brought down to Egypt,

Potifar, and official of Pharaoh, the chief of the guard and an Egyptian man, acquired him from the hand of the Yishmaelities who brought him down there.

But YHWH was with Yosef, so that he became a man of success,

while he was in the house of his ord the Egyptian.

His Lord saw that YHWH was with him,

so that whatever he did, YHWH made succeed in his hands.

Yosef found favour in his eyes, and he waited on him;

he appointed him over his house and everything belonging to him he placed in his hands.

And it was, that from when he appointed hin over his house and over everything that belonged to him,

that YHWH blessed the Egyptian’s house because of Yosef

YHWH’s blessing was upon everything that belonged to him, in the house and in the fields.

So he left everything that was his in Yosef’s hands,

not concerning himself about anything with him there, except for the bread he ate.

Now Yosef was fair of form and fair to look at.

After these events it was

that his lord’s wife fixed here eyes upon Yosef and said:

he said to his lord’s wife:

Look, my lord need not concern himself with anything in this house, with me here,

and everything that belongs to him he has placed in my hands.

He is no greater in this house than I

and has withheld nothing from me,

since you are his wife.

Sod how could  do this great ill?

I would be sinning against God!

Now it was, as she would speak to Yosef day after day, that he would not hearken to her, to lie with her, to be with her-

when he came into the house to do his work

that she grabbed him by his garment, saying: 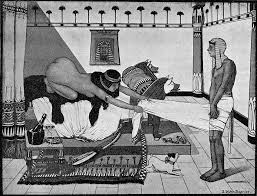 For obvious resons this incident us a favourite with artists. This by Kuhn-Regnier 1910 is the funniest I know

But he left his garment in her hand and escaped outside.

Now it was, when she saw that he had left his garment in her hand and had fled outside,

that she called in her house people and said to them:

See! He has brought to us

A Hebrew man to play around with us!

He came to me, to lie with me,

but I called out with a loud voice,

and it was, when he heard that I lifted up my voice and cried aloud,

that he left his garment beside me a fled, escaping outside!

And she kept the garment beside her until his lord came back to the house,

Then she spoke to him according to these words, saying:

There came the Hebrew servant you brought to us, to play around with me,

but it was, when I lifted up my voice and called out,

that he left his garment beside me and fled outside.

Now it was, when his lord heard his wife’s words which she spoke to him

saying, According to these words, your servants did to me! –

that his anger flared up

Yosef’s lord took him and put him in the dungeon house,

in the place where the king’s prisoners are imprisoned.

If you want to check the subtlety of this storyteller, ask yourself if you think Yosef is entirely innocent in this matter. If you are like me, you will answer no, but you will not find any word or phrase which justifies this view. Of course Potifar’s wife is a powerful, clever and abusive woman, used to getting what she wants, especially from a slave, but is there something in Yosef’s tact, in his refusal solely on the grounds that it would injure her husband, that actually inflames her passion? Certainly a blunter refusal would have incurred her enmity, and might have involved Yosef losing his position of which he is so inordinately proud that he boasts of it even in the act of refusal. We mustn’t take this too far, but we might extend the blame to YHWH himself who has so favoured his beloved Yosef that he would have to be a saint not to get a little swell-headed.

Yosef is still learning what YHWH’s blessing is for, and he passes the test posed by Potifar’s wife, but only just.

The storytelling and the dialogue are particularly vivid in this scene, which begins to chart a theme popular in Jewish and other folklore of the Jewish/ African/ Scottish prisoner/slave who shows his mettle in a foreign land. In the case of Yosef, as of Daniel, credit is given not just to the hero but also to YHWH, who is revealed as just as capable of action in Egypt as in Canaan and Mesopotamia.

42 And when it was already evening, since it was the preparation, that is, before a Sabbath,

43 Joseph of Arimathaea, an honourable councillor, who also himself was awaiting the kingdom of God, coming, emboldened himself and went in to Pilate and begged the body of Jesus.

44 And Pilate wondered if he were already dead; and having called to him the centurion, he inquired of him if he had long died.

45 And when he knew from the centurion, he granted the body to Joseph.

47 And Mary of Magdala and Mary the mother of Joses saw where hewas put.

The entombment of Jesus was an important fact to the first believers as it confirmed his death. Some versions of the crucifixion story, which may been told quite early in the history of the churches, made out that Jesus had not died on the cross, or that only his material body was crucified, while he remained alive in the spirit. The mainstream Christian communities rejected these views, and insisted on the ordinary, complete death of Jesus. For them resurrection was not a form of survival but rather of new creation.

Mark is careful to give his narrative the smell of history, naming Joseph as the rescuer of Jesus’ body and the women as witnesses of where he was buried. I say, “the smell of history” without prejudice. These may be historical facts, but Mark’s artistry is such that he may be simply selecting details from a variety of sources. Joseph is confirmed in this role in all the later Gospels, which may be because they are using the same source as Mark or because they are copying him. Some modern scholars have urged the unlikelihood of the scattered disciples knowing anything about the body of Jesus, which in their view might well have been thrown on a rubbish heap and eaten by scavenging animals. Such an eventuality would not alter my faith. Indeed I am scandalously on record as stating that most probably the bones of Jesus are in Palestine, and that their discovery would make no more difference to my faith in Jesus’ resurrection, than my knowledge of where my mother’s bones lie makes to my faith in hers.

Mark’s account of Jesus’ suffering is deliberately bleak. Bad things are done to him, his enemies are triumphant, his friends are largely absent, he feels abandoned by God he dies, he is dead and buried. And also, in this suffering, he is the son of God who tears away the veil of religion to reveal the reality of God. Mark certainly composed his account with Isaiah 50 and 53 in mind; we should read it along with these chapters.

Tags: Joseph and Potiphar's wife, The entombment of Jesus