I was taking Genesis and the Gospel of Mark in tandem since 01/01/2015, but since completing Mark have continued with Genesis alone. The series can be accessed from my archive. The daily headlines are reminders of the world we live in.

AL BAGDADI CALLS ON ALL MUSLIMS TO JOIN THE VIOLENT KALIFATE I.S. 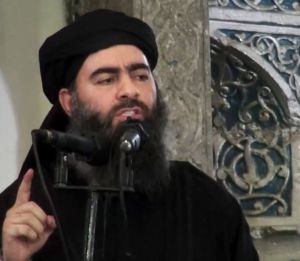 28 Ya‘akov lived in the land of Egypt seventeen years; thus Ya‘akov lived to be 147 years old. 29 The time came when Isra’el was approaching death; so he called for his son Yosef and said to him, “If you truly love me, please put your hand under my thigh and pledge that, out of consideration for me, you will not bury me in Egypt. 30 Rather, when I sleep with my fathers, you are to carry me out of Egypt and bury me where they are buried.” He replied, “I will do as you have said.” 31 He said, “Swear it to me,” and he swore to him. Then Isra’el bowed down at the head of his bed.

48 Awhile later someone told Yosef that his father was ill. He took with him his two sons, M’nasheh and Efrayim. 2 Ya‘akov was told, “Here comes your son Yosef.” Isra’el gathered his strength and sat up in bed. 3 Ya‘akov said to Yosef, “El Shaddai appeared to me at Luz in the land of Kena‘an and blessed me, 4 saying to me, ‘I will make you fruitful and numerous. I will make of you a group of peoples; and I will give this land to your descendants to possess forever.’ 5 Now your two sons, who were born to you in the land of Egypt before I came to you in Egypt, are mine; Efrayim and M’nasheh will be as much mine as Re’uven and Shim‘on are. 6 The children born to you after them will be yours, but for purposes of inheritance they are to be counted with their older brothers.

7 “Now as for me, when I came from Paddan, Rachel died suddenly, as we were traveling through the land of Kena‘an, while we were still some distance from Efrat; so I buried her there on the way to Efrat (also known as Beit-Lechem).”

8 Then Isra’el noticed Yosef’s sons and asked, “Whose are these?” 9 Yosef answered his father, “They are my sons, whom God has given me here.” Ya‘akov replied, “I want you to bring them here to me, so that I can bless them.” 10 Now Isra’el’s eyes were dim with age, so that he could not see. Yosef brought his sons near to him, and he kissed them and embraced them. 11 Isra’el said to Yosef, “I never expected to see even you again, but God has allowed me to see your children too!” 12 Yosef brought them out from between his legs and prostrated himself on the ground. 13 Then Yosef took them both, Efrayim in his right hand toward Isra’el’s left hand and M’nasheh in his left hand toward Isra’el’s right hand, and brought them near to him. 14 But Isra’el put out his right hand and laid it on the head of the younger one, Efrayim, and put his left hand on the head of M’nasheh — he intentionally crossed his hands, even though M’nasheh was the firstborn. 15 Then he blessed Yosef: “The God in whose presence my fathers Avraham and Yitz’chak lived, the God who has been my own shepherd all my life long to this day, 16 the angel who has rescued me from all harm, bless these boys. May they remember who I am and what I stand for, and likewise my fathers Avraham and Yitz’chak, who they were and what they stood for. And may they grow into teeming multitudes on the earth.”

17 When Yosef saw that his father was laying his right hand on Efrayim’s head, it displeased him, and he lifted up his father’s hand to remove it from Efrayim’s head and place it instead on M’nasheh’s head. 18 Yosef said to his father, “Don’t do it that way, my father; for this one is the firstborn. Put your right hand on his head.” 19 But his father refused and said, “I know that, my son, I know it. He too will become a people, and he too will be great; nevertheless his younger brother will be greater than he, and his descendants will grow into many nations.” 20 Then he added this blessing on them that day: “Isra’el will speak of you in their own blessings by saying, ‘May God make you like Efrayim and M’nasheh.’” Thus he put Efrayim ahead of M’nasheh.

21 Isra’el then said to Yosef, “You see that I am dying, but God will be with you and will bring you back to the land of your ancestors. 22 Moreover, I am giving to you a share more than to your brothers; I captured it from the Emori with my sword and bow.”

The aged Yaakov does not forget the promise of YHWH with regard to the land of Canaan. It might have seemed that the future of his family was in Egypt but Yaakov does not think so. His earthly journey must end where it began. And indeed there are similarities between events Yaakov beginning and his ending. Yosef comes to get Yaakov’s blessing, just as he had come to his father Yitzhak. In this case the son comes with honest intentions to the blind father, but finds that the father is playing tricks, out of his conviction that the younger son’s descendants will be more important than those of the elder (as indeed the tribe of Ephraim became dominant in Israel’s later history. This  means that the story of Yaakov’s blessing has been influenced by subsequent history.) Yitzhak was deceived in his blessing, whereas in this case both Yaakov and Yosef know what is being  done.

We are reminded that Yaakov is Israel, whose struggle with God has earned him this title and the right to determine the future of his family even after the reversal of roles which has seen his son Yosef acting as a father-protector to him. Present power is with Yosef who has realised his own dream, but Yaakov is the bearer of a greater dream of YHWH’s partnership with his family which will bring blessing to all families. He is the one who knows, in spite of his secular competence, that the messengers of God are in ceaseless traffic between heaven and earth. 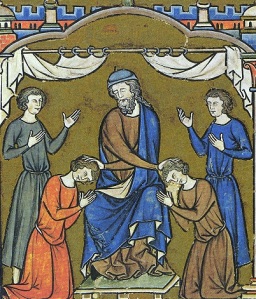 The whole episode embodies the faith of the Jewish people, which is based on trust in an invisible and transcendent God; but which is only occasionally expressed religiously, in sacrifice and shrines. Far more often it is expressed in marriage, children, family loyalty, storytelling, living in the land of promise, choosing goodness rather than evil. It is so different from Chriatianity and other world faiths, that we must be careful not to distort the tradition that nurtured Jesus of Nazareth.

Tags: the blessing of Jacob, Uniqueness of Jewish faith