Today I am starting a new blog project: I will comment on the whole Corinthian correspondence of St Paul, in the order in which I think it was composed. I think the bible contains most of the correspondence, with the exception of an initial lost letter in which Paul raised the question of sexual morality. 1st Corinthians takes it up again along with other topics after Paul received a report via Chloe whom he mentions. Chapters 10-13 of 2 Corinthians are a severe letter demanding obedience, while chapters 1-9 are a final more conciliatory letter. I think that all of these were written from Ephesus where Paul was detained by the Roman authority. Readers who like historical fiction may care to look at my novel about Paul:

I will use the Complete Jewish Bible as altered by me, and will provide daily headlines as reminders of the world we live in. 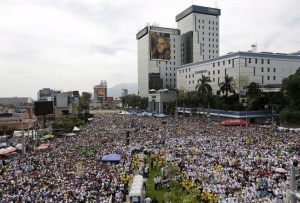 1 From: Paul, called by God’s will to be an emissary of the Messiah Jesus; and from brother Sosthenes

2 To: God’s Assembly in Corinth, consisting of those who have been set apart by jesus the Messiah and called to be God’s holy people — along with everyone everywhere who calls on the name of our Lord Jesus the Messiah, their Lord as well as ours:

3 Kindness to you and peace from God our Father and the Lord Jesus the Messiah.

4 I thank my God always for you because of God’s love and kindness given to you through the Messiah Jesus, 5 in that you have been enriched by him in so many ways, particularly in power of speech and depth of knowledge. 6 Indeed, the testimony of the Messiah has become firmly established in you; 7 so that you are not lacking any spiritual gift and are eagerly awaiting the revealing of our Lord Jesus the Messiah. 8 He will enable you to hold out until the end and thus be blameless on the Day of our Lord Jesus the Messiah — 9 God is trustworthy: it was he who called you into partnership with his Son, Jesus the Messiah, our Lord.

Paul had received information from ‘some of Chloe’s people’ about problems in the Assembly at Corinth, which divided it into competitive groups, encouraged lax ethics, and insulted the poorer members of the assembly. Paul seems to trace these problems to a poor understanding of the crucifixion of Jesus, and perhaps, to teaching that put knowledge before love. It’s also clear that Paul thinks his own authority as an emissary of Jesus Messiah is being undermined.

With this in mind his formal greetings above are filled with the name of Jesus, as if to persuade his converts of the origin of their faith. It has  not come from philosophical wisdom but from a  crucified Jewish man, whom Paul believes is the promised Messiah of his people.(It seems good to me to translate the title given to Jesus, as at this early stage of the development of the church, it would not have become a meaningless second name as it has ever since).

The letter would have been read out to the whole assembly, so we should regard its rhetoric from the point of view of hearers rather than readers. He identifies himself with his Greek name Paul used as a familiar version of his Jewish name Sha’ul. He was known to the Assembly as the original father of its faith, although other emissaries and preachers were also known by them. He identifies his audience as an assembly of God, using the word for a secular assembly called by a ruler or senate to attend to public business. Like another of Paul’s favoured terms ‘partnership’ he uses a common expression from civic and commercial life to describe the followers of Jesus Messiah. They are not a new religion.

He reminds them that they are ‘set apart’ and ‘called to be a holy people.’ This language, which Jews would have used to characterise their uniqueness is now applied by Paul to the Jesus people of Corinth. They have this status though the Messiah, that is, not in their own right but because they belong to the Messiah. Being God’s assembly is an arduous calling as well as a privilege, and requires discipline. It is not a sectarian identity as if it belonged to them alone, but is shared with people all round the world who ‘call on’  the name ofJesus Messiah. This phrase which is used in Genesis of the faith of the patriarchs in God, is used here of Jesus as God’s Messiah. The ecumenical dimension of trust in Jesus is rarely absent in Paul. Even in these very few words Paul,is already reminding his audience of their trust in Messiah Jesus which grants them special status under God and unites them with followers of Jesus throughout the world.

Then he wishes for them the fundamental goodness of God in which he and they stand together, specifically God’s kindness and peace. The latter word is the Hebrew shalom, meaning comprehensive safety and fruitfulness. Kindness is the Greek word often translated grace, which I’ve avoided because it has become a technical term of theology and the subject of debate if not warfare amongst Christians. It means the generous kindness of God as seen in Jesus. 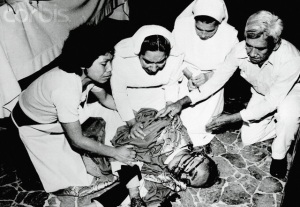 Paul always gives thanks for an Assembly even if he is giving it a rollicking. Here he acknowledges gratefully exactly the qualities which he thinks the Corinthians have misused. They are spiritually rich especially in speech and knowledge. But he reminds them that these are gifts rather than achievements. He tells them the testimony of Jesus has become firmly established amongst them. Most translators see this as apostolic testimony about Jesus. I see it as Jesus own testimony to God in his life and death. The life of the Assembly is oriented not the present but to a future ‘end’ when Jesus will be fully revealed as Lord. Although the Messiah’s role as Judge is not mentioned, the word blameless reminds the audience that they have to face scrutiny. But even the hint of judgment provokes Paul to insist on God’s trustworthiness: God will keep all his promises , especially those implicit in inviting people into partnership with his son, Jesus Messiah. The word partnership speaks of a common life in which God participates.

All the theological motifs used here by Paul tell the Corinthian troublemakers, that God’s assembly is not the place for power games.