Today the blog continues its examination of St. Paul’s Corinthian correspondence. Previous material on this topic and on Genesis and Mark, can be accessed from my archive. Biblical references can be placed after emmock.com as can particular topics eg. emmock.com John 3:16; or emmock.com obedience. The daily headlines are reminders of the world we live in.

9 Am I not a free man? Am I not an emissary of the Messiah? Haven’t I seen Jesus our Lord? And aren’t you yourselves the result of my work for the Lord? 2 Even if to others I am not an emissary, at least I am to you; for you are living proof that I am the Lord’s emissary. 3 That is my defense when people put me under examination.

4 Don’t we have the right to be given food and drink? 5 Don’t we have the right to take along with us a believing wife, as do the other emissaries, also the Lord’s brothers and Kefa? 6 Or are Bar-Nabba and I the only ones required to go on working for our living? 7 Did you ever hear of a soldier paying his own expenses? or of a farmer planting a vineyard without eating its grapes? Who shepherds a flock without drinking some of the milk? 8 What I am saying is not based merely on human authority, because the Torah says the same thing — 9 for in the Torah of Moses it is written, “You are not to put a muzzle on an ox when it is treading out the grain.” If God is concerned about cattle, 10 all the more does he say this for our sakes. Yes, it was written for us, meaning that he who plows and he who threshes should work expecting to get a share of the crop. 11 If we have sown spiritual seed among you, is it too much if we reap a material harvest from you? 12 If others are sharing in this right to be supported by you, don’t we have a greater claim to it?

15 But I have not made use of any of these rights. Nor am I writing now to secure them for myself, for I would rather die than be deprived of my ground for boasting! 16 For I can’t boast merely because I proclaim the Good News — this I do under compulsion: grief to me if I don’t proclaim the Good News! 17 For if I do this willingly, I have a reward; but if I do it unwillingly, I do it simply because I’ve been given a household chore. 18 So then, what is my reward? Just this: that in proclaiming the Good News I can make it available free of charge, without making use of the rights to which it entitles me.

Paul describes his status in two ways: as a Roman citizen, he is a freeman; as a believer he is an emissary because he has “seen” Jesus Messiah, that is he counts himself as the last of a sequence of resurrection appearances of Jesus, by which people became emissaries of the Announcement, the God News of God.

He makes the point at length that emissaries are entitled to material support from the believing assemblies. He mentions that this is an instruction of Jesus. He refers to the expectation of the emissaries that their continued work will be enabled by those who have benefited from their ministry. We know that the Philippian assembly did this for Paul long after he left them to minister elsewhere. Paul however prided himself on his marketable skill as a leather worker/ tentmaker and earned his own living in most of the places he worked.He says he wants to be able to “boast” using the very term with which he has chided some of the Corinthians for their arrogance. Perhaps he is aware of the apparent contradiction and is laughing at himself for being proud of working for nothing. More seriously he says that proclaiming the gospel is not a choice for him but a necessity. If he didn’t do it, he would be stepping outside the circle of God’s goodness! That’s a revealing insight into Paul’s sense of vocation. We are reminded of Jeremiah trying not to proclaim God’s word but finding that it was ” as a fire burning in my bones and I could not keep it in. ”

He goes on to describe his practice as an emissary: he adapts his lifestyle and doubtless his style of preaching to the people amongst whom he finds himself, so that they may not reject the gospel because of his foreign habits or the 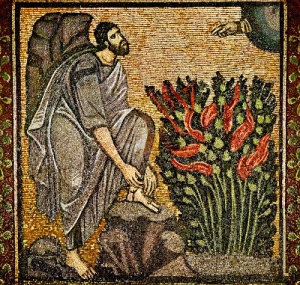 The God of Moses,” I have come down to rescue my people”

language of his preaching. He makes the point, that BECAUSE he is free and accredited by Jesus Messiah, he CAN adapt to his hearers. His use of the word “rescue” (save) has a long history amongst the Jewish people, including the story of the Exodus where God says, “I have seen the affliction of my people…. and have come down to rescue them.” God desires to rescue his people because they have a crucial role to play in bringing his blessing to all peoples. Although Paul did not believe that God had forsaken his Jewish people, he believed that their status and their task were now shared by the messianic Assemblies in the Roman empire and beyond. People are rescued so that they become channels of God’s blessing to the world.

Tags: Paul becomes all things to all people, Paul preaches under compulsion