In Bible blog I have just completed a look at Paul’s correspondence with the Corinthian Assembly. You can find these and all my 1772 blogs by date on my archive, or by googling: emmock.com topic, or emmock.com bible reference. My new project is an examination of The Revelation, the final book in the Christian Bible. It’s controversial but fun, offering trumpets, angels, the four horsemen, a beast from sea and the whore of Babylon. What’s not to like? It begins on 30th July. Join me. The headlines are reminders of the world we live in:

Saudi King’s holiday over; Vallauris residents get their beach back ( El Pais)

The Message to Ephesus

2 ‘To the angel of the church in Ephesus write: These are the words of him who holds the seven stars in his right hand, who walks among the seven golden lampstands:

2 ‘I know your works, your toil and your patient endurance. I know that you cannot tolerate evildoers; you have tested those who claim to be apostles but are not, and have found them to be false. 3 I also know that you are enduring patiently and bearing up for the sake of my name, and that you have not grown weary. 4 But I have this against you, that you have abandoned the love you had at first. 5 Remember then from what you have fallen; repent, and do the works you did at first. If not, I will come to you and remove your lampstand from its place, unless you repent. 6 Yet this is to your credit: you hate the works of the Nicolaitans, which I also hate. 7 Let anyone who has an ear listen to what the Spirit is saying to the churches. To everyone who conquers, I will give permission to eat from the tree of life that is in the paradise of God. 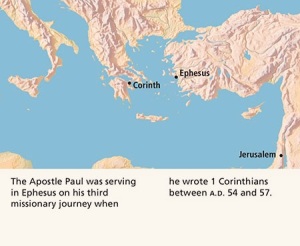 The seven church assemblies of Asia were real, strung along one of the great Roman roads, but these are not real letters. Rather, they are part of the revelation received and transmitted by the author, a ve. ry important part, however, because they indicate the the purpose of the the whole composition: the welfare of the Assemblies. The “letters” show the Assemblies as they are, certainly not as perfect believers; nevertheless, their trust and courage and suffering are the human reality of the victory of God revealed in the book’s visions. Whatever strange scenes are depicted, however cosmic their dimensions, they will represent the life and beliefs of these assemblies. They, in their human imperfection, are the key to understanding the visions that follow.

The letters have a consistent form:

I have not mentioned the mysterious Nikolaitans whom the Lord detests, as no scholar has been able to identify them. Doubtless they are some kind of sect or movement within some assemblies.

The Temple of Artemis at Ephesos

There is no reason to doubt that real pastoral concern and knowledge are contained in the “letters” Ephesos was one of the largest cities in the Empire, a centre for the cult of Artemis, and at one time Paul’s HQ. There had been an assembly there since around 50 CE. Members of its assembly are depicted in The Acts of the Apostles as showing great love towards Paul.