In Bible blog I have just completed a look at Paul’s correspondence with the Corinthian Assembly. You can find these and all my 1772 blogs by date on my archive, or by googling: emmock.com topic, or emmock.com bible reference. My new project is an examination of The Revelation, the final book in the Christian Bible. It’s controversial but fun, offering trumpets, angels, the four horsemen, a beast from sea and the whore of Babylon. What’s not to like? It begins on 30th July. Join me. The headlines are reminders of the world we live in: 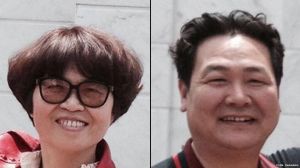 The Message to Smyrna

8 ‘And to the angel of the church assembly in Smyrna write: These are the words of the first and the last, who was dead and came to life:

9 ‘I know your affliction and your poverty, (but you are rich!). I know the slander on the part of those who say that they are Jews and are not, but are a synagogue of the Adversary. 10 Do not fear what you are about to suffer. Beware, the devil is about to throw some of you into prison so that you may be tested, and for ten days you will have affliction. Be faithful until death, and I will give you the crown of life. 11 Let anyone who has an ear listen to what the Spirit is saying to the churches. Whoever conquers will not be harmed by the second death.

The Message to Pergamum

12 ‘And to the angel of the church assembly in Pergamum write: These are the words of him who has the sharp two-edged sword:

13 ‘I know where you are living, where Satan’s throne is. Yet you are holding fast to my name, and you did not deny your faith in me even in the days of Antipas my witness, my faithful one, who was killed among you, where the Adversary lives. 14 But I have a few things against you: you have some there who hold to the teaching of Balaam, who taught Balak to put a stumbling-block before the people of Israel, so that they would eat food sacrificed to idols and practise fornication. 15 So you also have some who hold to the teaching of the Nicolaitans. 16 Repent then. If not, I will come to you soon and make war against them with the sword of my mouth. 17 Let anyone who has an ear listen to what the Spirit is saying to the churches. To everyone who conquers I will give some of the hidden manna, and I will give a white stone, on which is written a new name that no one knows except the one who receives it. 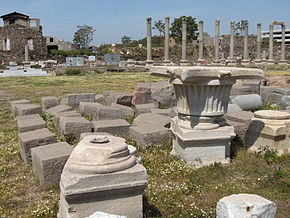 the Agora at Smyrna

These “letters” are part of the structure of the whole book of The Revelation, and set the scene for all that follows. The great battles of the prophet’s visions are simply the struggles of the seven church assemblies seen for what they really are: part of the conflict between God and his Adversary, between the Source of good and the sources of evil. The message of the whole book is simply a cosmic repetition of the counsels given by the Spirit in these letters.

In today’s extract I have used two “letters” which use the same pattern laid down by the letter to Ephesos (see blog 1774). The assemblies are designated by the names of the Greek cities on the coast of what is now Turkey. The writer moves firstly north up the coast from  Ephesos, to Smyrna and Pergamum before turning South East via Thyatyra, Sardis and  Philadelphia, to Laodicea.

Jesus, the sender of the message is here described as the one who died and came to life again, because the Smyrnans are in danger of life-threatening persecution. Praise is given to the assembly which although materially poor is in fact wealthy in trust and courage. The risen one knows that Jewish people, or perhaps Christian teachers with a reverence for Jewish practice, are causing trouble for the assembly. Given that the Jewish synagogues were officially permitted by the Roman authority, the accurate allegation that the Assemblies of Jesus were not Jewish, could provoke action by the Roman state.It is as well to translate the word Satan rather than turning it into a proper name. It points to the power opposed to God, which is often behind the powers of the state in their swift and violent ways of controlling the empire. To Roman officials such actions would be seen as a little local difficulty easily resolved, whereas for John the writer and Jesus, the speaker of the message, it is an instance of rebellion against God. Roman winners of sports, arts and battles  were given crowns; here Jesus promises faithful Smyrnans a “crown of life”, invisible to the Romans who kill them, but real to those who have faith as God’s recognition of their victory over worldly power, and as the gift of eternal life. Faithful people may be threatened with death but will not be touched by what Revelation calls the “second death”, the total absence of life, which is the fate of the evil powers and their allies. 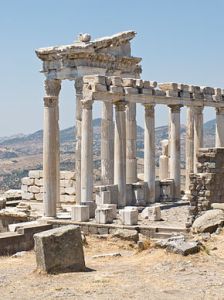 Temple of Trajan at Pergamum

For the Pergamans, Jesus flourishes the sharp, two-edged sword of his word, because he wants to cut through the false teachings of the “Nicolaitans”, but first there is praise for Antipas who by his faithfulness to death has revealed how the wisdom of Jesus cuts through the lies of power. In this case the Adversary is identified as occupying the Roman Administration. The references to Balaam and Balak whose stories are in Numbers 22-24, points especially to Numbers 31 in which they are accused of tempting the Israelites to worship foreign Gods and take foreign wives.The implication is that the Nicolaitans are teaching some kind of assimilation to the surrounding culture. Jesus promises to go to verbal war against all such. Believers are to be ruthless in their worship and morality. Any kind of assimilation will weaken their battle against the powers of evil. Believers today who urge the church to do X because “it’s the 21st century”, or “young people today are not interested in that sort of thing” might do well to consider this criticism.

The hidden manna is a form of spiritual nourishment reserved in Jewish speculation for the time of the Messiah. Perhaps it means the Lord’s Meal. As for the white stone, it’s said that these were issued to victors at The Games who were invited to the Emperor’s banquet. Jesus promises to feed the needy believers and to give them seats at his victory banquet. The “new name” may be one of the titles given to Jesus; if so, I would favour “The Lamb” which in Revelation becomes a divine name, “The Lamb who is in the midst of the throne.”

These church assemblies, threatened by the Roman State, may seem distant from the life of many churches in Europe and the USA but quite close to churches in many other parts of the world which are at risk either from the state or from terrorists. In sober fact, those who remain faithful to Jesus in the face of persecution remind us of the origins of the church and the sacrifice of its Lord. We should be glad of peace and the rule of law, but we should not lose the discipline which was developed in the face of danger.