In Bible blog I have just completed a look at Paul’s correspondence with the Corinthian Assembly. You can find these and all my 1778 blogs by date on my archive, or by googling: emmock.com topic, or emmock.com bible reference. My new project is an examination of The Revelation, the final book in the Christian Bible. It’s controversial but fun, offering trumpets, angels, the four horsemen, a beast from the sea and the whore of Babylon. What’s not to like? It begins on 30th July. Join me. The headlines are reminders of the world we live in: 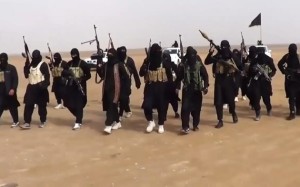 The Message to Sardis

3 ‘And to the angel of the church in Sardis write: These are the words of him who has the seven spirits of God and the seven stars:

‘I know your works; you have a name for being alive, but you are dead. 2 Wake up, and strengthen what remains and is at the point of death, for I have not found your works perfect in the sight of my God. 3 Remember then what you received and heard; obey it, and repent. If you do not wake up, I will come like a thief, and you will not know at what hour I will come to you. 4 Yet you have still a few people in Sardis who have not soiled their clothes; they will walk with me, dressed in white, for they are worthy. 5 If you conquer, you will be clothed like them in white robes, and I will not blot your name out of the book of life; I will confess your name before my Father and before his angels. 6 Let anyone who has an ear listen to what the Spirit is saying to the churches.

The Message to Philadelphia

7 ‘And to the angel of the church in Philadelphia write:
These are the words of the holy one, the true one,
who has the key of David,
who opens and no one will shut,
who shuts and no one opens:

8 ‘I know your works. Look, I have set before you an open door, which no one is able to shut. I know that you have but little power, and yet you have kept my word and have not denied my name. 9 I will make those of the synagogue of the Adversary who say that they are Jews and are not, but are lying—I will make them come and bow down before your feet, and they will learn that I have loved you. 10 Because you have kept my word of patient endurance, I will keep you from the hour of trial that is coming on the whole world to test the inhabitants of the earth. 11 I am coming soon; hold fast to what you have, so that no one may seize your crown. 12 If you conquer, I will make you a pillar in the temple of my God; you will never go out of it. I will write on you the name of my God, and the name of the city of my God, the new Jerusalem that comes down from my God out of heaven, and my own new name. 13 Let anyone who has an ear listen to what the Spirit is saying to the churches.

The Message to Laodicea

14 ‘And to the angel of the church in Laodicea write: The words of the Amen, the faithful and true witness, the origin[a] of God’s creation:

15 ‘I know your works; you are neither cold nor hot. I wish that you were either cold or hot. 16 So, because you are lukewarm, and neither cold nor hot, I am about to spit you out of my mouth. 17 For you say, “I am rich, I have prospered, and I need nothing.” You do not realize that you are wretched, pitiable, poor, blind, and naked. 18 Therefore I counsel you to buy from me gold refined by fire so that you may be rich; and white robes to clothe you and to keep the shame of your nakedness from being seen; and salve to anoint your eyes so that you may see. 19 I reprove and discipline those whom I love. Be earnest, therefore, and repent. 20 Listen! I am standing at the door, knocking; if you hear my voice and open the door, I will come in to you and eat with you, and you with me. 21 To the one who conquers I will give a place with me on my throne, just as I myself conquered and sat down with my Father on his throne. 22 Let anyone who has an ear listen to what the Spirit is saying to the churches.’

Here are the final three of the “letters” to the church assemblies of Asia of which the author, John, is an exiled leader. We have an assembly that needs to waken up, one which is faithful but facing persecution and one which is affluent and self-deceived.

The assembly in Sardis is reminded that the message comes from Jesus who holds the the seven spirits and the seven stars. This resolves the question as to whether these were clearly distinguished by the author. So we must conclude that the seven spirits are the source of God’s wisdom while the seven angels are the heavenly messengers who deliver it to the churches, which does not exclude them being flesh and blood prophets like the author who can receive and transmit the heavenly wisdom. White clothing is a sign of martyrdom; it represents the purity of those who refuse contact with the gods of the world, specifically perhaps, the deified Roman Emperors whose cult united the empire. The false Jews may be actual Jews who have rejected Jesus as their Messiah. For this assembly, being awake means being resolute against all pressure to assimilate to the cultures of the empire and of Greek society. Those who keep their clothes clean by resisting this pressure are promised that their names will stand in the book of life, and that Jesus will acknowledge them in the presence of the Father. Similar words about the mutual acknowledgement of Jesus and his disciples are found also in the gospels, as is the phrase which compares the returning Lord to a thief. The promise of undying life is crucial to the life of these church assemblies.

The assembly at Philadelphia is praised by Jesus who holds the key of David, presumably, the key to God”s Reign, which gives and refuses access to God’s goodness.This faithful church has been offered an open door, which turns out to be identical to a time of suffering which will test their faith!  In their faithfulness they will use this as a way into God’s Rule. This is an example of the kind of paradoxical language which will become a structural element in the rest of the book. Something that from a worldly viewpoint would be called a disaster, can be described in positive terms from a heavenly point of view. What  the world sees as defeat by the powers of the empire can be called conquest in the language of heaven.The promise of being a pillar in the temple, means being an honoured leader in the heavenly assembly, confirmed as such by the names of God, of the heavenly community and of the risen Jesus. If we think of this as a kind of Trinitarian formula we can see that the Holy City,  the community of those who share God’s life, takes the expected place of the Holy Spirit. That’s because it is the “communion” of the Spirit. Jesus’ new name is presumably the Greek, Kyrios, translated Lord, which is the word used in the Greek version of the Jewish Bible to translate the name of God, because he shares the Father’s throne. 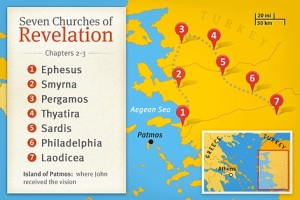 The last assembly addressed is the subject of the most bitter rebuke. It has become easy in its assimilation to the imperial culture, imagining itself to be rich  when it is very poor in true faith. The writer calls Jesus the Amen, a term maybe derived from St Paul who called Jesus the yes and amen to all the promises of God.He is also called the beginning of God’s creation, that is, the One active in all the processes of creation from start to finish.It might be better in verse 14, to translate the Greek arche as the “principle of God’s creation”, rather than the”beginning”. The words of Jesus strip away the worldly clothing of the assembly to reveal it as wretched, miserable, poor, blind and naked in its faith and discipleship. As the city was known for its, wealth, wool and  medical school, the references to refined gold (goodness tested by adversity) white clothes (the purity of faithful witnesses in the face of death) and ointment (teaching that opens the mind to truth), may have seemed appropriate.

Jesus’ beautiful words about standing at the door, knocking, have been variously interpreted. Since I read Solzhynitsyn’s “Gulag” I have always been aware that for people under persecution a “knock on the door” would not be welcome, as it might be agents of the state. If the author was also conscious of this meaning it would have added to the possibility that Jesus’ knocking might be dangerous. Another interpretation would see it as the knocking of someone, like the author, under the suspicion of the state, whom you might not want in your house. In any case the comfy, spiritual interpretation given by western piety -Jesus wants into your heart- may be wide of the mark. Those who eat with Jesus are always at risk, but they are promised that they will share God’s Rule of the world.

Today as I write, it would be easy to see our comfortable churches as lukewarm while more of the harassed Christians of Syria have been captured and held by so-called Islamic Caliphate  because of their faith.

From another perspective, it’s quite possible that Roman officials saw John’s Christians with their talk of God’s Rule somewhat as we we now see radical Muslims, that is, as people who put their faith before their citizenship and are therefore a danger. In fact these first Christians, were utterly non-violent, as many Muslims are today.