In Bible blog I have just completed a look at Paul’s correspondence with the Corinthian Assembly. You can find these and all my 1778 blogs by date on my archive, or by googling: emmock.com topic, or emmock.com bible reference. My new project is an examination of The Revelation, the final book in the Christian Bible. It’s controversial but fun, offering trumpets, angels, the four horsemen, a beast from the sea and the whore of Babylon. What’s not to like? It began on 30th July. Join me. The headlines are reminders of the world we live in: 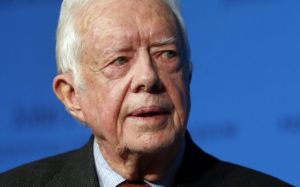 Then I saw the Lamb open one of the seven seals, and I heard one of the four living creatures call out, as with a voice of thunder, ‘Come!’ 2 I looked, and there was a white horse! Its rider had a bow; a crown was given to him, and he came out conquering and to conquer.

3 When he opened the second seal, I heard the second living creature call out, ‘Come!’ 4 And out came[c] another horse, bright red; its rider was permitted to take peace from the earth, so that people would slaughter one another; and he was given a great sword.

5 When he opened the third seal, I heard the third living creature call out, ‘Come!’[d] I looked, and there was a black horse! Its rider held a pair of scales in his hand, 6 and I heard what seemed to be a voice in the midst of the four living creatures saying, ‘A quart of wheat for a day’s pay,and three quarts of barley for a day’s pay, but do not damage the olive oil and the wine!’

7 When he opened the fourth seal, I heard the voice of the fourth living creature call out, ‘Come!’ 8 I looked and there was a pale green horse! Its rider’s name was Death, and Hades followed with him; they were given authority over a fourth of the earth, to kill with sword, famine, and pestilence, and by the wild animals of the earth.

9 When he opened the fifth seal, I saw under the altar the souls of those who had been slaughtered for the word of God and for the testimony they had given; 10 they cried out with a loud voice, ‘Sovereign Lord, holy and true, how long will it be before you judge and avenge our blood on the inhabitants of the earth?’ 11 They were each given a white robe and told to rest a little longer, until the number would be complete both of their fellow-servants and of their brothers and sisters, who were soon to be killed as they themselves had been killed.

12 When he opened the sixth seal, I looked, and there came a great earthquake; the sun became black as sackcloth, the full moon became like blood, 13 and the stars of the sky fell to the earth as the fig tree drops its winter fruit when shaken by a gale. 14 The sky vanished like a scroll rolling itself up, and every mountain and island was removed from its place. 15 Then the kings of the earth and the magnates and the generals and the rich and the powerful, and everyone, slave and free, hid in the caves and among the rocks of the mountains, 16 calling to the mountains and rocks, ‘Fall on us and hide us from the face of the one seated on the throne and from the wrath of the Lamb; 17 for the great day of their wrath has come, and who is able to stand?’ 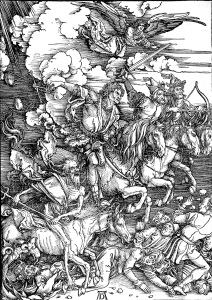 Right! So now we get into the sort of material usually associated with The Apocalypse, horsemen and killing and wrath! Yet perhaps none of it is to be interpreted in the usual way.

Remember,these are the seals that only the Lamb can open, meaning that these are the events that only the life and death of Jesus can reveal. I have set out already the principles of interpretation for this book. Heaven is the counterpart and the final future of earth. So the opening of the seals in heaven reveals is a counterpart to what is happening on earth as a result of Jesus’ life, death and resurrection. In other words the open seals give us a heavenly perspective on events that are already happening on earth and reveal their final outcome.

The vision of the four horsemen show the history of the earth vividly and succinctly. The powers that rule the earth, bringing distress to its inhabitants are: Conquest (white horse), Violence (red horse) Austerity or Hunger (black horse) and Plague (pale green horse). There are problems of interpretation: does the rider on the white horse represent an invasion of the Empire by the bowmen of Parthia or the Empire itself? Does the rider on the black horse represent famine or the artificial spiralling of the price of staples, while luxuries (wine and oil) are readily available? Obviously my word, Austerity, has contemporary significance but I don’t think it needs defending. These are the moving powers of the world as seen from the perspective of heaven; and as such they are active in every dimension of time, past,present and future; they are the determinants of life oriented towards death. There is no need to elaborate the contemporary relevance of this vision; as I write, the four horsemen canter over vast sweeps of the earth.

The opening of the fifth seal reveals those who have offered their lives in the cause of God’s goodness. That’s why their souls are under the altar of God. They have not been violent but are victims of the world powers and their horsemen. In a great phrase from Psalm 13 the true witnesses (Greek: martyr) express their impatient desire for God’s justice. They do not just say this with their lips but have said it with their lives, which have expressed passion for justice. They are given white robes as a sign that they have shared in the suffering of the Lamb and will also share his victory. 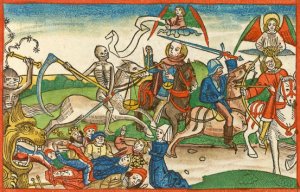 The cosmic earthquake that follows is a sign that a decisive turning point has been reached: the powers of the world (symbolised by their counterparts in the heavens- the planets, stars, and sky-) are deprived of power. What is the event which brings about this change? It is the offering made by the people of the fifth seal! It is their trust in the way of the Lamb, their offering of their lives for God’s justice, as the Lamb also offered his, which deprives the worldly powers of their rule. When the little people no longer fear death but stand up against evil, then the stars begin to fall. Understanding this immense contradiction is the key to understanding this strange book: the wrath of God and of the Lamb is the cross of Jesus effective in the crosses of those who trust in him. Theirs is the power that tumbles the great of the earth from their thrones and sends them to hide in caves. Having learned from the Christian tradition and from his own painful opposition to tyranny, Vaclav Havel, the Czech rebel and President, wrote about “speaking truth to power” and about the “power of the powerless.” He, like the writer of The Revelation, understood the great contradiction and made the great refusal.