The daily headlines are reminders of the world we live in:

The Seventh Seal and the Golden Censer

8 When the Lamb opened the seventh seal, there was silence in heaven for about half an hour. 2 And I saw the seven angels who stand before God, and seven trumpets were given to them.

3 Another angel with a golden censer came and stood at the altar; he was given a great quantity of incense to offer with the prayers of all the saints on the golden altar that is before the throne. 4 And the smoke of the incense, with the prayers of the saints, rose before God from the hand of the angel. 5 Then the angel took the censer and filled it with fire from the altar and threw it on the earth; and there were peals of thunder, rumblings, flashes of lightning, and an earthquake.

6 Now the seven angels who had the seven trumpets made ready to blow them.

8 The second angel blew his trumpet, and something like a great mountain, burning with fire, was thrown into the sea. 9 A third of the sea became blood, a third of the living creatures in the sea died, and a third of the ships were destroyed.

10 The third angel blew his trumpet, and a great star fell from heaven, blazing like a torch, and it fell on a third of the rivers and on the springs of water. 11 The name of the star is Wormwood. A third of the waters became wormwood, and many died from the water, because it was made bitter.

13 Then I looked, and I heard an eagle crying with a loud voice as it flew in mid-heaven, ‘Woe, woe, woe to the inhabitants of the earth, at the blasts of the other trumpets that the three angels are about to blow!’

Let’s recap: We have had two series of sevens: the letters to the seven churches and the opening of the seven seals. The first of these displays judgement and salvation in the life of the assemblies of Jesus. The second displays judgement and salvation amongst all humanity. We can note that the silence in heaven has the function A) of holding back the full content of the seventh seal at this point and B) incorporating the seven trumpets within the seventh seal. The sequences overlap, because they are different versions of the one process of God’s saving justice.

Between  the seals and the trumpets there is the interlude of the angel with the censer. The fire that burns on God’s altar represents the passionate offerings of God’s people, not of their prayers only but also of their lives, which ascend to God demanding justice. These may seem powerless but are depicted here as having the spiritual power of earthquakes. Worship offered by the whole person is the human partner of God’s saving justice.

The seven trumpets show this divine justice in relation to the cosmos. For this author the cosmos includes what we would call the natural universe, but it is more than that. It is also the order of powers that rule all living things. All the sequences of seven dramatise the struggle of God’s justice against the powers of evil represented by Babylon/ Rome. The disasters unleashed by the trumpets are adapted from the biblical plagues of Egypt, which were God’s warning to Pharaoh to let his people go free; these disasters are warnings to the oppressive power of Rome. It’s clear that they are no more than warnings because they touch only one third of the cosmos.

If, as I have emphasised,  heaven is the counterpart and ultimate future of the earth, we should probably interpret these natural disasters as an expansion of the thunders and earthquakes of verse 5 that is, as a physical expression of the spiritual power of faithful people, whose lives dispute the rule of Rome over the world, which is poisoning and disrupting God’s creation. 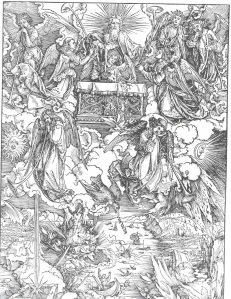 As we continue to read this strange book, we should be getting more adept at responding to its images and dramas. In a sense they all refer to the life of small assemblies of believers in Asia, but they present that life in its invisible and ultimate meaning, as an essential partner in God’s Rule of the cosmos.

I have to learn to see Jean Gibson of my parish, who works daily in a food bank although she is 81 years old, as one of the trumpets of God’s justice.