The daily headlines are reminders of the world we live in: 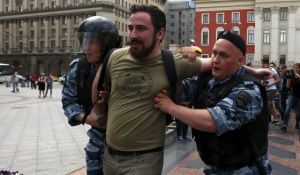 Enteo the leader of “Will of God”

9.1 And the fifth angel blew his trumpet, and I saw a star that had fallen from heaven to earth, and he was given the key to the shaft of the bottomless pit; 2 he opened the shaft of the bottomless pit, and from the shaft rose smoke like the smoke of a great furnace, and the sun and the air were darkened with the smoke from the shaft. 3 Then from the smoke came locusts on the earth, and they were given authority like the authority of scorpions of the earth. 4 They were told not to damage the grass of the earth or any green growth or any tree, but only those people who do not have the seal of God on their foreheads. 5 They were allowed to torture them for five months, but not to kill them, and their torture was like the torture of a scorpion when it stings someone. 6 And in those days people will seek death but will not find it; they will long to die, but death will flee from them.

7 In appearance the locusts were like horses equipped for battle. On their heads were what looked like crowns of gold; their faces were like human faces, 8 their hair like women’s hair, and their teeth like lions’ teeth; 9 they had scales like iron breastplates, and the noise of their wings was like the noise of many chariots with horses rushing into battle. 10 They have tails like scorpions, with stings, and in their tails is their power to harm people for five months. 11 They have as king over them the angel of the bottomless pit; his name in Hebrew is Abaddon,[a] and in Greek he is called Apollyon.[b]

12 The first woe has passed. There are still two woes to come.

13 Then the sixth angel blew his trumpet, and I heard a voice from the four[c] horns of the golden altar before God, 14 saying to the sixth angel who had the trumpet, ‘Release the four angels who are bound at the great river Euphrates.’ 15 So the four angels were released, who had been held ready for the hour, the day, the month, and the year, to kill a third of humankind. 16 The number of the troops of cavalry was two hundred million; I heard their number. 17 And this was how I saw the horses in my vision: the riders wore breastplates the colour of fire and of sapphire[d] and of sulphur; the heads of the horses were like lions’ heads, and fire and smoke and sulphur came out of their mouths. 18 By these three plagues a third of humankind was killed, by the fire and smoke and sulphur coming out of their mouths. 19 For the power of the horses is in their mouths and in their tails; their tails are like serpents, having heads; and with them they inflict harm. 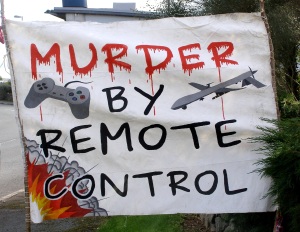 At last we get to some of the action for which Revelation is famed! The star falling from heaven is one of the evil powers that rules the earth, displaced by the authority of God but given the key to the bottomless pit, which is his own creation, the reality of his own evil.  The pit is the accumulated evil both in the human psyche and in human politics. Although they are represented as a punishment on evildoers, the poisonous locusts are the creation of those who have worshipped idols of greed, violence and empire, now turned back on their creators. Organised terrorism in all its destructive power for example, is but the lawless violence of the USA and its allies turned back upon its makers. Indeed there is already evidence the original Islamic Jihadis are now experiencing their own viciousness coming back upon them tenfold in the shape of ISIL.

The imagery of Revelation is potent still, showing how the evil we create is its own punishment in our souls as well as our societies. The description of the locusts makes them into nightmare parodies of empire (crowns) sex (faces and hair) and violence (teeth and breastplates). The names in Hebrew and Greek express the precise nature of this evil as the opposite of the Creator: here is the Destroyer, the Uncreating Power.

The second image in this chapter is the releasing of the four demonic beings and their unbelievably huge army of killers. This is a vision of the sheer power of violence once it has been released. Nothing can neutralise it or stand in its way. On the one hand the prophet may have been imagining the rebellious violence of all the nations conquered by Rome, and on the other, the remorseless warfare of the Empire itself. Those of us who have witnessed the appalling growth and sophistication of armaments over the last century, and the increasing number of human lives consumed by their use, can give meaning to the image of the huge army in this vision.

These destructive events are brought about by human beings who worship the powers of evil that eventually destroy them. But they are also punishments: they are the wrath of God and of the Lamb, who do not intervene by force to restrain such evils. They only intervene by the life and death of Jesus and of human beings who share his goodness. We must always interpret the cruel and demonic plagues that afflict humanity, then and now, as our own creation rather than the creation of God. 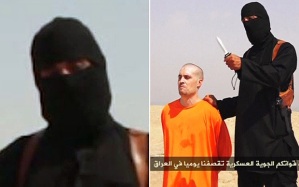 The actions of heaven, as I have stated, are the counterpart and ultimate future of earthly actions. The interpretation above is based on this principle. This is what human idolatry and evil are. Only unusual insight and imagination can glimpse their full horror. Have you noticed how our main newspapers never show us the actual aftermath of a bomb; their editors reckon we don’t want to see body parts as we drink our breakfast coffee, although such images are available online. We are fed a sanitised version of the evil done to us and by us. Revelation tears away the veil.