The daily headlines are reminders of the world we live

1 Then I was given a measuring rod like a staff, and I was told, ‘Come and measure the temple of God and the altar and those who worship there, 2 but do not measure the court outside the temple; leave that out, for it is given over to the nations, and they will trample over the holy city for forty-two months. 3 And I will grant my two witnesses authority to prophesy for one thousand two hundred and sixty days, wearing sackcloth.’

4 These are the two olive trees and the two lampstands that stand before the Lord of the earth. 5 And if anyone wants to harm them, fire pours from their mouth and consumes their foes; anyone who wants to harm them must be killed in this manner. 6 They have authority to shut the sky, so that no rain may fall during the days of their prophesying, and they have authority over the waters to turn them into blood, and to strike the earth with every kind of plague, as often as they desire.

7 When they have finished their testimony, the beast that comes up from the bottomless pit will make war on them and conquer them and kill them, 8 and their dead bodies will lie in the street of the great city that is prophetically[a] called Sodom and Egypt, where also their Lord was crucified. 9 For three and a half days members of the peoples and tribes and languages and nations will gaze at their dead bodies and refuse to let them be placed in a tomb; 10 and the inhabitants of the earth will gloat over them and celebrate and exchange presents, because these two prophets had been a torment to the inhabitants of the earth.

11 But after the three and a half days, the breath of life from God entered them, and they stood on their feet, and those who saw them were terrified. 12 Then they heard a loud voice from heaven saying to them, ‘Come up here!’ And they went up to heaven in a cloud while their enemies watched them. 13 At that moment there was a great earthquake, and a tenth of the city fell; seven thousand people were killed in the earthquake, and the rest were terrified and gave glory to the God of heaven.

14 The second woe has passed. The third woe is coming very soon. 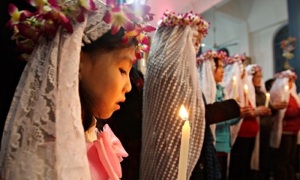 This passage like chapter 10 is an interlude between the sixth and the seventh trumpets, that is, between the partial unveiling of God’s creative mystery and the final unveiling. In this case also we have to see the vision as reflecting the life of the messianic assemblies in their capacity of speaking the truth in the face of the powers of the world which will be more specifically identified in the following chapters.

I don’t think the two prophets stand for any specific persons, but for the assemblies in general, for they are called ‘lampstands’ as the assemblies have been. The fact that there are two may stand for the multinational nature of the assemblies as Jewish and Gentile or for the past dual function of the assemblies to be both priests and kings. (the passage in Zechariah chapter 4 on which this is based, is so obscure that we should concentrate on what this author is doing with the imagery). Their depiction as olive trees may signify their fruitful faith which provides the fuel for their witness to Jesus, their lamps.

The killing of the prophets by the beast anticipates the content of later visions, while their unburied bodies lying in the streets of the world city for three and a half days is an image of the “messianic distress”, the time of the suffering of God’s people, which began with the crucifixion of Jesus. This vision simply reinforces the message of the author, that true allegiance to God and the Lamb will entail suffering (the “three and a half” is a old prophetic image of the time until God’s justice will prevail).

The prophetic ministry of the assemblies is clearly depicted as powerful and disturbing to the citizens of the evil city, who celebrate their deaths. God is imagined as raising them miraculously to heaven, and the force of their resurrection destroys part of the city and its people. Heaven is the counterpart and final future of earth where all that can be seen is the faithful suffering of the witnesses. In the language of the vision the courage of the witnesses is the earthquake that shakes the city. The messianic assemblies are assured that their faithfulness will be effective and their own lives restored in God’s Rule.

This interpretation allows us to see the measuring of the inner temple as an Image of God’s preservation of the messianic assemblies even as their members are persecuted and killed by the adherents of the beast. It may also point to God’s care of the inner person, even although the outer person is destroyed.

Again in this passage there are references to Ezekiel, Zechariah, Kings, Exodus, which were common currency in Jewish “apocalyptic” writings. Often the meaning of these references is not clear, either because the keys to understanding have been lost, or because the author’s Intention was simply to identify the heroes of God’s new people with the heroes of Israel.

I am sure that people of faith should not look for suffering, but it may be reasonable for comfortable churches to ask why none of the world’s powers feels the need to persecute them.