15 Then the seventh angel blew his trumpet, and there were loud voices in heaven, saying,

‘The kingdom of the world has become the kingdom of our Lord
and of his Messiah,
and he will reign for ever and ever.’
16 Then the twenty-four elders who sit on their thrones before God fell on their faces and worshipped God, 17 singing,

‘We give you thanks, Lord God Almighty,
who are and who were,
for you have taken your great power
and begun to reign.
18 The nations raged,
but your wrath has come,
and the time for judging the dead,
for rewarding your servants,[e] the prophets
and saints and all who fear your name,
both small and great,
and for destroying those who destroy the earth.’
19 Then God’s temple in heaven was opened, and the ark of his covenant was seen within his temple; and there were flashes of lightning, rumblings, peals of thunder, an earthquake, and heavy hail.

The blowing of the seventh trust announces the final revelation, which will be the content of the remaining chapters of the book. I have stated that my principle of interpretation is that heaven is the counterpart of earth and its ultimate future.  One of the sub-principles therefore is that nothing happens in heaven without an earthly counterpart. Heaven is not utterly divorced from Earth, but rather a full expression of Earth; heavenly events confirm, expound and express the full meaning of earthly events.

God’s victory, then, does not only occur in heaven, but also on earth in the faithfulness of Jesus and his followers to God’s saving justice. God’s victory over the kingdoms of the world is the refusal of his Messiah and those who trust in him to bow to gods of empire. At the time of John’s vision, the full expression of this victory lies in heaven and in the future, but the decisive blow has already been struck by the Messiah and his people.

The same is true of the judgement and destruction of earthly powers. They have judged themselves by warring against the Messiah and his people, and they have already committed themselves to destruction, that is to the “anti-creation” which will ultimately swallow them also. God’s judgement simply confirms the judgement they have made upon themselves: they belong to death and not to life. 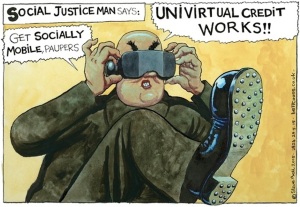 The reader can be easily deceived by the earthquakes, thunders and lightnings, that God’s actions are simply judgements from on high, a brutal unleashing of his almighty power. i am not claiming that God does not punish -for justice involves punishment as well as reward- but that neither the rewards nor the punishment are unrelated to the self- determination of human beings, who all get what they have chosen: those who have chosen life get life and those who have chosen death get death. All are offered life by the creator God but they are not compelled to receive it.

I have been well acquainted in my various ministries in Scotland and England with the many even in a rich society who have barely been given the chance to live with dignity, and who have often been trampled by the foot of power; those who are even now, under the present UK government, subjected to lies, disinformation, bullying and deprivations, so that the rich and powerful may become richer and more powerful. Many of these victims show courage in the face of repeated defeats, and even in their despair a humanity which is not possessed by their smartly dressed tormentors.

The book of Revelation says that the sufferers share in the suffering and victory of the Lamb and that their mockers will be mocked, their tormentors will be tormented, their destroyers will be destroyed. There is no sentimentality in this book over the fate of the wicked. Its slightly grim joy is well understood in the story of the old Scottish preacher, who told his flock,

” And when the wicked in the lake of fire look up and see the saints in the holy city drinking from the fountain of life, they will cry in bitter anguish, ‘ Lord, Lord, we didna ken'( didn’t know) And then the Lord in his infinite mercy will look down and answer them, ‘ Weel, ye ken noo’ ( you know now)

For myself I prefer to think that the punishment of the wicked is intended by God to be redemptive and therefore find myself, strangely for a Presbyterian, veering towards some notion of Purgatory; but I think that there are hearts hard enough to choose extinction rather than any admission of wrong. Of them the terrible saying of St Irenaeus may be true, “God will leave them in the darkness they have chosen.”

I’m sure many readers will conclude that these convictions are metaphorical and not to be taken seriously. Of course they are metaphorical but I take them very seriously, as I imagine the dividing line of judgement to fall not only between good and evil people, but between the good and evil in myself, so that everything destructive in me can, if I am willing, be destroyed, and  the creative me, however small, may live.