13 1 And I saw a beast rising out of the sea, having ten horns and seven heads; and on its horns were ten diadems, and on its heads were blasphemous names. 2 And the beast that I saw was like a leopard, its feet were like a bear’s, and its mouth was like a lion’s mouth. And the dragon gave it his power and his throne and great authority. 3 One of its heads seemed to have received a death-blow, but its mortal wound[a] had been healed. In amazement the whole earth followed the beast. 4 They worshipped the dragon, for he had given his authority to the beast, and they worshipped the beast, saying, ‘Who is like the beast, and who can fight against it?’

5 The beast was given a mouth uttering haughty and blasphemous words, and it was allowed to exercise authority for forty-two months. 6 It opened its mouth to utter blasphemies against God, blaspheming his name and his dwelling, that is, those who dwell in heaven. 7 Also, it was allowed to make war on the saints and to conquer them. It was given authority over every tribe and people and language and nation, 8 and all the inhabitants of the earth will worship it, everyone whose name has not been written from the foundation of the world in the book of life of the Lamb that was slaughtered.

9 Let anyone who has an ear listen:

10 If you are to be taken captive,
into captivity you go;
if you kill with the sword,
with the sword you must be killed.
Here is a call for the endurance and faith of the saints.

11 Then I saw another beast that rose out of the earth; it had two horns like a lamb and it spoke like a dragon. 12 It exercises all the authority of the first beast on its behalf, and it makes the earth and its inhabitants worship the first beast, whose mortal wound[d] had been healed. 13 It performs great signs, even making fire come down from heaven to earth in the sight of all; 14 and by the signs that it is allowed to perform on behalf of the beast, it deceives the inhabitants of earth, telling them to make an image for the beast that had been wounded by the sword and yet lived; 15 and it was allowed to give breath[f] to the image of the beast, so that the image of the beast could even speak and cause those who would not worship the image of the beast to be killed. 16 Also it causes all, both small and great, both rich and poor, both free and slave, to be marked on the right hand or the forehead, 17 so that no one can buy or sell who does not have the mark, that is, the name of the beast or the number of its name. 18 This calls for wisdom: let anyone with understanding calculate the number of the beast, for it is the number of a person. Its number is six hundred and sixty-six. 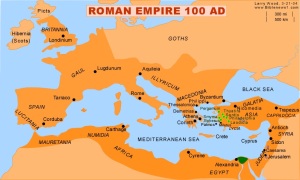 It doesn’t take great intelligence to see that these beasts are both versions of First century Rome and its Empire, and are therefore not prophecies of some future event. They are dangerously critical representations of the most powerful worldly powers known to the author and his people. All those who have fiddled with the images and numbers to prove they identify Hitler, Stalin, Pol Pot, Al Qaeda or even Barak Obama, as the great beast, have been wasting their time. Here we have images of the Roman Empire in its demonic power; but they are so well constructed that they may help the readers to recognise the demonic aspects of worldly powers in their own time and place.

We should look at the narrative more closely.

The first beat rises from the sea, that is, out of chaos, drawn by the power of the red dragon, who has been thrown out of heaven for opposing God. The author is saying that Rome itself has come to power as a worldly attempt to rival the power of God. It is intrinsically blasphemous. The ten horns are later explained as ten kings from East who are allies of Nero, and the seven heads are both the seven hills of Rome and its seven emperors. The description is taken from Daniel chapter where it is intended to represent the Empire of Alexander. The author would have expected prophetic images to be applicable to different opponents of God.

The power of the empire is in its size and ruthlessness – who can oppose the Beast? People recognise and submit to its demonic power, which is only opposed by those who belong to the Lamb. Only members of the messianic assemblies of Jesus had refused to recognise the divine status of the emperors. The Empire is allowed power for what we can again recognise as the time of God’s patience, the three and a half times of the Book of Daniel, seen here as three and half years, or forty two months. This language simply means that there will be an end to its power in God’s good time. God’s saints are called to suffering and endurance.

The beast from the earth is not wholly distinct from the first but is presented as its advocate or cheer leader. The author is creating an image of the religious cult of Rome, whereby every town would have an image of Roma as a goddess bringing benefits to the world, flanked by images of emperors and the imperial family. Towns and cities within the Empire vied with each other in erecting such shrines and promoting their use by citizens. This cult was a powerful, world-wide way of promoting the power of Rome and benefitting from it. Here was a new world, controlled by the intelligent rule of Rome, which built roads, cleared the sea of pirates, introduced new technologies, encouraged literacy, established law and enforced order. What was not to like? Why should one balk at expressing one’s reverence for such a power? The cult did not have to be imposed by force. When most civic leaders in most parts of the empire asked what Rime had done for them, they came up with plenty of answers. The author acknowledges the ideological power of the imperial cult  in the figure of the second beast. 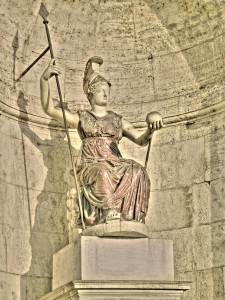 The wounded head of the first beast stands for Nero who has committed suicide but was widely believed to be alive and able to return. We can see that the wounded beast and the worship offered to it by the second beast are an evil parody of the Lamb on the throne worshipped by the heavenly court. Although the phrase anti-Christ/ messiah is not used, it is clear that the author sees the Empire and its worshippers in this role. It is in his eyes also a commercial entity. He is quite modern in seeing the importance of economic power. Only those permitted by the Imperial authorities could successfully trade within the empire. That is why, although in fact only slaves were branded, the author imagines all who do business in the Empire as bearing a brand on their arm or forehead. All the Empire’s willing supporters are in his view, slaves. The Lamb’s people are also marked, but in their case, with a seal, which is the assurance that they belong to God here and hereafter.

Too many have spent too much time working on the number of the beast, which must be solved using Greek or Hebrew alphabets in which the letters are  also numerals. I think that the best guess is that it stands for Nero.

Modern readers can learn from this passionate exposure of a world power how the world powers which seem so godlike to their supporters may be seen as demonic by people who have another allegiance. Most great powers will have delusions of grandeur and will rely on the propaganda of their supportive media. See how the Murdoch press praises right-wing rule in the UK, the Orthodox Church in Russia bows to Putin, and conservative evangelical groups in the U.S. back the unrestrained expression of American power. Such people are derided in this passage as the beast from the earth.

Our estimate of the value of this kind of vision will depend on how we rate the convictions on which it is founded. In this case, the messianic assemblies of peaceful people following Jesus had found themselves assailed by imperial officials who saw them as a foreign cult that had no respect for the Empire and its Gods. They were in no way revolutionary, they has no desire to impose on others, but looked for freedom to share their story of Jesus publicly and to meet in his honour. Many of them were slaves, without power or rights and yet they found themselves suspected, harassed and ultimately persecuted by the might of the empire. They were pushed by these experiences into seeing the great Empire from the perspective of the slaughtered Lamb.