18 After this I saw another angel coming down from heaven, having great authority; and the earth was made bright with his splendour. 2 He called out with a mighty voice,

‘Come out of her, my people,
so that you do not take part in her sins,
and so that you do not share in her plagues;
5 for her sins are heaped high as heaven,
and God has remembered her iniquities.
6 Render to her as she herself has rendered,
and repay her double for her deeds;
mix a double draught for her in the cup she mixed.
7 As she glorified herself and lived luxuriously,
so give her a like measure of torment and grief.
Since in her heart she says,
“I rule as a queen;
I am no widow,
and I will never see grief”,
8 therefore her plagues will come in a single day—
pestilence and mourning and famine—
and she will be burned with fire;
for mighty is the Lord God who judges her.’
9 And the kings of the earth, who committed fornication and lived in luxury with her, will weep and wail over her when they see the smoke of her burning; 10 they will stand far off, in fear of her torment, and say,

‘Alas, alas, the great city,
Babylon, the mighty city!
For in one hour your judgement has come.’
11 And the merchants of the earth weep and mourn for her, since no one buys their cargo any more, 12 cargo of gold, silver, jewels and pearls, fine linen, purple, silk and scarlet, all kinds of scented wood, all articles of ivory, all articles of costly wood, bronze, iron, and marble, 13 cinnamon, spice, incense, myrrh, frankincense, wine, olive oil, choice flour and wheat, cattle and sheep, horses and chariots, slaves—and human lives.

14 ‘The fruit for which your soul longed
has gone from you,
and all your dainties and your splendour
are lost to you,
never to be found again!’
15 The merchants of these wares, who gained wealth from her, will stand far off, in fear of her torment, weeping and mourning aloud,

16 ‘Alas, alas, the great city,
clothed in fine linen,
in purple and scarlet,
adorned with gold,
with jewels, and with pearls!
17 For in one hour all this wealth has been laid waste!’
And all shipmasters and seafarers, sailors and all whose trade is on the sea, stood far off 18 and cried out as they saw the smoke of her burning,

‘What city was like the great city?’
19 And they threw dust on their heads, as they wept and mourned, crying out,

‘Alas, alas, the great city,
where all who had ships at sea
grew rich by her wealth!
For in one hour she has been laid waste.’
20 Rejoice over her, O heaven, you saints and apostles and prophets! For God has given judgement for you against her.

21 Then a mighty angel took up a stone like a great millstone and threw it into the sea, saying, 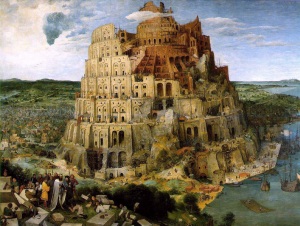 The Tower of Babel – a model for this passage

This great passage is a mixture of two kinds of traditional prophetic song, the taunt song and the lament. One might expect John the prophet to taunt Rome with the prospect of its defeat, but so great has been the city’s influence that he also voices the shock of its allies who have tied their fortunes to it.  At the same time the prophet provides his fullest characterisation of the city which dominates the world in which he lives.

No time is wasted on the process of the city’s downfall; we are placed in the immediate aftermath of its downfall listening to the taunts of those it has oppressed and the laments of those who have benefitted from its rule.

Heavenly voices proclaim its fall, one summing up its crimes: seducing nations and their kings into worshipping her as a God ( ” fornication”), and creating huge luxury for its great merchants and traders. Another instructs God’s people to come out of her, as from Sodom and Gomorrah in the past, separating themselves from the city just as the city had separated herself from them. They are to feel no sympathy with her as she the evil she suffers is the consequence of her own deeds. She drinks from her own poisoned chalice.

The rulers and politician of the Empire lament because Rome’s downfall will also be theirs. The merchants of the empire of have grown rich on the backs of oppressed peoples, lament the loss of their trade. The wonderfully detailed description of the commodities of Roman trade reaches a climax in the words, “slaves and human lives.” Their laments  along with that of the seafarers who carried the merchandise do not move the reader as much as the more ordinary signs of her life, the music, the noise of skilled workers, the lamp in the house at night, the voices of lovers, these small good things are also gone; along with the great evil thing, the blood of human beings, including God’s prophets and saints.

A splendid account of Rome’s glittering power is undercut by the simplicity of the judgment upon her: she has treated human lives as commodities to be bought and sold, and has shed innocent blood.

(There was just a whiff of that arrogance is the announcement yesterday by the British PM of the 20,000 lives he intends to rescue along with 3 lives he chose to snuff out with a drone. Certainly any commitment to  helping refugees is to be welcomed and we may feel that the deaths of 3 jihadists are not to be mourned, but there was something in Mr Cameron’s sense of power over human lives that ought to make us think.)

The chapter as a whole sees clearly the interconnections of power, wealth, trade, and ideology in the rule of Rome. It is able by its use of the resources of vast territories, to create pockets of luxury, provide work for many, bring about miracles of technology, while promoting its own image, Roma, as a divine benefactress. We should be able to see in this passage the marks of the modern empire of liberal capitalism, with all its civilising achievement and all its toxic effects. ( there was a goth band in Aberdeen back in the ’80s called “Toxic FX” that pointed out this kind of thing. Hello, if you’re out there!)

More than any other similarity, we should note the arrogance of this capitalist empire, its conviction that

freedom and democracy on its terms are for the good of all humanity and can be imposed by force. Although it may not set up literal shrines to itself, its ideology promotes its image and invites worship  from all nations.

But what about all the poor oppressed people whose greatest wish is to become part of countries where liberal capitalism rules? Yes, it’s true that there are many countries where the rule of law has mitigated the effects of the system with checks on its power. We must applaud and support all who provide these checks, while at the same time asking whether the system itself is not out of control and geared to destruction. If we can see in our societies the marks of Babylon: an idolatrous worship of its itself, a turning of human lives into commodities, and a willingness to shed innocent blood, then we should learn, as the members of John’s Messianic Assemblies had to learn, how to make the great refusal; denying its legitimacy and working quietly for God’s Way in the world.

Tags: The fall of Babylon