22 Then the angel showed me the river of the water of life, bright as crystal, flowing from the throne of God and of the Lamb 2 through the middle of the street of the city. On either side of the river is the tree of life with its twelve kinds of fruit, producing its fruit each month; and the leaves of the tree are for the healing of the nations. 3 Nothing accursed will be found there any more. But the throne of God and of the Lamb will be in it, and his servants will worship him; 4 they will see his face, and his name will be on their foreheads. 5 And there will be no more night; they need no candle neither light of the sun, for the Lord God will be their light, and they will reign for ever and ever.

6 And he said to me, ‘These words are trustworthy and true, for the Lord, the God of the spirits of the prophets, has sent his angel to show his servant what must soon take place.’

7 ‘See, I am coming soon! Blessed is the one who keeps the words of the prophecy of this book.’

8 I, John, am the one who heard and saw these things. And when I heard and saw them, I fell down to worship at the feet of the angel who showed them to me; 9 but he said to me, ‘You must not do that! I am a fellow-servant[e] with you and your comrades the prophets, and with those who keep the words of this book. Worship God!’

10 And he said to me, ‘Do not seal up the words of the prophecy of this book, for the time is near. 11 Let the evildoer still do evil, and the filthy still be filthy, and the righteous still do right, and the holy still be holy.’

12 ‘See, I am coming soon; my reward is with me, to repay according to everyone’s work. 13 I am the Alpha and the Omega, the first and the last, the beginning and the end.’

14 Blessed are those who wash their robes, so that they will have the right to the tree of life and may enter the city by the gates. 15 Outside are the dogs and sorcerers and fornicators and murderers and idolaters, and everyone who loves and practises falsehood.

16 ‘It is I, Jesus, who sent my angel to you with this testimony for the churches. I am the root and the descendant of David, the bright morning star.’

17 The Spirit and the bride say, ‘Come.’
And let everyone who hears say, ‘Come.’
And let everyone who is thirsty come.
Let anyone who wishes take the water of life as a gift.
18 I warn everyone who hears the words of the prophecy of this book: if anyone adds to them, God will add to that person the plagues described in this book; 19 if anyone takes away from the words of the book of this prophecy, God will take away that person’s share in the tree of life and in the holy city, which are described in this book.

20 The one who testifies to these things says, ‘Surely I am coming soon.’ 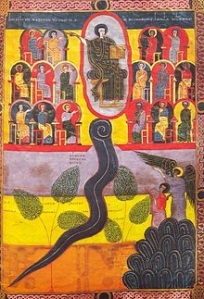 21 The grace of the Lord Jesus be with all the saints. Amen.

To most readers this final chapter looks like a mixture of the sublime and the ridiculous – a vision of the source of life followed by a collection of loopy grumblings, curses and daft prayers. There may be some suspicion that various hands have added this and that to the last section.

The concluding vision is genuinely powerful. The imagery of the river is borrowed from Ezekiel, but it is altered beautifully for this purpose. The river of life flows from God’s throne, that is, it is an expression of God’ s creative rule of the universe, through the Lamb. Are there many trees of life or two or even just one? It’s not clear but its 12 seasonal fruits match the 12 tribes of Israel and the 12 disciples of Jesus, who stand  for the worshippers of the true God, bearing the fruit of goodness. The leaves of the tree of life are medicinal: they heal the illnesses of the gentile nations. They stand for the goodness which all nations have sought but not found in the great world empire of Rome.

Verses 3 -5 are simple and beautiful. Literally verse 3 says, “there shall be no curse there,” meaning that the ancient restrictions God has placed on human life are no more. God’s name shall be upon their foreheads means not only that they belong to him but also reflects a Jewish legend that the image and name of God are upon every human head for those who can see it. It is told of the Baal Shem Tov and his disciples that they once  summoned Sammael, Prince of Demons for some right purpose and that he exploded amongst them in wrath at having been disturbed. But when their business was over, he said, “Sons of the living God let me tarry awhile and gaze upon your foreheads!” The name upon the forehead is not a form of branding but the signature of the divine artist.

The last gift is also the first; the one who said “Let there be light” now becomes light for his restored creation. Night, which God had kept as an element of chaos within his ordered creation, is no longer needed. I”ve intruded the KJV translation “candle” because it so perfectly gives the contrast between the homes of ordinary people at night and the glory of God’s rule which they share.

The book of visions ends with the affirmation of their prophetic truth and the voice of Jesus promising his return. The complete image of the Holy City is opposed to that of Babylon/ Rome, the evil city which holds the world in thrall, and also to the world empire of advanced capitalism in our day, of which Wendell Berry has said, ” to the offer of Life Abundant, we have responded with the economics of extinction.”

My best guess is that the rest of the chapter from verse 8 to the end is the work of various editors, reflecting the fervent trust of these church assemblies in the truth of the visions and the return of Jesus. They are of real interest for the history of the early church, but not I think for the interpretation of the book of The Revelation. I make this judgment because they are incoherent whereas the visions of John are carefully structured. I’ll leave them therefore and will return in my next blog to sum up the theology of this extraordinary and valuable book.

Tags: the river and the tree of life