MH 17 WAS HIT BY BUK MISSILE MADE IN RUSSIA 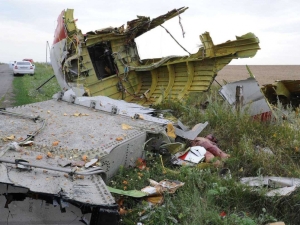 PSALM 15 A Psalm of David

WHO will find lodging in your tent?

WHO will settle on your holy mountain?

and speaks the truth in his heart.

THE ONE WHO DOES NOT

Use his tongue for slander

Do wrong to his friend

Or bring scorn on his neighbour

And keeps a vow even to his own cost

THE ONE WHO DOES NOT

Or take a bribe to damage the innocent

THE ONE WHO lives this way

will never be shaken.

This is a carefully patterned Psalm which may have been used a pilgrims approached the temple. It is very similar to Psalm 24 vv 3-4. I have given up the best flow of words in order to reveal the structure. The opening asks the question “Who?” and is answered successively by a)  three positives b) three negatives c) two positives d) two negatives e) one positive summing up. The positives use participial verbs in Hebrew while the negatives use what we would call indicatives. This structure may have assisted memorising and the clarity of the phrases when chanted by a group.

Behind this psalm is familiarity with the Torah, with summaries of the Law like the Ten Commandments (Exodus 20) and the Holiness Code (Leviticus 19) in which the holiness of God requires certain precise forms of holiness from his people. The psalm asks what sort of person is worthy to stand in the temple, the “house of God”, and it gives plain answers. They are all interesting: 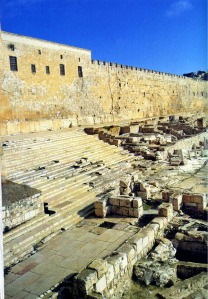 the temple stairs from time of Jesus

To walk with integrity means as the modern cliché has it, not just to talk the talk but to walk the walk. To do justice means to treat everyone fairly and to stand up for those who are not so treated. To speak truth in the heart means to order one’s life by the facts. (I have translated “in” the heart which I think is the meaning rather than “from” the heart which is more banal but favoured by some modern translators) These are not simply routine virtues and deserve thoughtful consideration.

If the positives are uncommon virtues, these are all too common vices. Even decent people find it hard to control their tongues, which readily express the ugliness lurking within. Friends and companions are often the target of our bad behaviour,  while competition often leads us to disparage our neighbours in work, leisure or residence. These may seem so common as to be trivial. The psalm says no, they deprive a person of God’s presence.

Despising the vile people and honouring the good people is a challenging virtue for a society where celebrity outweighs any such consideration. The vilest are often “honoured” by the media, while the good are often mocked or ignored. A society which forgets to discriminate between worthy and unworthy puts its communal life at risk. We may contrast the attitude of the psalm with that of Jesus who reached out to those who were despised as vile. Jesus was however not denying the vileness of say, those who collected taxes for the occupying Romans; he was offering a way out of vileness and a new beginning by means of an “advance” of honour. Keeping a vow even when it turns out to be costly  is an example of what it means to fear God. We might be able to weasel out of it by some semi-legal means, but that will not convince God who has heard the vow in the first place. To be people of our word, maintaining the consonance of word and action, is a requirement of the God who is forever faithful to his promises.

These are both connected with money and the love of it. Cash transactions were relatively new in ancient Israel but as the practice developed it freed commerce from the old ties of communal life with its quid pro quo forms of credit. The Torah is adamant that God’s people must not use their relative good fortune to lend money at interest, making wealth out of their neighbour’s need. Given that our whole economic system is based on lending at interest, this prohibition ought to make us think. Another despicable form of greed is that of the person in authority (in a village or urban court), taking bribes that disadvantage the innocent party in a dispute. Any way in which courts of justice are manipulated by wealthy people is utterly foreign to the judge of all the earth who is just.

The summing up is a reminder that none of this is a theory; it is a command; it has to be lived.

Tags: psalm 15, Who will find lodging in the tent of the Lord