I have recently completed a reading of The Revelation and have begun a new series which will look at the Psalms, or at least the first book of them, that is Psalms 1-41. I am even less of an expert in Hebrew than I am in Greek, but I will study the Hebrew and usually give the reader my own translation of the Psalm for the day. The Psalms collected in the Hebrew bible were written over a period of perhaps 800 years, and are difficult to date. Probably none of them were written by King David and their true authors are unknown. They were used in the worship of the second temple in Jerusalem and have been used in most traditions of Christian worship, including that of the Church of Scotland, in which they were versified into such international favourites as “The Lord’s my shepherd” and “All people that on earth do dwell”. They are poetic songs and should be appreciated as such. They are also not free of prejudice, (they hardly mention women) and inappropriate emotions (they ask God to smash the faces of enemies). In other words, they speak my sinful language

(For the music leader. A psalm by David, the Lord’s servant. David sang this to the Lord after the Lord had rescued him from his enemies, but especially from Saul) 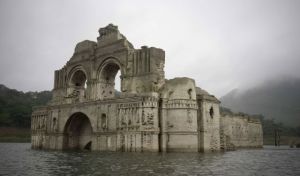 and you make me strong.
2 You are my mighty crag,
my fortress, my protector,
the rock where I am safe,
my shield,
my powerful weapon,
and my place of shelter.

3 I praise you, Lord!
I prayed, and you rescued me
from my enemies.
4 Death had lashed
its ropes around me,
and I was almost swallowed
by its flooding waters.

5 Ropes from the world
of the dead
had twisted around me,
and death had set a trap
in my path.
6 I was hemmed in
when I called out to you,
but from your temple
you heard me
and answered my prayer.

7 The earth shook and shivered,
and the mountains trembled
down to their roots.
You were angry
8     and breathed out smoke.
Scorching heat and fiery flames
spewed from your mouth.

9 You opened the heavens
like curtains,
and you came down
with storm clouds
under your feet.
10 You rode on the backs
of flying beasts
and swooped down
on the wings of the wind.
11 Darkness was your robe;
thunderclouds filled the sky,
hiding you from sight.
12 Hailstones and fiery coals
lit up the sky
in front of you.

13 Lord Most High, your voice
thundered from the heavens,
as hailstones and fiery coals
poured down like rain.
14 You scattered your enemies
with arrows of lightning.
15 You roared at the sea,
and its deepest channels
could be seen.
You snorted,
and the earth shook
to its foundations.

16 You reached down from heaven,
and you grabbed me
from deep in the ocean.
17 You rescued me from enemies,
who were hateful
and too powerful for me.
18 On the day disaster struck,
they came and attacked,
but you defended me.
19 When I was taken by surprise,
you freed and rescued me
because you love me.

20 You are good to me, Lord,
because I do right,
and you reward me
because I am innocent.
21 I walk in your paths
and never turn to do evil.
22 I keep your laws in mind
and never look away
from your teachings.
23 I obey you completely
and guard against sin.
24 You have been good to me
because I do justice;
you have rewarded me
for being blameless
in your eyes.

25 You are always loyal
to your loyal people,
and you are faithful
to the faithful.
26 With all who are sincere,
you are sincere,
but to the treacherous
you will be deceptive.
27 You rescue the humble,
but you put down all
who are proud.

28 You, the Lord God,
keep my lamp burning
and turn darkness to light.
29 You help me defeat armies
and capture cities.

30 Your way is perfect, Lord,
and your word is correct.
You are a shield for those
who run to you for help.
31 You alone are God!
Only you are a mighty crag.
32 You give me strength
and guide me right.
33 You make my feet run as fast
as those of a deer,
and you help me stand
on the mountains.

34 You train my hands for combat 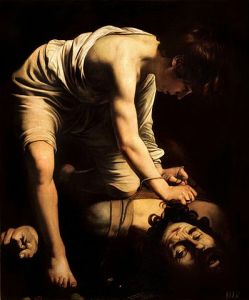 and my arms to bend
a bow of bronze.
35 You alone are my shield.
Your right hand supports me,
and by coming to help me,
you have made me great.
36 You clear the way for me,
and now I will not stumble.

37 I kept chasing my enemies,
until I caught them
and destroyed them.
38 I stuck my sword
through my enemies,
and they were crushed
under my feet.
39 You helped me win victories,
and you forced my attackers
to fall victim to me.

40 You made my enemies run,
and I killed them.
41 They cried out for help,
but no one saved them;
they called out to you,
but there was no answer.
42 I ground them to dust
blown by the wind,
and I poured them out
like dirt in the streets.

43 You rescued me
from stubborn people,
and you made me the leader
of foreign nations,
who are now my slaves.
44 They obey and come crawling.
45     They have lost all courage,
and from their fortresses,
they come trembling.

46 You are the living Lord!
I will praise you.
You are a mighty crag.
I will honor you
for keeping me safe.
47 You took revenge for me,
and you put nations
in my power.
48 You protected me
from violent enemies
and made me much greater
than all of them.

49 I will praise you, Lord,
and I will honor you
among the nations.
50 You give glorious victories
to your chosen king.
Your faithful love for David
and for his descendants
will never end.

This is one of the longest psalms which explains why I have chosen to use a ready-made translation rather than working through its 50 verses myself. It is said to be one of the oldest psalms, and is to be found also with some variations at 2 Samuel 22, which is probably the original form. Scholars say that if we are looking for a psalm that might have been composed by David, this is a good candidate.

It also depicts the sort of God many of us would like. The psalmist / warrior has kept the Lord’s commands and therefore the Lord is faithful to him. He grabs him unceremoniously from the danger of death; he confronts the forces of chaos with all the majesty of his creative power. Riding a winged beast he swoops from heaven, burning and incinerating, snorting and breathing fire to rescue his faithful warrior, to whom he grants a comprehensive victory over his presumptuous enemies, forcing them on to their knees in humiliating surrender.

God’s warrior is not a man of compassion, but rather makes the most of God’s help, smashing his enemies into the ground, dispensing with them like rubbish chucked into the street.

Behind all this fury, there is also the picture of a man sorely pressed, cornered by his foes, whom God lifts out into a broad place of safety; and a picture of a God who deals back to people the treatment they have dealt to others, “measure for measure” as Jesus taught. It is a passionate poem, which expresses love for God in an unusual word at the outset. “I love you, Lord God” which uses the verb “racham” meaning a mother’s love for her baby. This is the only place in the scripture where it is used of human love for God, rather than vice versa. It may come from the David tradition which preserves a sense of David’s passionate intimacy with God.

So here we have the love of a warrior king for God, which is reciprocated in God’s fierce protection of his beloved human being. What’s not to like?

Well, just the fact that life ain’t like that. So many who love God and fight for his justice in the world are not saved from their enemies but rather given into their hands; so many like David Haines, victim of ISIL, butchered to advertise the power of thugs. He was a modest, just and faithful man but God appears to have deserted him in his time of trouble, as He appears to have deserted Jesus. The psalm however says that we have to use relevant weapons: evildoers will not be dissuaded by sermons and passive resistance. God will help those who are ready to help themselves, who have not only the courage but also the means to oppose the enemy, who can fight alongside the creator God against the forces of chaos. Certainly God has the main part to play, but the warrior of the psalm has to be fit for his part. The message is that we are not to accept the power of evildoers as the will of God, but to rebel against it, using the weapons we have. Then, God can help us.

I do not agree with this message, because I try to follow the teaching of Jesus which is opposed to all violence. But I do agree with  the bit of it that says evil must be opposed courageously and that God will be with those who do so. Gandhi said that if people were not ready for non-violent conflict against evil, they should fight it violently rather than giving in to it. The God depicted here with such vigour can perhaps be imagined as participating in the non- violent struggle led by Martin Luther King for equality. The one who scatters enemies and shakes the earth with his snorting was surely present there, and will be present with us when we struggle for what is right and good.