26 In the sixth month, the angel Gavri’el was sent by God to a city in the Galil

called Natzeret, 27 to a virgin engaged to a man named Yosef, of the house of David; the virgin’s name was Miryam. 28 Approaching her, the angel said, “Shalom, favored lady! The Lord is with you!” 29 She was deeply troubled by his words and wondered what kind of greeting this might be. 30 The angel said to her, “Don’t be afraid, Miryam, for you have found favor with God. 31 Look! You will become pregnant, you will give birth to a son, and you are to name him Yeshua. 32 He will be great, he will be called Son of the Most High. The Lord God will give him the throne of his forefather David; 33 and he will rule the House of Ya‘akov forever — there will be no end to his Kingdom.” 34 “How can this be,” asked Miryam of the angel, “since I am a virgin?” 35 The angel answered her,

“The Holy Spirit will come over you,
the power of the Most High will cover you.
Therefore the holy child born to you
will be called the Son of God.

36 “You have a relative, Elisheva, who is an old woman; and everyone says she is barren. But she has conceived a son and is six months pregnant! 37 For with God, nothing is impossible.” 38 Miryam said, “I am the servant of The Lord; may it happen to me as you have said.” Then the angel left her.

In my reading of the first chapters of Luke’s Gospel, I have used the Complete Jewish Bible because it faithfully reproduces their language, which Luke has modelled on the Greek translation of the Hebrew Bible, a style that links the story of the Messiah’s birth to the story of Israel and her God.

In the preceding Bible Blog, I commented on Luke’s introduction and his story of the birth of John the Baptist. In this passage Luke focuses on Miryam, a young kinswoman of Elisheva, who is betrothed to a man called Yosef. It is emphasised that she is a virgin, which can mean simply a young woman, or one who has not had sex. Luke plays a little with this word, “parthenos” in Greek, because he knows it has been used in the Greek translation of Isaiah 7:14 “Behold, the parthenos is with child.” There is no real doubt that Isaiah was referring to royal, married princess, but the Greek translation allows the possibility of another meaning, which we call the virgin conception or birth, but which is in Luke’s story, as we will see, a good deal subtler than that.

Of course, we are also faced with Gavriel the angel whom we have already met in the previous episode. Someone asked after reading my definition, “Luke’s angels are symbols of the creativity of faith and of God,” if I think angels are “real”? Well of course they are real characters in this story! The story Luke wants to tell cannot be told without them. But I know some will think that answer a cop-out. So I can add that a creative partnership between human beings and the One they call God is real, and that the human awakening to that partnership is the moment of the angel. We have no other words for this moment, so why should we not call it an angel, as long as we don’t get carried off into the utterly tedious and manipulative realm of angelology.

The scene between Miryam and Gavriel is very delicately scripted, offering the reader a glimpse of the grave courtesy of the heavens, as well as the slightly sceptical modesty of an unmarried teenager who wonders whether this is the sort of chat-up line (kind of greeting) she should be listening to.

Bu quickly the angel gets down to business, telling Miryam that she will give birth to a child who will be: a)  Yeshua (Jesus), b) a son of the Most High God, c) A king of the Davidic dynasty who will rule over Israel. This is the first mention of Jesus is Luke’s story but of course he is the one already known to his readers, many of whom will know that his name means “God rescues.” Kings of Israel had been known as “sons of God” by virtue of their office, but Luke’s readers already know a deeper meaning of this term associated especially with the death and resurrection of Jesus. The Davidic king who will rule Israel is the longed- for Messiah, the one anointed (chosen and consecrated) by God to liberate his people. The sharp reader knows that such a child has to have a father of the line of David, so perhaps we should assume Miryam also knows this, and that it is the question behind her question about her virginity. In fact the words Luke gives her are a little less specific, more like, “How can this be so when I am not having sex with a man?” She has a man Yosef, whom she doubtless knows is of Davidic descent, to whom she is “betrothed” and with whom in the custom of her people, she might even have been living, prior to the wedding itself. 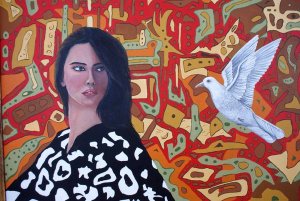 Christian scholars insist that there is nothing “sexual” in the angel’s description of God’s part in the conception of Jesus, but we do have to recognise that the verbs  to “come over” and to “cover or overshadow” do imply a possessive relationship, which is why Miryam is asked for her agreement. The child is called “the holy one born of you,” pointing ahead to Jesus’ continual commitment to belong to God.

Miryam’s willing agreement contains the crucial word “doule” female servant. She is not the  wife of God, but rather the slave girl who was sometimes, as in the case of the patriarchs of Israel, asked to bear children with the master of the household on behalf of a childless mistress. It’s possible that Luke saw Israel in this case as the childless (barren) wife. In any case, she gives her willing consent to this very intimate creative partnership with God.

Unlike the clumsier narrative in Matthew, Luke’s does not rule out sex between Miryam and Yosef prior to the birth of Jesus. He leaves well alone. He has told the reader that this pregnancy is of God, in a more complete way than the pregnancy of Elisheva. But he does not rule out human fatherhood altogether. Indeed, he knows that Joseph is needed if the child is truly to be of the “seed of David”.

That’s how I see the story, I think. But I am challenged and sometimes half-persuaded by a feminist reading of the whole story which points out how the men in the story are side-lined while all the vivid faith and joy are attributed to women. For such a view the Holy Spirit which overshadows Miryam is female, producing a holy child who is not only identified with the poor and powerless, but also with women. The very significant place of women in Luke’s Gospel is said to bear this out. Jesus is a new start for a rule of God which is utterly different from human hierarchy.

I think this is one-sided, but it makes me realise that my preferred interpretation may also be one-sided, especially as the feminist reading contains insights which I had overlooked.

I’m sure my readers can sort this out.

Tags: the moment of the angel