14 Yeshua returned to the Galil in the power of the Spirit, and reports about him spread throughout the countryside. 15 He taught in their synagogues, and everyone respected him.

16 Now when he went to Natzeret, where he had been brought up, on Shabbat he went to the synagogue as usual. He stood up to read, 17 and he was given the scroll of the prophet Yesha‘yahu. Unrolling the scroll, he found the place where it was written,

18 “The Spirit of the Lord is upon me;
therefore he has anointed me
to announce Good News to the poor;
he has sent me to proclaim freedom for the imprisoned
and renewed sight for the blind,
to release those who have been crushed,
19 to proclaim a year of the favor of the Lord.”

20 After closing the scroll and returning it to the attendant, he sat down; and the eyes of everyone in the synagogue were fixed on him. 21 He started to speak to them: “Today, as you heard it read, this passage of the Scripture was fulfilled!” 22 Everyone was speaking well of him and marvelling that such appealing words were coming from his mouth. They were even asking, “Can this be Yosef’s son?”

23 Then Yeshua said to them, “No doubt you will quote to me this proverb — ‘“Doctor, cure yourself!” We’ve heard about all the things that have been going on over in K’far-Nachum; now do them here in your home town!’ 24 Yes!” he said, “I tell you that no prophet is accepted in his home town. 25 It’s true, I’m telling you — when Eliyahu was in Isra’el, and the sky was sealed off for three-and-a-half years, so that all the Land suffered a severe famine, there were many widows; 26 but Eliyahu was sent to none of them, only to a widow in Tzarfat in the land of Tzidon. 27 Also there were many people with leprosy in Isra’el during the time of the prophet Elisha; but not one of them was healed, only Na‘aman the Syrian.”

28 On hearing this, everyone in the synagogue was filled with fury. 29 They rose up, drove him out of town and dragged him to the edge of the cliff on which their town was built, intending to throw him off. 30 But he walked right through the middle of the crowd and went away.

Rembrandt, Jesus in the synagogue

As this passage brings us to the active ministry of Jesus it’s interesting to reflect that Mark and John get to this point with 13 and 34 verses respectively, whereas Luke has already taken more than 3 chapters. This is evidence of Luke’s desire to give the reader as many clues as possible for interpreting the story of Jesus’ ministry. In fact as we shall see, this passage itself turns out to be yet another introduction to that ministry.

We should remind ourselves of Luke’s sources for what he is composing. He certainly had the Gospel of Mark, written up to 20 years before Luke’s Gospel. He also had either a copy of Matthew’s gospel or access to written material that Matthew also used as a source. Doubtless he also had other written and verbal sources, for the stories in his Gospel that we find nowhere else. Luke respected his sources but he also felt free to alter them to bring out the meaning of events in Jesus’ life.

It’s probable that this section of Luke’s gospel is based on Mark’s briefer story in his chapter 6, which reveals the lack of trust Jesus experienced in his home town. If we compare the two accounts we can see how much Luke has added, in particular the reading from Isaiah which is crucial to Luke’s understanding of Jesus’ ministry. We do not know whether this came from another source, or from Luke’s imagination.

All the gospels are agreed that Galilee was the early location of Jesus’ ministry. It was regarded by the Jewish leaders as a bit of a backwater, although its economic development was being fuelled at that time by the creation of larger estates under the control of rich, absentee landlords. Its economy and culture provides the language and background of Jesus’ teaching. When Jesus visited his home town he already had a reputation as a prophet in Galilee.

Luke shows Jesus easily sharing the custom and tradition of his people, by going to the village synagogue (religious school and gathering place developed by the Pharisees), to participate in the confession of faith (Shema), the recital of the ten commandments, the readings of Torah and Prophets, and the teaching from them. Active participation in these was limited to adult males.

Jesus is represented as choosing the passage which he read and expounded. The quotation is not accurate as it misses out a line about binding up the broken-hearted and adds a line about the oppressed from Isaiah 58. We can be sure the resultant text is what Luke wanted as a programme for Jesus’ ministry:

The last term refers to the Year of Jubilee as described in Leviticus 25, which is to take place every fiftieth year, when slaves will be freed, land restored to its original owners and debts cancelled, in effect a restoration of the promised land to is original condition. (Well not quite, since it originally belonged to Canaanites!) Most scholars think that this festival was never observed in Israel, so we are left with the question as to whether Luke saw Jesus using it as a symbolic point of reference for his work, or whether he thought Jesus actually announced such a year from God. The first option seems more likely.

The ministry announced in Isaiah is a prophetic calling directed to the poor, the imprisoned, the blind, and the crushed or oppressed. Even if we allow these terms to have a more than literal meaning, Luke is still pointing to a socially disruptive kind of justice: The losers in Jewish  society will be favoured by Jesus’ ministry, just as the prophets of Israel had favoured them and denounced the idle rich. It’s good for the modern reader to tune in to the prophetic language used by Luke, as it is the polar opposite of the language of modern capitalism in the UK, which idolises the rich and accuses the poor of being feckless. In the language of the prophets, it is the rich who are feckless burdens on the rest of society. Of course Jesus ministry was more than social justice, but never less.

Luke expects that the reader will be able to see more clearly what he means by good news for the poor, freedom for prisoners, sight for the blind and release for the crushed, in the stories of what Jesus did and said. Jesus’ claim that the prophecy was being fulfilled as he spoke must have startled his fellow villagers, who nevertheless reacted with initial approval. 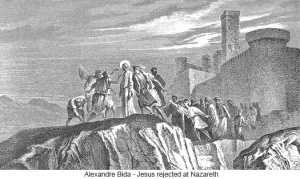 The scene that follows can only be understood with the help of Mark chapter 6 where we read that Jesus was unable to heal people in Nazareth because of their lack of trust. That would seem to be the explanation for the villagers challenging Jesus to “heal himself”, that is to heal the Nazareth sick as he has reportedly done elsewhere. This leads to Jesus quoting two example of how prophetic ministry has been directed to foreigners rather than Jews. Nice commentators have said that Jesus was emphasising the “inclusiveness” of his ministry, but that is clearly nonsense. If you talk about some people being by-passed you’re talking exclusion, not inclusion. Jesus’ words are harsh: he is saying that those who feel entitled to God’s goodness are going to get nothing; while those who expect nothing will be surprised by his/her generosity. The Nazareth villagers understand him only too well and decide that they would be doing Israel and her God a favour if the got rid of him, which of course is precisely what the Sanhedrin decided at the end of Jesus’ ministry. Luke was writing for people who knew the story of Jesus and could appreciate his irony in making the beginning match the end.