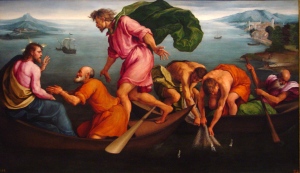 5 One day, as Yeshua was standing on the shore of Lake Kinneret, with the people pressing in around him in order to hear the word of God, 2 he noticed two boats pulled up on the beach, left there by the fishermen, who were cleaning their nets. 3 He got into one of the boats, the one belonging to Shim‘on, and asked him to put out a little way from shore. Then he sat down and taught the people from the boat.

4 When he had finished speaking, he said to Shim‘on, “Put out into deep water, and let down your nets for a catch.” 5 Shim‘on answered, “We’ve worked hard all night long, Rabbi, and haven’t caught a thing! But if you say so, I’ll let down the nets.” 6 They did this and took in so many fish that their nets began to tear. 7 So they motioned to their partners in the other boat to come and help them; and they came and filled both boats to the point of sinking. 8 When he saw this, Shim‘on Kefa fell at Yeshua’s knees and said, “Get away from me, sir, because I’m a sinner!” 9 For astonishment had seized him and everyone with him at the catch of fish they had taken, 10 and likewise both Ya‘akov and Yochanan, Shim‘on’s partners. “Don’t be frightened,” Yeshua said to Shim‘on, “from now on you will be catching men — alive!” And as soon as they had beached their boats, they left everything behind and followed him. 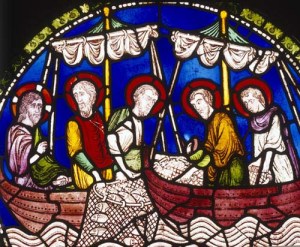 This is a complex composition by Luke, who alone puts this story in this place in Jesus’ ministry. Mark 1: 16-20 gives a version of Jesus’ calling Peter, Andrew, James and John, in which he uses the expression,”I will make you into fishers of men.” John 21 gives a story placed after Jesus’ resurrection when he appears to his disciples at the lake when they have fished all night for nothing. Luke himself, or one of his sources, may have turned a resurrection story into a story about the call of the first disciples; or of course John may have turned a story about the call of disciples into a resurrection story. My guess is that the bit about fishing all night for nothing, fits the dark aftermath of the crucifixion better than it fits the start of Jesus’ ministry, and so I think it is Luke who has transferred the story. If so, he brings the abundant life of resurrection into the time of Jesus’ ministry.

Probably also, by the time Luke was writing the Christian  fish symbol -the Greek Ichthus (fish) standing for the initial letters of “Iesus Christos theou uios soter”, Jesus Christ, son of God, saviour, would have been in use as a sign of Christian belief. The gospels connect this tradition with the tradition that the first disciples were fishermen.

The sea in biblical narrative always stands for the realm of chaos, the great deep from which God’s creative power fashioned the world and life. To be “on the sea” is to be in a place of chaos and creativity. To put out from the land, is to leave safety and security behind. So Luke is using a very precise symbolic language when he puts Jesus on the water to teach the people. He means that the word comes from a place of chaos and creativity. And when he speaks of going deeper into this risky realm, he is telling the reader that it is when Jesus and his disciples are farthest from safety they they are able to catch most people for God’s kingdom. The story hints that it will be Jesus’ journey into the power of chaos and death that draws people to place their trust in him. 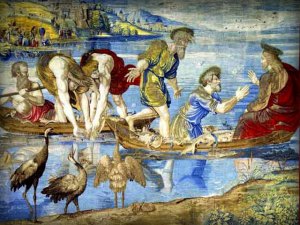 That’s why Shimon is so overwhelmed with the great catch of fish: it reveals Jesus as a master of the sea, the realm which challenges the power of God. The phrase “catching men” or as Mark has it “fishers of men” points to the nature of Jesus mission and that of his disciples: they leave all that is familiar, safe, civil, homely and controlled, in order to find people who accept God’s Rule. Probably these will be people who already find themselves in deep waters, the poor, the rejected, the slaves, the sinners, the diseased.

Mark’s narrative specifies James and John leaving their father in the boat with the hired men; Luke simply says, they left everything behind. Both want to emphasise that following Jesus is not for the faint-hearted.