DENMARK VOTES TO CONFISCATE THE GOODS OF REFUGEES

Nevertheless, to you who are listening, what I say is this:

“Love your enemies!
Do good to those who hate you,
28 bless those who curse you,
pray for those who mistreat you.

29 “If someone hits you on one cheek,
offer the other too;
if someone takes your coat,
let him have your shirt as well.

30 “If someone asks you for something,
give it to him;
if someone takes what belongs to you,
don’t demand it back.

If we compare Luke’s sermon on the plain with Matthew’s sermon on the mount (Matthew 5 and 6), we will see the Luke’s is much shorter and that even where the same teaching occurs it is placed in a different relationship to other teachings. Here Luke places the teaching on love of enemies immediately after the introductory blessings and curses (see yesterday’s blog), indicating the importance he attaches to it; whereas Matthew gives teachings on the nature and role of discipleship after the blessings. Matthew recasts the teaching on love for enemies as part of a sequence in which Jesus compares his teaching with the teachings given to the ancestors.

When we compare this passage with Matthew 5: 38-48, we can see that the teaching is fundamentally the same, although the wording and framework are different. Yesterday I noted that scholars suppose some relationship between Matthew and Luke in respect of the teachings of Jesus, although they disagree about exactly what it is. Here we can see that although there are many differences, the command to love enemies, to respond peacefully to provocation, to give generously to those who can’t pay back, and to imitate the fatherly God are common to both Gospels, as is the whole argument about doing more good than is commonly expected. In both Gospels a radical voice is commanding a new way of living in terms that anyone can understand, supported by an argument which assumes that human beings can share the character of God.

Is this the voice of Jesus? Of course we can see the freedom with which the writers treat their sources, but I would not hesitate to answer yes to that question. The memory of the teaching voice of Jesus, dry and compassionate as sand, scouring the conventional overlay from the consciences of his hearers, so that they are exposed to God’s terrible goodness, can be detected behind the voices of the different authors. I do not mean that we often have the precise words Jesus spoke (although I think we have them more often than some scholars suppose) but rather that we have his teachings, mediated through the faith of the the first assemblies of Jesus, and passed down in memorable forms, such as the poetic structure we see in the present passage, to new generations of believers until they were collected and written down.

“Love your enemies,” is such a astonishing utterance, even if you’ve heard it many times. What a nerve, that Jesus sould expect people to reject their own justifiable fear and hate for people who want to harm them! Why, the very basis of human community is that birds of a feather flock together to protect themselves against birds of a different feather; families, tribes, clans and nation states tell their members to love each other and to oppose the outsider. A great part of the so-called refugee crisis in the UK is the expression of tribal distrust and even hatred for the needy incomer.

And when it comes to people who are real enemies by any standard, the jihadist thugs of Daesh, for example, what point is there in telling us to love such  scum? Jesus didn’t answer that question except by continuing to love the kind of religious and imperialist scum, with whom we might have sympathised,  that sent him to the execution stake. The record is quite clear about this:  Jesus lived and died this command.

Of course we must separate the word “love” in this command from any notion of affection. Jesus was not daft; we will not feel affection for those who hurt us. The words “do good to those who hate you” are an explanation of the command. We must act for the enemy’s good as well as our own. That need not exclude a measure of resourceful cunning to help the enemy see us as unthreatening, while making it difficult for him to harm us. Gandhi, who acknowldeged his debt to Jesus is this regard, was a master of using non-violent opposition to protect his people from the murderous power of the British Empire. Gandhi also admitted that stopping the enemy doing evil, was part of doing him good; and that if you didn’t have the courage to stop him non-violently, it was better to use violence than to do nothing. 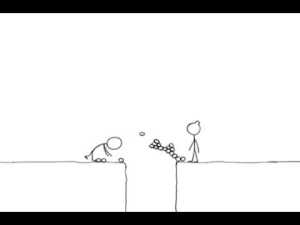 With personal enmity we are rarely faced with open violence and so have greater scope for the creative use of goodness, as we see in the examples Jesus gave of surprising generosity to those who are grabbing our possessions. Jesus wants us to see that we are not locked into a dimension in which we simply have to mirror the wrong that others do to us. There is always another dimension, whom we call God, of justice, generosity and compassion, which sets us free to act with the wit and courage of God’s children. The “sinners” Jesus mentions here are those who regard themselves as living in one dimension in which there is no alternative to imitative hate and violence; it’s what you feel and do. Jesus’ disciples, by contrast, are expected to trust the open dimension of God’s goodness and to act in ways that other folk think impossible or daft. St. Paul learned this truth from Jesus: the daftness of God is wiser than human wisdom; and the weakness of God is stronger than human strength.

Embedded in this passage is the positive version of the “golden rule”: treat others the way you would like them to treat you, which is another way of saying, love your neigjbour as yourself. If we were doing wrong and hurtful things, how would we wish to be treated? I would wish to be stopped, made to do recompense and restored to community. So the love Jesus commanded is far from being a soft option for the wrongdoer; it is never less than justice, but always more.

Most of my life is over (although a bit more would be fine!); and the witness of my 73 years of living is that this teaching and the example that backs it up are the key to human happiness on this earth and in heaven.