37 The next day, as they were coming down out of the hill country, a large crowd met him. 38 Suddenly a man in the crowd shouted, “Rabbi! Look at my son, I beg you, because he’s my only child! 39 What happens is this: a spirit seizes him, and suddenly it lets out a shriek and throws him into convulsions with foaming at the mouth; and only with difficulty will it leave him. It’s destroying him! 40 I asked your disciples to drive the spirit out, but they couldn’t.” 41 “Perverted people, without any trust!” Yeshua answered, “How long do I have to be with you and put up with you? Bring your son here.” 42 Even as the boy was coming, the demon dashed him to the ground and threw him into a fit. But Yeshua rebuked the unclean spirit, healed the boy and gave him back to his father. 43 All were struck with amazement at the greatness of God.

Luke is using the gospel of Mark as his source but here he abbreviates it very considerably. In effect, he leaves out the material in Mark that focuses on the issue of faith: Mark’s moving narrative of the father crying out, “Lord I believe, help my unbelief”; and the disciples asking Jesus why they couldn’t heal the boy only to be told, “this kind cannot be cast out except by prayer.”  The effect of Luke’s editing is to make the story less dramatic and to remove the issue of faith from his presentation of Jesus’ healings. He is more concered to portray Jesus chanelling the goodness of God to people on the margins of society, than to ask about the relationship of healing to the faith of the healer and the patient.

I think I know why he does it. Mark’s presentation of Jesus’ healing emphasises the faith or trust of the patient/ patient’s family/friends as a key element of cooperation in the healing that Jesus brings. This coiuld be very disturbing to those readers whose illnesses had not been cured: was that due to their lack of faith? I have been asked this very question in the course of my pastoral care. I have always answered that although trust in the healer may assist healing, it cannot guarantee a cure; nor does lack of trust prevent a cure; nor the absence of a cure prove lack of trust.

Luke notes that the boy is the father’s only son, reminding the reader of how Jesus who has prophesied his own death, has been revealed in his transfiguration as God’s only son. There is a subtle connection between the possessed child and the son of God who will be overtaken by evil powers and killed. It is Jesus’ willingness to put himself in mortal danger that allows him to be alongside the needy people, chanelling God’s goodness; he is not above them offering succour, but beside them, battling the evil powers that try to diminish them, and him. 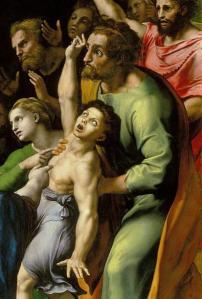 Luke records that the people saw the truth, expressing amazement at the greatness of God rather than that of Jesus. There is a splendid Hasidic story which makes this point:

The Baal Shem Tov, founder of the modern Hasidic movement, asked his disciples, “Why is Elijah called the greatest of the prophets?” They answered with stories of his miracles. “No!” said the Baal Shem, “but because it is told that when Elijah defeated the prophets of Baal by the test of fire, the people did not cry out, ‘Great is Elijah!’ but rather, ‘Great is the Lord!'”

Matthew, Mark and Luke all quote Jesus’ exasperated outburst at his disciples’ ineptitude, which he sees as lack of trust in God. He does not mean trust in God’s power to do miracles but rather in God’s command that they should be alomgside the weak, fighting for goodness.

Those who today feel called to care for the bodies, minds and souls of people, and who are content to do so for a reasonable salary, are also channels of God’s goodness and known to be so by their patients.The best of them, while bringing to the patient the God-given

power of scientific medicine,  fight alongside their patients rather than dominating them.