Today, the Monday of Holy Week, the blog jumps to Luke’s narrative of Jesus arrest and death, beginning with the entry into Jerusalem

After saying this, Yeshua went on and began the ascent to Yerushalayim. 29 As he 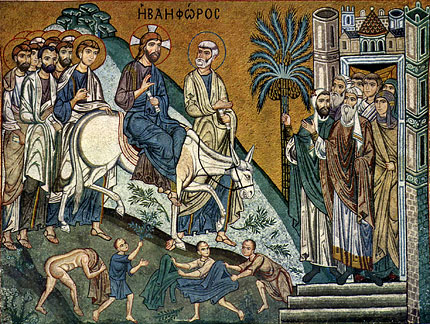 approached Beit-Pagei and Beit-Anyah, by the Mount of Olives, he sent two disciples 30 instructing them, “Go into the village ahead; on entering it, you will find a colt tied up that has never been ridden. Untie it and bring it here. 31 If anyone asks why you are untying it, tell him, ‘The Lord needs it.’” 32 Those who were sent went off and found it just as he had told them. 33 As they were untying the colt, its owners said to them, “Why are you untying the colt?” 34 and they said, “Because the Lord needs it.” 35 They brought it to Yeshua; and, throwing their robes on the colt, they put Yeshua on it. 36 As he went along, people carpeted the road with their clothing; 37 and as he came near Yerushalayim, where the road descends from the Mount of Olives, the entire band of disciples began to sing and praise God at the top of their voices for all the powerful works they had seen:

38 “Blessed is the King who is coming in the name of The Lord!”
“Shalom in heaven!”
and
“Glory in the highest places!”
39 Some of the Pharisees in the crowd said to him, “Rabbi! Reprimand your disciples!” 40 But he answered them, “I tell you that if they keep quiet, the stones will shout!”

41 When Yeshua had come closer and could see the city, he wept over it, 42 saying, “If you only knew today what is needed for peace! But for now it is hidden from your sight. 43 For the days are coming upon you when your enemies will set up a barricade around you, encircle you, hem you in on every side, 44 and dash you to the ground, you and your children within your walls, leaving not one stone standing on another — and all because you did not recognize your opportunity when God offered it!”

45 Then Yeshua entered the Temple grounds and began driving out those doing business there, 46 saying to them, “The bible says, ‘My House is to be a house of prayer, but you have made it into a den of robbers!” 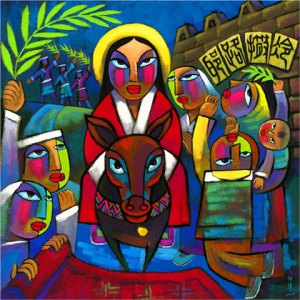 Luke alters the narrative of Mark’s Gospel which is his source. Mark tells a subtle and disruptive story of Jesus’ mocking use of Zechariah’s prophecy ( of a peaceful and humble King coming to Jerusalem on a donkey – Zechariah 9:9) and of his popularity with the crowd of pilgrims, but Luke places his emphasis on the event as a prophet’s entry to the Holy City, acclaimed by his disciples. Like many prophets before him Jesus had wanted to embrace the city in God’s name, ( see chapter 13:34); now the reader is reminded of his lament by his sad prophecy of the city’s destruction. It was destroyed by the Romans in 70 CE, before Luke wrote his Gospel, but the details in Jesus’ prophecy relate to the destruction of the city in 587 BCE. In effect Luke’s Jesus prophesies a new destruction and a new exile, mourning the city’s rejections of him and his ministry, which was a God- given chance to find a way of peace. This incident is recorded only by Luke, and brings into play his theme of Jesus’rejection by the people as a refusal of God’s protective love.

Luke then sharply abbreviates Mark’s account of the clearing of traders from the temple. He is wary of depicting Jesus as aggressive, and simply notes his defence of the temple as a house of prayer. He excludes Mark’s crucial reference to it as a house of prayer for all nations, that is, for the Gentiles too.

In effect, these changes turn the public provocation described by Mark, into a disciplined prophetic act by Jesus and his disciples, making a final offer to its people, who reject it, and thereby, the future of their city. Luke’s story of Jesus places the excluded people at the heart of his concern. In the story of Jesus’ ministry in Jerusalem, Luke shows that Jesus is also excluded by the ruling elite and the crowd, which in turn triggers the (self-) exclusion of the city from God’s future. 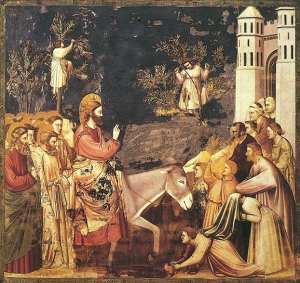 I live in a city where a huge investment is being made to establish an offshoot of the Victoria and Albert Museum at its waterfront, while many citizens are inadequately housed and suffer all,the disadvantages of persistent poverty. They and their needs are excluded from the city’s plans which aim to make it a place of cultural excellence which will attract visitors and businesses. Of course people will defend these plans as the kind of planning needed to make the city prosperous and able to provide more jobs  for its citizens. This fails to impress those who have seen the latest statistics revealing that 1 in 5 of the city’s children will grow up in poverty.

Luke’s Jesus, in his ministry to the excluded people of his time, had demonstrated where he stood; he enters Jerusalem and prophesies on their behalf and on behalf of the God who has included them in his kingdom.  The stones would shout if the disciples were silent because they know that there will soon be not one of them standing on the other.