With that, the whole Sanhedrin got up and brought Yeshua before Pilate, 2 where they started accusing him. “We found this man subverting our nation, forbidding us to pay taxes to the Emperor and claiming that he himself is the Messiah — a king!” 3 Pilate asked him, “Are you the king of the Jews?” And he answered him, “The words are yours.” 4 Pilate said to the head priests and the crowds, “I find no ground for a charge against this man.” 5 But they persisted. “He is inciting the people with his teaching throughout all Y’hudah — he started in the Galil, and now he’s here!” 6 On hearing this, Pilate asked if the man was from the Galil; 7 and when he learned that he was under Herod’s jurisdiction, he sent him over to Herod, who at that time happened to be in Yerushalayim too. 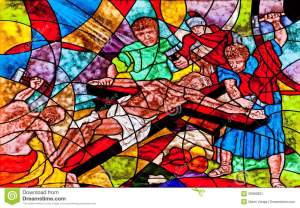 8 Herod was delighted to see Yeshua, because he had heard about him and for a long time had been wanting to meet him; indeed, he hoped to see him perform some miracle. 9 He questioned him at great length, but Yeshua made no reply. 10 However, the head cohanim and the Torah-teachers stood there, vehemently pressing their case against him. 11 Herod and his soldiers treated Yeshua with contempt and made fun of him. Then, dressing him in an elegant robe, they sent him back to Pilate. 12 That day Herod and Pilate became friends with each other; previously they had been enemies.

13 Pilate summoned the head priests, the leaders and the people, 14 and said to them, “You brought this man before me on a charge of subverting the people. I examined him in your presence and did not find the man guilty of the crime you are accusing him of. 15 And neither did Herod, because he sent him back to us. Clearly, he has not done anything that merits the death penalty. 16 Therefore, what I will do is have him flogged and release him.” 17 [a] 18 But with one voice they shouted, “Away with this man! Give us Bar-Abba!” 19 (He was a man who had been thrown in prison for causing a riot in the city and for murder.) 20 Pilate appealed to them again, because he wanted to release Yeshua. 21 But they yelled, “Put him to death on the stake! Put him to death on the stake!” 22 A third time he asked them, “But what has this man done wrong? I haven’t found any reason to put him to death. So I’m going to have him flogged and set free.” 23 But they went on yelling insistently, demanding that he be executed on the stake; and their shouting prevailed. 24 Pilate decided to grant their demand; 25 he released the man who had been thrown in prison for insurrection and murder, the one they had asked for; and Yeshua he surrendered to their will.

26 As the Roman soldiers led Yeshua away, they grabbed hold of a man from Cyrene named Shim‘on, who was on his way in from the country. They put the execution-stake on his back and made him carry it behind Yeshua. 27 Large numbers of people followed, including women crying and wailing over him. 28 Yeshua turned to them and said, “Daughters of Yerushalayim, don’t cry for me; cry for yourselves and your children! 29 For the time is coming when people will say, ‘The childless women are the lucky ones — those whose wombs have never borne a child, whose breasts have never nursed a baby! 30 Then

They will begin to say to the mountains, ‘Fall on us!’
and to the hills, ‘Cover us!’
31 For if they do these things when the wood is green, what is going to happen when it’s dry?”

32 Two other men, both criminals, were led out to be executed with him. 33 When they came to the place called The Skull, they nailed him to a stake; and they nailed the criminals to stakes, one on the right and one on the left. 34 Yeshua said, “Father, forgive them; they don’t understand what they are doing.”

They divided up his clothes by throwing dice. 35 The people stood watching, and the rulers sneered at him. “He saved others,” they said, “so if he really is the Messiah, the one chosen by God, let him save himself!” 36 The soldiers too ridiculed him; they came up, offered him vinegar 37 and said, “If you are the king of the Jews, save yourself!” 38 And there was a notice over him which read, 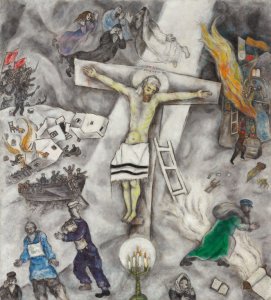 THE KING OF THE JEWS

39 One of the criminals hanging there hurled insults at him. “Aren’t you the Messiah? Save yourself and us!” 40 But the other one spoke up and rebuked the first, saying, “Have you no fear of God? You’re getting the same punishment as he is. 41 Ours is only fair; we’re getting what we deserve for what we did. But this man did nothing wrong.” 42 Then he said, “Yeshua, remember me when you come as King.” 43 Yeshua said to him, “Yes! I promise that you will be with me today in Paradise.”

44 It was now about noon, and darkness covered the whole Land until three o’clock in the afternoon; 45 the sun did not shine. Also the curtain in the Temple was split down the middle. 46 Crying out with a loud voice, Yeshua said, “Father! Into your hands I commit my spirit. With these words he gave up his spirit.

47 When the Roman officer saw what had happened, he began to praise God and said, “Surely this man was innocent!” 48 And when all the crowds that had gathered to watch the spectacle saw the things that had occurred, they returned home beating their breasts. 49 All his friends, including the women who had accompanied him from the Galil, had been standing at a distance; they saw it all.

There are a number of elements unique to Luke’s account of the murder of Jeaus:

Like the other gospel writers, Luke depicts the crucifixion of Jesus as an apocalyptic event. The sun is darkened and the curtain that screens the Holy of Holies in the temple is torn apart.Luke takes this latter detail from Mark and uses it to signal the end of the Jewish Temple religion, a hint of the coming destruction of the temple itself. For Luke, the killing of Jesus is the beginning of the end time, in which the message of Jesus will be announced world-wide, before the final judgement of God. Most of the first Christains believed that judgement was imminent; Luke doubtless thought it might take some time, but no believer imagined as most now do, that the world would simply continue as it is for the foreseeable future. Modern readers should be aware of this difference as they read.

Luke’s story shows Jesus as unmoved by suffering and dying, remaining true to his embrace of sinners, outcasts and foreigners, even as he is mocked and tortured. This expresses his character as God’s Son; in dying as in living, his divinity for Luke is his creative power to include people in Gid’s merciful Rule. He remains at all times in command, his dignity is unbroken. This is in contrast to the desperate figure described by Mark who howls that God has abandoned him.

Jesus taught his followers to pray that they would not be put to the test. Jesus too made this prayer, and according to all the gospels, made it specifically in the face of his death, in Gethsemane garden. Yet he was put to the test. His refusal to compromise or run away led to the routine atrocity of his torture and death on the execution stake. According to the gospels, he endured without denying his gospel.

It ‘s important not simply to praise Jesus’ courage unto death: many people, including many soldiers and the suicide bombers of Brussels have had that courage. No, it is the purpose of his living and dying that matters: his determination that God’s compassionate justice should be announced and delivered in the face of all that would deny and destroy it. 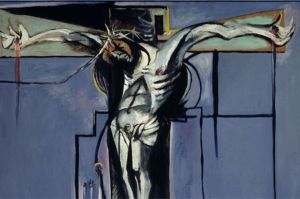 I, as a man never quite ready for the tests of my life, as a man often compromising, frequently dodging the situations where my faith might have hurt, look with admiration and love towards the man who took on the bullying of the mob, the vile hypocrisy of religion and the casual brutality of the state, and went the full distance until their official representative, the centurion, had to admit defeat. It is, as theologians say, the perfect offering to God, that I cannot make.