On hearing this, one of the people at the table with Yeshua said to him, “How blessed are those who eat bread in the Kingdom of God!” 16 But he replied, “Once a man gave a banquet and invited many people. 17 When the time came for the banquet, he sent his slave to tell those who had been invited, ‘Come! Everything is ready!’ 18 But they responded with a chorus of excuses. The first said to him, ‘I’ve just bought a field, and I have to go out and see it. Please accept my apologies.’ 19 Another said, ‘I’ve just bought five yoke of oxen, and I’m on my way to test them out. Please accept my apologies.’ 20 Still another said, ‘I have just gotten married, so I can’t come.’ 21 The slave came and reported these things to his master.

H“Then the owner of the house, in a rage, told his slave, ‘Quick, go out into the streets and alleys of the city; and bring in the poor, the disfigured, the blind and the crippled!’ 22 The slave said, ‘Sir, what you ordered has been done, and there is still room.’ 23 The master said to the slave, ‘Go out to the country roads and boundary walls, and insistently persuade people to come in, so that my house will be full. 24 I tell you, not one of those who were invited will get a taste of my banquet!’”

In Matthew’s version of this parable it is combined with the story of a wedding banquet and a king who destroys his enemies. Luke’s version is clearer and subtler, containing elements that may go back to Jesus.

The story takes place in the same “culture of mutual hospitality” as the preceding teaching in this chapter. The owner of the house gives a banquet and invites the sort of people whose presence will do him honour and from whom he may expect favours in return. That’s why his anger at the refusal of his invitations is credible: he has been, as we now say, disrespected. His decision to invite the poor, the disfigured, the blind  and the lame is not out of compassion but out of pique, as his determination to fill his house to bursting with the people of the streets and country lanes. He actions are a bit over the top and comic- won’t he actually look ridiculous in the eyes of his social equals? – but that subversive comedy is common to some of Jesus’ greatest stories, such as “The Prodigal”which shows a father who is unwisely favourable to his disreputable son. Here a man of substance is unwisely enraged at his equals and foolishly committed to his social inferiors.

It seems to me that any good interpretation of these parables has to pay attention to the elements of harsh comedy and of possible offence if they are applied to God.  Yes, of course the parable models Jesus’ rejection by the religious authorities and his welcome to the outcast, but are we to think Jesus only turned to the latter because he was rejected by the former? We might say that if it is applied to God rather than Jesus, it is more subversive: God has given up on the leaders and their disrespect for his invitation, and now in Jesus, he has turned to the poor and outcast. Does that mean we are to think of God acting out of pique at human disrespect? Surely God’s goodness is always for everybody? Yes, of course.

So why does the parable seem to say otherwise, and in particular why does it portray God as a rich man miffed at a refused invitation? Answer: because there is something offensive in God’s initiative through Jesus. God’s goodness is offered to all but is rejected by the self-righteous and wealthy, while being welcomed by the sinners and the poor. Therefore God turns in anger from those who reject him and in love towards those who want to share his hospitality. As the prophets of Istael proclaimed, you cannot have a God of love without a God of anger, for love can be hurt. This is an uncomfortable God, who risks his reputation in his dealings with human beings, and who may offend pious people who have  decided that their God ought to be above such behaviour.

If we try to turn this story into doctrinal statements about God, we will be forgetting that it is, like all of Jesus’ stories,  a pointer to the way God is working, rather than a theological definition. Those who listen to it are challenged to see themselves in it. I like to interpret all the two-way splits in Jesus’ teaching, sheep and goats, rich and poor, as a dividing line which runs through the middle of each individual person rather than between one group and another. Part of me that thinks it’s rich, rejects Jesus’ invitation, while the other part accepts it joyfully, knowing its own poverty; part of me is offended by God turning his back on me, while the other part is delighted he has turned towards me. I have to decide which person I want to be; that’s the point of parables. 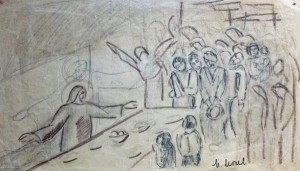 I can’t leave the parable, however, without noting that after all the invitation is to party. True, the party stands for human beings sharing God’s life, but it remains significant that Jesus described that sharing with the image of a party. Trusting Jesus’ way involves tough decisions and may entail suffering, but its purpose and abiding reality is joy.