LUKE 15
8 “Another example: what woman, if she has ten drachmas and loses one of these valuable coins, won’t light a lamp, sweep the house and search all over until she finds it? 9 And when she does find it, she calls her friends and neighbors together and says, ‘Come, celebrate with me, because I have found the drachma I lost.’ 10 In the same way, I tell you, there is joy among God’s angels when one sinner repents.”

My instinct was to consider this small parable along with the parable of the lost son, but I’ve chosen not to do so, because Luke has carefully prefaced that great parable with not one but two smaller ones, in order to prepare the reader/ hearer for that astonishing story by creating a clear pattern of lost and found, as a model for God’s relationship to “sinners”

As in the story of the lost sheep, this parable emphasises the owner’s search for the lost item, in this case a drachma, which at one time was worth as much as a Roman denarius but in Jesus’ time probably less. As a denarius was roughly a day’s wage, we can guess that the owner’s savings of ten drachma probably represent at least one week’s wages. A careful housewife whose husband was working regularly might hope to have gathered as much to protect against bad times.

Jesus is using as his main character a woman of his own Galilean peasant class, to communicate his message about God. Although he is brief he gives just enough detail for his hearers to identify with, and smile at this energetic woman and her problem. All classes of people know what it is to lose something they prize; even if he loss is not disastrous, it is infuriating. The lighting of the lamp and the use of the broom are small, ordinary details which keep the hearer interested in the outcome.

The climax of the tale is the woman’s pleasure in finding the lost drachma. She’s daft enough to forget her own responsibility for losing it in first place and garrulous enough to share the whole story with her neighbours as something to celebrate. In the case of the shepherd, the hearers are meant to realise the crazy risk he had taken, while in this case they are meant to think, “Daft old bat, but just like me!”

The pay-off line is important; it says, literally, ” In the same way I tell you, there is joy before the angels in heaven when one sinner turns to God.” The preposition “emprosthen” means before rather than among and points the hearer to God, who celebrates like a Galilean housewife. As in the case of the shepherd parable, this one offers a revelation which may be offensive to pious ears. Is it respectful to characterise God in this way, especially as regards the human emotions involved, of irritation at the loss and resolute searching for it as a first priority, not to mention making a big fuss over a very small gain, well, not even a gain at all, but just a restoration of what had been there in the first place? And then there’s the uncomfortable question about how the coin or the sinner got lost. Is there some carelessness attributed to God? 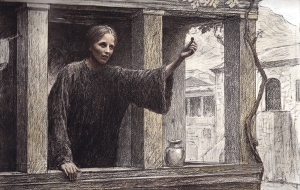 Small as it is, this parable like its predecessor, gives an uncompromising image of God’s delight in the recovery of lost people, while questioning the more delicate and reverential images used by Jesus’ opponents. Jesus’ shepherd who abandons the flock to find the lost sheep is easily sentimentalised into the subject of stained glass windows, but I’ve never seen an image in church of God the housewife.