Speaking to the disciples, Yeshua said: “There was a wealthy man who employed a general manager. Charges were brought to him that his manager was squandering his resources. 2 So he summoned him and asked him, ‘What is this I hear about you? Turn in your accounts, for you can no longer be manager.’

3 “‘What am I to do?’ said the manager to himself. ‘My boss is firing me, I’m not strong enough to dig ditches, and I’m ashamed to go begging.4 Aha! I know what I’ll do — something that will make people welcome me into their homes after I’ve lost my job here!’

5 “So, after making appointments with each of his employer’s debtors, he said to the first, ‘How much do you owe my boss?’ 6 ‘Eight hundred gallons of olive oil,’ he replied. ‘Take your note back,’ he told him. ‘Now, quickly! Sit down and write one for four hundred!’ 7 To the next he said, ‘And you, how much do you owe?’ ‘A thousand bushels of wheat,’ he replied. ‘Take your note back and write one for eight hundred.’

8 “And the employer of this dishonest manager applauded him for acting so shrewdly! For the worldly have more wisdom than those who have received the light — in dealing with their own kind of people!

9 “Now what I say to you is this: use worldly wealth to make friends for yourselves, so that when it gives out, you may be welcomed into the eternal home. 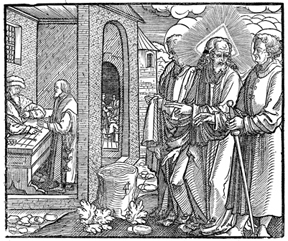 Many scholars have found difficulty in interpreting this parable because they don’t want to accept its obvious message, which offends their pious faith. Jesus was playing with the notion of God’s judgement on human lives, which he respresents in his story by the judgement faced by the manager. This kind of story asks the audience, “What would you do in this situation?” The answer Jesus presents would impress the audience by its resourcefulness. At the expense of his boss, the manager makes new friends who will protect his future.Jesus was telling his audience that faced with the judgement of God, they ought to get into the business of forgiving the boss’s debtors, as he was doing, so that they would have friends in heaven. If the boss will not deny his manager’s forgiveness of debt, to avoid losing face, how much less will God deny the message of forgivness! And if the dishonest manager needed friends in his crisis, how much more will sinful human beings need them at the time of judgement!

This robust and witty defence of the gospel of forgiveness, which imagines the bearer of the gospel as a dishonest manager (not a usual image of Jesus!), is then merged with the more usual command to “make friends with your worldly wealth”, that is, to give it to the poor, so that you will have friends in heaven. Release from sins and release from poverty are linked by the common language of debt and forgiveness of debt.

This a merry and unconventional way of celebrating the gospel message. I’m sure at times Jesus enjoyed scandalising his disciples. This and the parables of chapter 15 all emphasise the counter- intuitive and socially disruptive nature of God’s dealings with those who are considered “lost.” The notion of “friends in heaven” imagines those to whom you have done some good taking your side in God’s court of judgement. The idea will probably seem trivial to those who have more reverence for God’s judgement than God does or Jesus did. I think it does honour to God to think that he wants to take into account all the evidence