20 The Pharisees asked Yeshua when the Kingdom of God would come. “The Kingdom of God,” he answered, “does not come with visible signs; 21 nor will people be able to say, ‘Look! Here it is!’ or, ‘Over there!’ Because, you see, the Kingdom of God is among you.” 22 Then he said to his disciples, “The time is coming when you will long to see even one of the days of the Son of Man, but you will not see it. 23 People will say to you, ‘Look! Right here!’ or, ‘See! Over there!’ Don’t run off, don’t follow them, 24 because the Son of Man in his day will be like lightning that flashes and lights up the sky from one horizon to the other. 25 But first he must endure horrible suffering and be rejected by this generation.

26 “Also, at the time of the Son of Man, it will be just as it was at the time of Noah. 27 People ate and drank, and men and women married, right up until the day Noah entered the ark; then the flood came and destroyed them all. 28 Likewise, as it was in the time of Lot — people ate and drank, bought and sold, planted and built; 29 but the day Lot left S’dom, fire and sulfur rained down from heaven and destroyed them all. 30 That is how it will be on the day the Son of Man is revealed. 31 On that day, if someone is on the roof with his belongings in his house, he must not go down to take them away. Similarly, if someone is in the field, he must not turn back — 32 remember Lot’s wife! 33 Whoever aims at preserving his own life will lose it, but whoever loses his life will stay alive. 34 I tell you, on that night there will be two people in one bed — one will be taken and the other left behind. 35 There will be two women grinding grain together — one will be taken and the other left behind.” 36 [a]

37 They asked him, “Where, Lord?” He answered, “Wherever there’s a dead body, that’s where the vultures gather.” 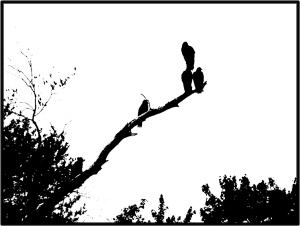 There is agreement amongst Mark, Matthew and Luke, that Jesus made a prophecy about the future, which made reference to the coming of God’s kingdom and of the Son of Man. Readers who want to compare should read Mark chapter 13. I can see reasons why this material is often ascribed by scholars to the creativity of the first believers, as a way of explaining the death of Jesus as part of God’s plan. But I can also see that Jesus’ prophetic ministry might well have included a prophetic utterance about the catastrophic consequences of violent opposition to Rome.

For Luke, as for his fellow gospel writers, the Son of Man is a figure borrowed from Daniel chapter 7 where he is a symbol of he humane kingdom which will replace the bestial empires of world powers. It will be ruled on God’s behalf by his saints.  I think it’s possible that Jesus used the phrase to characterise his own ministry. Doubtless the enthusiastic faith of the early believers led to increased speculation about the arrival of the kingdom and the Son of Man, sometimes  encouraging credulous people to support manipulative leaders. Luke’s version of Jesus’ prophecy is intended to guide people towards a more sober faith.

Luke’s purpose in today’s excerpt is to emphasise that God’s Kingdom or Rule is not a matter of the apocalyptic future but a real presence in Jesus’ teaching and healing amongst the marginalised of Israel, and even in his rejection, suffering and death.

Beyond that quiet presence he asserts that the humane kingdom will one day arrive in full, but it will begin with the catastrophic destruction of all, except those who who have been willing to risk their lives for the ‘Son of Man.’

The “eschatology” (teaching about the end-time) , of the New Testament, as we find it in the Gospels, the letters and the Revelation, is not conventionally optimistic. Worldly powers – and Israel has become one of them- are interpreted as demonic opposition to the goodness of God expressed in Jesus. God’s kingdom is already planted on the earth, but is presently small and weak and shares the suffering of Jesus. One day, the judgement of God will be unleashed to destroy all opposition, after which God’s saints can rule the earth.

Only the conviction that the kingdom is amongst us in weakness expresses the creativity of Jesus. The conviction of a future catastrophic judgement on evil expresses the passion of the Hebrew prophets, but is not new. There are hints in the Gospels that these different visions of the kingdom had begun to come together. Jesus’ suffering on the cross is seen by Mark and Marthew certainly as an apocalyptic event. Paul earlier on had grasped that it was God’s weakness in Christ that was the judgement on the world. But it is the subtle and often misunderstood theology of the book of The Revelation which depicts the victorious judgement of God as none other than the suffering of  Jesus and his saints, so that the great dragon of evil is overcome by the Lamb.

Luke’s understanding is mid-way in this process, emphasising the fragile yet indestructible kingdom of God manifested in the faithful communities of Jesus, patiently rejecting all loopy claims about the kingdom’s full arrival, while praying that it will come in Gid’s good time.