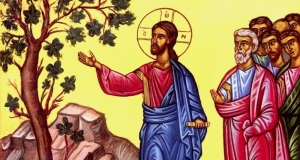 29 Then he told them a parable: “Look at the fig tree, Indeed, all the trees. 30 As soon as they sprout leaves, you can see for yourselves that summer is near. 31 In the same way, when you see these things taking place, you are to know that the Kingdom of God is near! 32 Yes! I tell you that this generation will certainly not pass away before it has all happened. 33 Heaven and earth will pass away, but my words will certainly not pass away.

34 “But keep watch on yourselves, or your hearts will become dulled by carousing, drunkenness and the worries of everyday living, and that Day will be sprung upon you suddenly like a trap! 35 For it will close in on everyone, no matter where they live, throughout the whole world. 36 Stay alert, always praying that you will have the strength to escape all the things that will happen and to stand in the presence of the Son of Man.”

37 Yeshua spent his days at the Temple, teaching; while at night he went out and stayed on the hill called the Mount of Olives. 38 All the people would rise with the dawn to come and hear him at the Temple courts.

Verses 29-33 are Luke’s version of his source material in Mark 13, which he edits in his usual way, whereas verses 34-36 are original to Luke. Although their message is not unusual, the wording is unique in the tradition of the first three gospels.

Firstly then, Luke gives his version of the parable of the fig tree, which is not as detailed in its image of the tree as Mark’s is, but keeps the same progression, that is from spring to summer, which is slightly surprising, as in most of Jesus parables of growing things, the pay -off time is Autumn. Perhaps this parable is simply meant to emphasise the natural progression of the tree to its summer leafage and of God’s Rule from the destruction of Jerusalem and the persecution of disciples, (mentioned in the previous verses) to its final arrival. The point of the parable is that the signs of summer and of the coming of the Rule of God are equally clear.

The promise that “these things” will happen before “this generation” has passed away is found also in Mark and Matthew. Given that by the time all these gospels were written, a fair part of Jesus’ generation would have passed away, it’s interesting that the gospels all quote these words, which they could have altered or omitted. My guess is that the words were widely known amongst believers as the words of Jesus, and were interpreted to mean that the Rule of God in its fullness was to be expected soon, perhaps before the last person alive in Jesus day had died. ( 100 CE?). I have promised that I will deal with the issue of this eschatological expectation in my Friday blog on: xtremejesus.co, but I’ll give a taste of it below.

The other saying of Jesus quoted here emphasises that although profound changes may take place amongst the heavenly powers that rule the world and in the world itself (heaven and earth) the words of Jesus are neither altered nor superseded. This is an interesting claim in that all the gospel writers must have been aware that they were engaged in editing and making helpful changes to, the words of Jesus. They probably saw their own task as empowered by the Spirit to keep Jesus’ words comprehensible to new people.

Luke, who was probably writing around 90 CE, shows an awareness that believers may have stopped expecting the return of Jesus as Son of Man, and he therefore supplies the passage of wise advice in verses 34-36. which is similar to the kind of advice given by Paul in his letters. The last day will come, suddenly and catastrophically, upon all humanity, so believers must be disciplined in their ordinary behaviour. They will need all their wits about them if they are not to lose faith in time of trouble. For them however, the arrival of Jesus as Son of Man, as the ruler of God’s humane kingdom, will be a liberation, not a threat.

The Temple and the Mount of Olives are both associated with the arrival of the Messiah, so Luke’s brief description of Jesus’ presence in these two places has messianic overtones. It also emphasises that the people recognised him and responded to him as their true teacher.

For many people, believers and non-believers, this whole topic is simply a load of gobbledygook that no sensible person should touch with a barge pole, for the only people who relish the teaching about the end times and the return of Jesus are manifest nutters often with a divisive social and political agenda. The whole “rapture” industry is evidence of that.

Certainly if we think of time as a straight line and the Final Rule of God as at the end of that line, the teaching seems to be laughably mistaken. Not only did it not arrive in the time of the first believers, it hasn’t arrived since inspite of the holocaust and the dropping of an atomic bomb. We might be justified in asking what it would take to wake God from his apparent sleep.

But if we could think of time as composed of different sorts of time, from the unimaginable time light takes to arrive from the stars to the all too swift time of our summer holiday; from the time of geologists to the time of sprinters at the Olympic Games; from the time kept by clocks to the time that apparently stands still in a black hole; then we might say that the time of the Rule of God is not in sequence with historical time, but rather aslant it, at an angle to it, so that it impinges of history, as it were from a different dimension.

The gospels point to this mystery when try quote Jesus as insisting that God’s Rule has arrived ( “If by God’s finger I drive out demons then the Rule of God has come upon you”) and also that it is still to come, as in today’s passage. This is not simply a matter of degree, that it has arrived in miniature in Jesus’ ministry but will come more fully later. No, God’s Rule is never partial; when it is present it is fully present; but it is present in two modes: with the consent of human beings, as in the healings of Jesus, and without their consent, as in the promise of the arrival of the Son of Man. We should think of these two modes as simultaneously impinging on historical time. Every day it arrives in those who consent to it; and every day it snaps shut on those who refuse it. Everyday it is heaven for some and hell for others. Everyday it is saving justice for some and retribution for others.

This interpretation is influenced by the Book of The Revelation in the Bible and by St. Augustine who in his “City of God” saw believers as simultaneously citizens of Rome and of the City of God. I’ll deal with this at greater length in my other blog tomorrow.