While he was still speaking, a crowd of people arrived, with the man called Y’hudah (one of the Twelve!) leading them. He came up to Yeshua to kiss him, 48 but Yeshua said to him, “Y’hudah, are you betraying the Son of Man with a kiss?” 49 When his followers saw what was going to happen, they said, “Lord, should we use our swords?” 50 One of them struck at the slave of the head priest and cut off his right ear. 51 But Yeshua answered, “Just let me do this,” and, touching the man’s ear, he healed him.

52 Then Yeshua said to the head cohanim, the officers of the Temple guard and the elders who had come to seize him, “So you came out just as you would to the leader of a rebellion, with swords and clubs? 53 Every day I was there with you in the Temple court, yet you didn’t arrest me. But this is your hour — the hour when darkness rules.”

Again Luke edits his main source, the Gospel of Mark, by omitting the explanation that Judas had set up the kiss as his way of identifying Jesus to the soldiers. Perhaps Luke wanted his readers to feel the full force of the Judas kiss, as an intimate betrayal. He alone gives Jesus the words about betraying the Son of Man with a kiss, which emphasise that it is not merely a personal betrayal but also a betrayal of the representative of God’s humane Rule in the world. The reader is meant to remember that Jesus has come to understand that betrayal, rejection, suffering and death are part of his destiny as Son of Man, they are “his way.” Judas and the religious leaders imagine they are stopping Jesus from completing his mission, when in fact they are assisting it. We may think of this as the savage irony of God, who never intervenes but always knows that the  victories of evil are only apparent. Or we may think of it as St Paul did when he wrote that the weakness of God is stronger than human strength and the daftness of God is wiser that human wisdom. 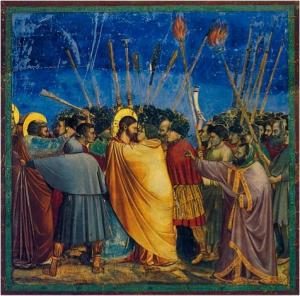 Luke emphasises as do the other gospels the complete self-possession of Jesus in the face of violence. He adds the detail of Jesus’ touching the wounded man’s ear, to heal him. He portrays Jesus’ amused scorn at the over-the-top forcefulness of this arrest, as if he were a Jihadi leader. Luke is concerned as are all the gospels to distinguish Jesus Messiah from other messianic leaders in contemporary Jewish history who led rebellions against Rome. Although his Jesus announces a Rule, it is not one gained or defended by force.

The story Luke found in Mark and other sources, placed responsibility for the death of Jesus on the shoulders of the Jewish religious establishment rather than on the Romans who executed him. We may ask where this information came from seeing that none of his disciples were present at his trial or at the negotiations with the Roman governor. But the gospel record is unanimous that whatever involvement the Roman’s had, the plot against Jesus was the brainchild of the most pious and respectable people in his own nation.

Luke misses out Mark’s statement that all the disciples forsook Jesus and fled, and his subsequent mysterious evidence about the young male disciple who left his cloak in the hands of pursuers and fled naked. All of that, in Luke’s eyes, needlessly reminds people of the cowardice of the disciples. Of course, it’s easy to say cowardice, and to imagine that we might have done better. I can think of some people who might have done better, but for my part, I know I’d have thought, “Another fine mess you’ve got me into here Jesus,” and left him to it.The hour when darkness rules is a bad time for decent people like me!

It is worth comparing the clear-eyed courage of Jesus with the courage of German, French and British troops at the battle of the Somme, which was remembered in the UK yesterday. Even now the leaders of our country cannot acknowledge that all the young men on both sides were deceived about the need for war, because they had been  fed lies by the governments and popular press. Amongst the other qualities on which the warmongers relied, was their passivity. That they would believe and do what they were told without question and kill other young men who had had done them no wrong. Responsibility for the appalling waste of life at the Somme is not limited to those who gave the orders but shared with those who obeyed them. We can call their obedience “courage” if we want, but we should compare it with Jesus’ courage in refusing to use or to permit his followers to use, violence of any kind.

* The images in this blog are details from Giotto’s fresco, The Arrest of Christ.