50 There was a man named Yosef, a member of the Sanhedrin. He was a good man, a tzaddik; 51 and he had not been in agreement with either the Sanhedrin’s motivation or their action. He came from the town of Ramatayim, a town of the Judeans; and he looked forward to the Kingdom of God. 52 This man approached Pilate and asked for Yeshua’s body. 53 He took it down, wrapped it in a linen sheet, and placed it in a tomb cut into the rock, that had never been used.

54 It was Preparation Day, and a Shabbat was about to begin. 55 The women who had come with Yeshua from the Galil followed; they saw the tomb and how his body was placed in it. 56 Then they went back home to prepare spices and ointments.

On Shabbat the women rested, in obedience to the commandment. 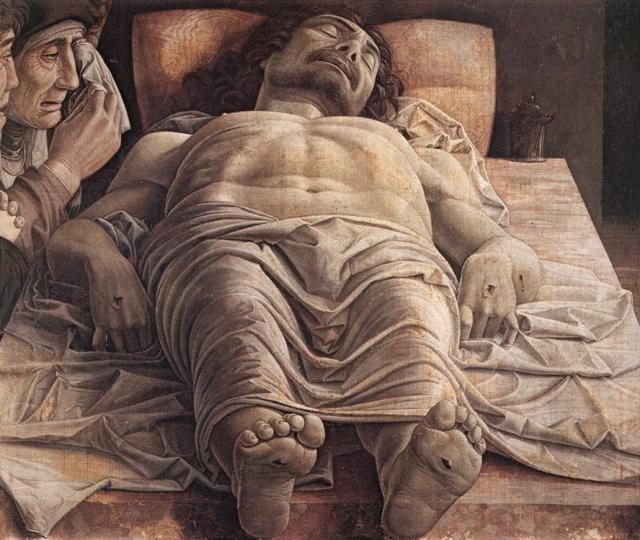 As I’ve noted in previous blogs, the narrative of Jesus’ death is the most detailed in all the Gospels, yet it is impossible to reconcile all the details given in them to produce a common version.

It’s quite reasonable to be suspicious of all the accounts. Luke as always is using Mark as a source, and while sticking more or less to what he is given, he edits it for his own purpose. Mark insists that Pilate was surprised that Jesus was dead and asked for confirmation. Luke omits all of that. Mark reports that a large stone was placed at the mouth of the tomb; Luke omits this also, although he then refers to the stone in his account of the resurrection.

In effect, we should be able to see the elephant in the room, namely, that we would have expected Jesus body to have been claimed by his disciples, which clearly it was not; and instead we are given Joseph of Ramatayim, out of the blue, who has the sympathy and the resources to entomb Jesus’ body. The women who followed Jesus (note that they follow but are not called disciples!) are cited as witnesses. My guess is that the disciples were nowhere near the execution and may have had no idea of what happened to Jesus’ body. That would not in itself been a problem for the Gospel writers, but the story of the resurrection demands a focus on the tomb of Jesus. Luke’s omission of the closing of tomb with a stone is due to his desire that the women should be able to see the body and witness to its presence in the tomb.

The various means by which the gospel writers try to provide evidence of the body in the tomb are evidence that their account of the resurrection was under challenge. These narrative strains and cracks come from the desire of the writers to present a) a convincing historical account and b) a convincing apocalyptic revelation that points to actions of God ( such as resurrection) that go beyond all history. The shifting registers of the gospel accounts are well- managed and should not be a problem to readers other than those who imagine that all biblical narratives are factual history.

I believe that faith in the risen Jesus is the foundation of the church, and I have  personal trust in his living presence, but I suspect that the fate of Jesus’ body and its location were wholly unknown to his first followers. In other words I think the stories of the empty tomb are all accounts of an action of God towards Jesus which is more simply told in the words, “on the third day he was raised from the dead”, and which is in strict terms invisible to human eyes and understanding. How to tell the untellable story? That’s the gap that the first believers filled with the resurrection narratives.

That does not mean that they are “untrue”; indeed they try to capture a deeper reality than factual history. All the more reason then, not to confuse them with it. I hope to explain my interpretation of the resurrection stories of Luke more fully in my next few blogs.