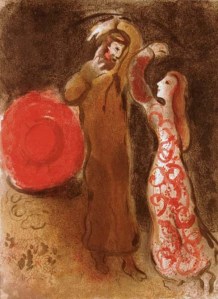 Then Na′omi her mother-in-law said to her, “My daughter, should I not seek a home for you, that it may be well with you? 2 Now is not Bo′az our kinsman, with whose maidens you were? See, he is winnowing barley tonight at the threshing floor. 3 Wash therefore and anoint yourself, and put on your best clothes and go down to the threshing floor; but do not make yourself known to the man until he has finished eating and drinking. 4 But when he lies down, observe the place where he lies; then, go and uncover his feet and lie down; and he will tell you what to do.” 5 And she replied, “All that you say I will do.”

6 So she went down to the threshing floor and did just as her mother-in-law had told her. 7 And when Bo′az had eaten and drunk, and his heart was merry, he went to lie down at the end of the heap of grain. Then she came softly, and uncovered his feet, and lay down. 8 At midnight the man was startled, and turned over, and behold, a woman lay at his feet! 9 He said, “Who are you?” And she answered, “I am Ruth, your maidservant; spread your skirt over your maidservant, for you are next of kin.” 10 And he said, “May you be blessed by the Lord, my daughter; you have made this last kindness greater than the first, in that you have not gone after young men, whether poor or rich. 11 And now, my daughter, do not fear, I will do for you all that you ask, for all my fellow townsmen know that you are a woman of worth. 12 And now it is true that I am a near kinsman, yet there is a kinsman nearer than I. 13 Remain this night, and in the morning, if he will do the part of the next of kin for you, well; let him do it; but if he is not willing to do the part of the next of kin for you, then, as the Lord lives, I will do the part of the next of kin for you. Lie down until the morning.”

14 So she lay at his feet until the morning, but arose before one could recognize another; and he said, “Let it not be known that the woman came to the threshing floor.” 15 And he said, “Bring the mantle you are wearing and hold it out.” So she held it, and he measured out six measures of barley, and laid it upon her; then she went into the city. 16 And when she came to her mother-in-law, she said, “How did you fare, my daughter?” Then she told her all that the man had done for her, 17 saying, “These six measures of barley he gave to me, for he said, ‘You must not go back empty-handed to your mother-in-law.’” 18 She replied, “Wait, my daughter, until you learn how the matter turns out, for the man will not rest, but will settle the matter today.”

In my reading so far I have indicated that the narrative moves on different levels:

It is a story of exodus, with a Jewish woman returning to the promised land. In this chapter we see her planning to settle, with her daughter-in-law.

It is a story of famine and plenty. In this chapter, plenty arrives with the threshing of the harvest grain.

It is story of widowhood. In this chapter, the young widow moves towards a new marriage.

it is story of a new identity, forged out of the recognition of bare human need by Ruth who sticks by Naomi, and which is noted in the story by Hebrew verbs meaning to know and to recognise. In this chapter that new identity is fulfilled in the expectation of marriage. But it is not initiated by negotiation as it could have been, but by the bare human need of sexual encounter, which is marked by the the Hebrew verbs to uncover and to know, both of which are associated with sexual behaviour. As in her response to Naomi, Ruth commits her own womanly soul and body to Boaz, rendering him vulnerable by “uncovering his feet”, which is ambiguous, but given that “feet” is often a euphemism for genitals, it surely means more than a demure posture at the foot end of Boaz’s chosen resting place. Readers are meant to remember that it’s precisely sexual unity of Iraeli men in marriage with foreign women that was forbidden by Ezra’s Torah. For Ezra this kind of activity is the heart of darkness, for the Ruth author it is the heart of humanity.

The chapter begins however with Naomi taking over the initiative from Ruth, who has been feeding them both by her daily gleaning in the fields. The more experienced woman wants Ruth to reap the reward of her faithful love, by finding a secure love of her own. The Hebrew word translated “home” means, rest, settlement, fulfilment, and is often used of unmarried women. Doubtless Naomi knows that she could approach her next of kin on Ruth’s behalf, but because she has learned from Ruth to rely on her basic humanity, she advises Ruth to make an personal and sexual approach to Boaz.

The threshing floor is a common image of sexual activity, with vigorous action freeing the seed. In this place, Ruth “comes softly, and uncovers his feet and lies down.” This is a very gentle seduction, in which she nevertheless makes an unmistakable gesture of sexual availability. But it is more, as she offers herself as a wife to her next of kin, who has a duty to marry her and raise children for his dead relative. When she offers herself she asks him to spread the skirt of his cloak over her, and the word for cloak is literally “wings” the same word used for God’s protecting wings in chapter 2:12.

Boaz shows that he appreciates both the sexual and matrimonial meanings of Ruth’s bold offer. He praises her seductive daring ( your last kindness) as being on the same level as her loyal love for Naomi (the first). The Hebrew word for kindness is “chesed” which means faithful love and is used for God’s Covenant-love to his people. Boaz distinguishes the  mere use of her sexual attractiveness, which might have led her towards younger men, from the offer of herself to Boaz which may ensure a future for Naomi as well as herself. 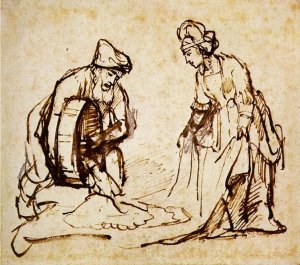 Boaz is revealed as a conscientious man who acknowledges that there is a  closer kinsman than himself whose rights must be respected. He knows therefore that Ruth may not be his wife and is careful of her reputation by getting her away from the threshing floor before she is seen.  But he makes  a significant gesture, by pouring seeds – the sign of harvest, plenty and sex- into her shawl to take home.Ruth shows she understands the meaning of his gesture by telling Naomi it was given so that she should not return,”empty.”

The new human identity discovered by Ruth and Naomi is spread not by teaching or statute, but by resolute, risky, human commitment of body and soul. LIke Naomi, we the readers think that it will work.