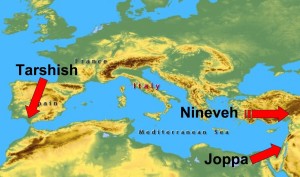 The Lord’s word came to Jonah, Amittai’s son: 2 “Get up and go to Nineveh, that great city, and cry out against it, for their evil has come to my attention.”

3 So Jonah got up—to flee to Tarshish from the Lord! He went down to Joppa and found a ship headed for Tarshish. He paid the fare and went aboard to go with them to Tarshish, away from the Lord. 4 But the Lord hurled a great wind upon the sea, so that there was a great storm on the sea; the ship looked like it might be broken to pieces. 5 The sailors were terrified, and each one cried out to his god. They hurled the cargo that was in the ship into the sea to make it lighter.

Now Jonah had gone down into the hold of the vessel to lie down and was deep in sleep. 6 The ship’s officer came and said to him, “How can you possibly be sleeping so deeply? Get up! Call on your god! Perhaps the god will give some thought to us so that we won’t perish.”

7 Meanwhile, the sailors said to each other, “Come on, let’s cast lots so that we might learn who is to blame for this evil that’s happening to us.” They cast lots, and the lot fell on Jonah. 8 So they said to him, “Tell us, since you’re the cause of this evil happening to us: What do you do and where are you from? What’s your country and of what people are you?”

9 He said to them, “I’m a Hebrew. I worship the Lord, the God of heaven—who made the sea and the dry land.”

10 Then the men were terrified and said to him, “What have you done?” (The men knew that Jonah was fleeing from the Lord, because he had told them.)

11 They said to him, “What will we do about you so that the sea will become calm around us?” (The sea was continuing to rage.)

12 He said to them, “Pick me up and hurl me into the sea! Then the sea will become calm around you. I know it’s my fault that this great storm has come upon you.”

13 The men rowed to reach dry land, but they couldn’t manage it because the sea continued to rage against them. 14 So they called on the Lord, saying, “Please, Lord, don’t let us perish on account of this man’s life, and don’t blame us for innocent blood! You are the Lord: whatever you want, you can do.” 15 Then they picked up Jonah and hurled him into the sea, and the sea ceased its raging. 16 The men worshipped the Lord with a profound reverence; they offered a sacrifice to the Lord and made solemn promises.

17  Meanwhile, the Lord provided a great fish to swallow Jonah. Jonah was in the belly of the fish for three days and three nights. 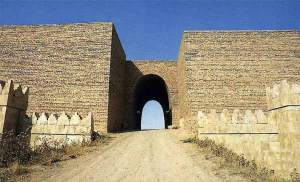 Just as with the book of Ruth, here also we are dealing with the work of a subtle writer with a radical understanding of the Jewish tradition. We can see in this opening chapter how traditional language is used for unexpected purposes. For example the books of the great prophets like Isaiah and Jeremiah include accounts of how the prophet was called by the “Word of the Lord”. So here we have the Lord’s Word arriving and being immediately disobeyed! Here we have a prophet who is distinguished by not wanting to preach God’s word. The author is using the name of a minor prophet who lived in the time of King Jeroboam. Certainly the Lord’s word is itself a bit odd, as it calls for the word to be preached in Niniveh, in the heart of foreign darkness, we might say. Indeed, Niniveh had been the capital of the new- Assyrian Empire of the 8th and 7th centuries BCE, a continual threat to Israel and Judah, but by the time when “Jonah” was probably written, it was no longer the powerful threat it had been. And the Lord speaks as if the long-term violence of the city has only just come to his notice! No wonder the prophet wants to go away from the Lord, as if the Lord only functions in Israel.

Of course because the Lord is the creator, as Jonah admits, he cannot get away from him, but the way the Lord catches him is instructive. It’s as if the Lord were saying, “Well if you won’t have me, the creator who made order out of the great deep, you can see how you like the great deep itself in all its chaotic power!” Jewish readers would remember that the imagery of the great deep had been used by genuine prophets as an image for the violence of great empires, and doubtless tthe great fish that swallows the prophet is a personification of chaotic violence. These images have a connection with Israel/ Judah being “swallowed up” by the Babylonians who carried off the active population as slaves to Babylon. Perhaps this author is scandalous enough to make Jonah a stand-in for the terrible fate of his people. If so, he’d be interpreting the exile of his people as a punishment for not having carried God’s message to their enemies!

We should note that the sailors are shown as decent people who don’t want to play the part of killers, and that Jonah succeeds by his “death” in the sea, in making them turn to God although that is not his intention. 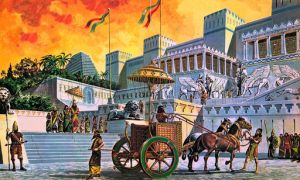 The Great City of Nineveh

It’s difficult to get a sense of the outrageous idea that the prophet should preach to Niniveh. Yesterday a candidate for the leadership of the U.K. Labour Party suggested that we should talk to the representatives of so-called Islamic State arousing predictable howls of outrage from the popular press.Talk to these murdering swine, indeed! We should be talking only of exterminating them! In fact killing’s too good for them, they should be gassed, raped, tortured and left to die in pain, mocked by selected members of UKIP and the English Defence League. Yep, that’s the sort of feeling Jewish people had towards Nineveh and the foreign powers symbolised by that name.

That kind of outrage rests on the popularity of imitative violence, ignoring the fact that strike first, talk later, is the motto of our enemy, and that talk first, strike as a last option, might be ours.  The story of Jonah suggests that honest speech might be God’s preference also. As readers of my other blog, xtremejesus.co will know, I favour the Christian Church initiating talks with Islamic State.