So am I saying that we should keep on sinning so that God’s favour may increase?

Certainly not! If we’ve “died” to sin, how can we still live in it?

Don’t you know that all of us who have been baptised into Messiah Jesus were baptised into his death? We were buried with him by our baptism into death, so that, just as Messiah was raised from the dead by the Father’s glory, we too might walk in a life made new.For if we have planted with him in a death like his, we shall surely grow with him in a resurrection like his.

We know this: that our old self was crucified with him in order that our sinful identity might be annulled and we would be slaves of sin no longer.For when you’re dead, you’re cured of sin. Now if we are dead with Messiah, we trust that we will also live with him. Now raised from the dead, Messiah dies no more, for death has no dominion over him. In his death he died to sin once and for all, but in his life he is alive to God. Think of yourselves too in this way, as dead to sin and alive to God through Messiah Jesus.

In this chapter, Paul begins to flesh out the way in which Jesus death on the execution stake transforms the life of believers. We already know that he thinks of it as God’s way of buying humanity back from the powers of sin and death.This exodus is not achieved by the blood of a lamb but by the bloodysacrifice of Jesus in faithfulness to God’s goodness. Again he has told his audience that the crucified Jesus has been put there by God as the locus of his saving justice. Here Paul begins to spell out how this apparent defeat, the death of the Messiah, changes believers from sinners into just people.

The key to Paul’s thinking is the manner in which believers share the life of Jesus: the relationship rests on their response to the joyful news of God’s goodness in Jesus. This response is trust, which is confirmed by their willingness to become fully united with Jesus and with his Assembly. For Paul, baptism is the effective sign of this unity, first of all with Jesus’ death, then with his risen life. He interprets this as the death of the old person and the birth of the new. 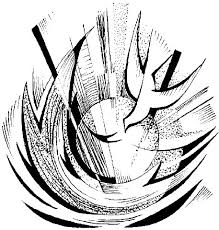 The old person is enslaved by the power of sin, which is an arrogant rejection of the Creator God in favour of worldly things and powers, which then hold sway over human beings. Paul therefore states boldly that people have to “die” to the power of sin. But this involves him in saying that Jesus their exemplar also “died to sin once and for all”, which may have sounded puzzling to his audience – for wasn’t Jesus sinless?

The phrase has at least two meanings:

Baptism means the complete identification of the believer with Jesus in his dying, namely the surrender of the old arrogant identity and its ways and a readiness to suffer with Jesus in the weakness of God.

Although Paul does not emphasise it here,  we should note that although the individual believer must gladly accept this baptism, it is a corporate action of the whole Assembly of Jesus; and that the process of dying to the old and being born as new is also corporate, shared over time, with brothers and sisters, in a shared enterprise. The believer is not alone in the process of transformation, which is not magical. Although he/she is baptised into the death of Jesus, their old identity is not automatically annulled not their new idenity automatically assumed. It takes time and effort. But throughout believers can draw strength from Messiah Jesus who is completely alive to God. The powers of sin and death have no dominion over him, nor over the beleivers who share his life.