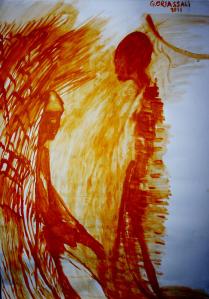 18 Now the birth of Jesus the Messiah took place in this way. When his mother Mary had been engaged to Joseph, but before they lived together, she was found to be with child from the Holy Spirit. 19 Her husband Joseph, being a righteous man and unwilling to expose her to public disgrace, planned to dismiss her quietly. 20 But just when he had resolved to do this, an angel of the Lord appeared to him in a dream and said, ‘Joseph, son of David, do not be afraid to take Mary as your wife, for the child conceived in her is from the Holy Spirit. 21 She will bear a son, and you are to name him Jesus, for he will save his people from their sins.’ 22 All this took place to fulfil what had been spoken by the Lord through the prophet:

23 ‘Pay heed!  The virgin shall conceive and bear a son,
and they shall name him Emmanuel’,
which means, ‘God is with us.’

24 When Joseph awoke from sleep, he did as the angel of the Lord commanded him; he took her as his wife, 25 but had no marital relations with her until she had borne a son; and he named him Jesus.

In the quotation from Isaiah the Greek version has “parthenos”, maiden, virgin, while the original Hebrew has “alma”, young woman. Obviously the text has been moved in the direction of miraculous birth, but it is unclear whether this is the work of Jewish messianic interpreters, or the early Christian tradition, or of Matthew. Ceratinly he is committed to the story of Jesus’ birth as a miracle, even more than Luke who never explicitly rules out marital sex between Mary and Joseph as Matthew does in verse 25 above. 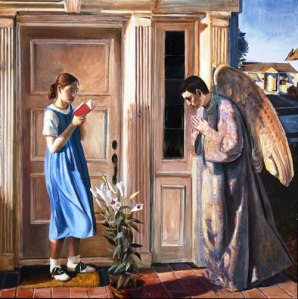 If we ask the  obvious question, ” Did this happen as narrated?”  The answer is surely, “No, it did not.” At least, it could not, if we hold a solely secular and scientific view of what happens. This is an imporatnt view, which cannot simply be sidelined but we have to reckon with the stubborn fact that Matthew says it happened this way. Of course he is a storyteller, who expects his readers to find truth in the story as it is told, and not in “facts”, abstracted from it. One way of catching his meaning is to ask how we would tell the story of Jesus’ birth.

Would we just talk about Jesus as the child of Mary and Joseph? I think that would be our starting point. But if we wanted to tell the deeper story of how Jesus came to be the person he was, we would have to look at two areas of causation: genetic and educational, nature and nurture. With nature, we would have to deal with elements of chance as regards the moment of conception and the precise mixture of male and female elements in his DNA, as well as elements that are totally determined by the processes of  conception and foetal development. With nurture, we would take into account the nine months of foetal life, especially in relation to the overall health of the mother, as well as the parental and communal nurture, in its physical, mental and spiritual dimensions, given to the child. Such nurture is very hard to quantify. We might end up thinking we knew a little about how Jesus came to be Jesus, but we would have to admit that if we had been given all the relevant data in advance we could never have predicted Jesus. There are random elements in the processses of conception, birth and maturation which mean that the human being in its uniqueness cannot be predicted.

Matthew, lacking our science, but aware of the various influences on human character and destiny, chooses carefully how he will describe waht he calls the “genesis”, that is, the coming-into-being of Jesus. The use of this Greek word which is also used as a title for the first book of the Torah, which tells of the origin of the world and of Israel, signals that Matthew may be thinking of this birth as a new era in the life of the world. The human genetic evidence about Jesus has been been presented in the genealogy which precedes this section of the gospel. It has ended ironically with the refusal to state that Joseph was the father of Jesus, although logic suggests that of course he was. Here Matthew explains how the human parents of Jesus are not the only “cause” of his existence, but that a specific act of divine creation has sidelined the male contribution, bringing into the world a new being. Joseph remains important in his acceptance of this difficult role. He does not insist on his patriarchal or marital rights, but allows the initiative of God and protects his wife and child. 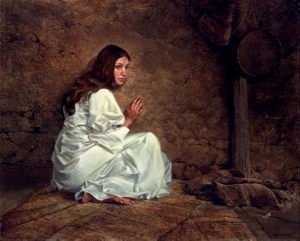 Clearly, this is a fundamental rejection of patriarchy. The Messiah of Israel, the son of God, is not a product of the normal sexual roles prescribed in Israel’s culture. The male is not priveleged over the female but serves her and their child, for Jesus is truly Joseph’s child as well as Mary’s through his choice to accept his wife and adopt his child.

Miraculous birth is part of Israel’s story, for example, in the case of Isaac born to parents who are past the years of conception and giving birth.Matthew’s story is within that tradition, but is more radical in its involvement of God’s Spirit in the processs of conception. It points to Jesus as a unique creation of God. Christian doctrine insists that Jesus is not a creature at all but the eternal Son of God.  Matthew knows nothing of that, and is clearly describing a creative act of God which requires human assistance. Jesus is for him a unique creature, a human being in whom and through whom God dwells with his people.