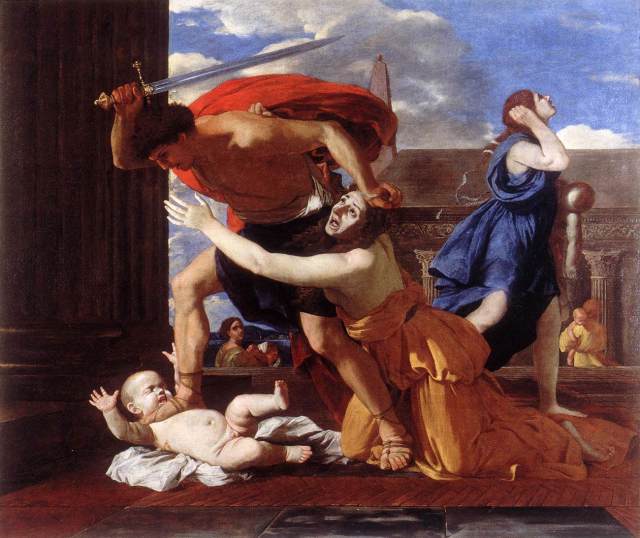 13 When the magi had departed, an angel from the Lord appeared to Joseph in a dream and said, “Get up. Take the child and his mother and escape to Egypt. Stay there until I tell you, for Herod will soon search for the child in order to kill him.” 14 Joseph got up and, during the night, took the child and his mother to Egypt. 15 He stayed there until Herod died. This fulfilled what the Lord had spoken through the prophet: I have called my son out of Egypt.
16 When Herod knew the magi had fooled him, he grew very angry. He sent soldiers to kill all the children in Bethlehem and in all the surrounding territory who were two years old and younger, according to the time that he had learned from the magi. 17 This fulfilled the word spoken through Jeremiah the prophet:

18 A voice was heard in Ramah,
weeping and much grieving.
Rachel weeping for her children,
and she did not want to be comforted,
because they were no more.

19 After King Herod died, an angel from the Lord appeared in a dream to Joseph in Egypt. 20 “Get up,” the angel said, “and take the child and his mother and go to the land of Israel. Those who were trying to kill the child are dead.” 21 Joseph got up, took the child and his mother, and went to the land of Israel. 22 But when he heard that Archelaus ruled over Judea in place of his father Herod, Joseph was afraid to go there. Having been warned in a dream, he went to the area of Galilee. 23 He settled in a city called Nazareth so that what was spoken through the prophets might be fulfilled: He will be called a Nazarene.

Matthew has already emphasised Jesus connection with Abraham and King David, now he points up his connection with Moses, Jeremiah and the whole people of Israel. As a refugee in Egypt Jesus shares in the exodus mentioned by Hosea, “I have called my son (Israel) out of Egypt.” The killing of the boys reminds the alert reader of Pharaoh’s massacre of Israelite boys, from which Moses escaped. The quotation about Rachel weeping comes from Jeremiah and refers to the defeat of Israel by the Assyrians, which led to exile in Babylon. The return to Israel links Jesus to the Israelites who returned from exile. It’s impossible to tell what sources Matthew had for these stories, which seem legendary in nature.

There is no confirmatory evidence of the crime attributed to Herod the Great, who was not noted for his strict adherence to just rule, but was certainly not known as a child murderer. This illustrates a dilemma about what we might call “theological storytelling” which may seem a harmless and even useful aspect of biblical narrative, but if it invents massacres and casts blame on historical persons, may be unfair and damgerous. Matthew’s almost certainly unhistorical assertion that the Jewish crowd shouted to Pilate, “His blood be on us and on our children” had appalling consequences in Christian persecution of Jews. A well- known biblical commentary, the New Jerome, blythly comments that although there is no evidence for the alleged massacre “it is not out of character”. You just hope that the writer doesn’t work for the police.

I think Matthew wants to show that as a child Jesus Messiah recapitulated the historical suffering of his people, as a prelude to his more profound sharing of it in his death and victorious resurrection: the Messiah is the embodiment of his people’s experience under God. Matthew’s frequent notes that this or that event in Jesus’ life happened so that a prophetic word might be fulfilled demonstrates his eagerness to identify the life of Jesus with the life of Israel. Although from the start Matthew shows that the message of Jesus is destined for the Gentiles, Jesus himself is completely Jewish, the authentic Messiah of his people. 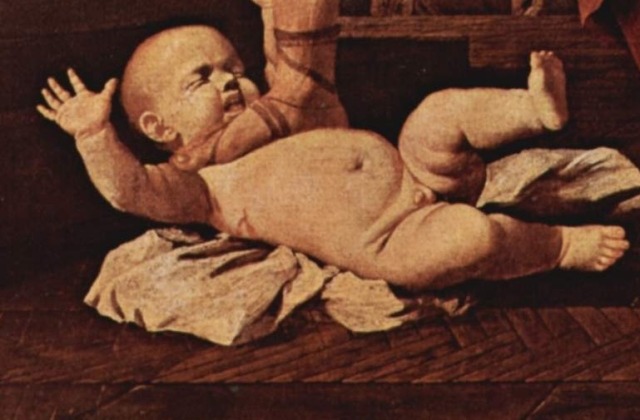 The repeated angelic visits along with the fulfilments of prophecy place this whole sequence of events in God’s hands, who directs and protects the life of his son.

I occasionally wonder if Luke’s picture of one family’s fierce messianic expectation, along with Matthew’s story of swift royal action against such a family, may not indicate a more “political” origin for Jesus than we are accistomed to imagine. The story of the massacre reminds the reader that the Jesus loved in the same world as we do, with its massacre of children in Aleppo.