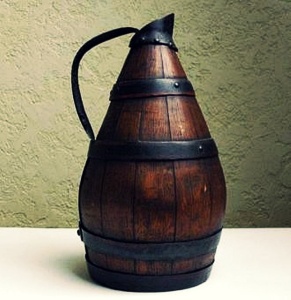 And on the third day there was a wedding at Cana in Galilee and Jesus mother was there. Jesus and his disciples were also bidden to the wedding.

When the wine ran out, Jesus’ mother said to him, “They have no wine.”

And Jesus said to her, “Woman, why are you bothering me?  My hour has  not yet come.”

His mother said to the servants, “Whatever he tells you, do it!”

Now there were six stone water jars there for the purifications of the Judaioi, each holding 20 or 30 gallons. Jesus told the servants, “Fill the jars with water.” And they filled them to the brim. And he told them, “Now draw some off and take it to the Master of Ceremonies” And they took it.

When the Master of Ceremonies tasted the water now become wine, not knowing where it was from, although the servants who had drawn the water knew, he called the Bridegroom and said to him, ” Most people serve the good wine first, then when people are tipsy, the poor wine; but you have held back the good wine until now!”

Jesus did this, the first of his signs, at Cana in Galilee, and  showed his splendour openly. And his disciples put their trust in him.”

The reader should be alerted by the phrase, “on the third day” to guess that the author  is playing with the thought of Jesus’ death and resurrection. This is the third day of Jesus’ ministry, the first two being used for the gathering of disciples, drawn to him because he is identified as the “the lamb of God,” the servant of God who is led to the slaughterhouse. He is the one who while still on earth,”stays with God.” He is the Humane Ruler promised by Daniel, who is the link between earth and heaven.

Now on the third day, the day of resurrection, we are told there is a wedding. The clued – up readers pick up this reference to the Messiah’s  victory banquet, called in the book of the The Revelation, “the wedding feast of the Lamb.” Jesus’ mother, who has a special place in John’s Gospel, as the mother of the Messiah and of the Messianic people, plays the role here of the wise woman who knows the secret truth.

We are also meant to pick up the clue given in the story that the Judaic people have run out of wine. It is near the end of their religion which has run out of juice; their kind of purification is mere water. I might have been better to translate as the KJV does, that the jars hold “2 or 3 firkins”, as the numbers have meaning. If the 3rd day is the day of perfection then these fall short. True Jesus denies that his hour has come, roughly addressing his mother as “woman” as he also does frrom the cross, but she knows that he will indeed give a sign of what is to come, however bizarre his commands may appear at first.

As in the Gospel of Mark, here also Jesus is never other than the crucified and risen One. From the start he is what he shows himself to be in his dying amd rising. Here he reveals that he is the Messiah, God’s anointed, the true  Bridegroom of Israel who brings the glorious wine of new life.

The image of the water jars picks up John the Baptist’s admission that he baptises merely with water, while also categorising Judaism as a ritual religion. Now Jesus has come to offer life, eternal life, which is the best wine which God has laid up until this time. There is great theological wit in this story which mingles the profound truth of Jesus’ gift of eternal life with the story of a village wedding. The author is not all that interested in the village wedding but he uses its details convincingly to display Jesus’ offer of life in relation to the faith of Israel. It should have been the culmination of Israel’s history,  but because of their rejection of Jesus, their faith must be depicted as a poor second best compared with his. The readers are made aware that the story they are following is about the good wine which God has held back until the time of Jesus and is now available to them.