I am continuing my translation of John’s Gospel with comment.

This was the reason that the Judaeans were trying all the more to kill him: not only was he breaking the Sabbath, but he was even calling God his own father, making himself equal to God.  Jesus answered them by saying, “Amen, amen I tell you, the son can do nothing by himself but only what he sees the father doing. Whatever the father does, the son does likewise. For the father loves the son and shows  him everything he does; and he will show him greater works than these, so that you will be astonished. For just as the father raises the dead and enlivens them, so the son enlivens whom he wishes. Neither does the father judge anyone but has given all judgement to the son, so that all people may honour the son as they honour the father. Whoever does not honour the son does not honour the father who sent him.”

“Amen, amen I tell you, whoever hears my word and puts her trust in the one who sent me has the life of the age to come. She does not come into judgement but has stepped out of death into life.”

I have deliberately avoided capitalising “father” and “son” so that they may not seem to be the terms of trinitarian theology but retain some of the metaphorical force they doubtless had in Jesus’ speech. Jesus is comparing his relationship with God to the familial relationship of father and son in his society. A son might commonly learn his trade from his father and ultimately take over the family business. The other Gospels hint that this was the case with Jesus and his father Joseph. Although the Gospel of John emphasises the unique relationship of Jesus and God, it uses a homely metaphor to communicate this teaching.

In this instance, the words given to Jesus initially state the son’s dependence on the father and his complete obedience: he watches the father and copies his way of working. But it goes on to depict the father’s love for the son, and his readiness to teach him even greater skills, so that people may honour his son. All of this springs naturally enough from the metaphor of father and son in a family business. It rests on the conviction that Jesus was uniquely able to “see” what God was doing. This is indeed a mystery. People who believe in God sometimes have a dim idea about what God is doing and in a blundering manner try to act according to their vision. The Jesus of this Gospel seems to have little doubt about Goid’s way of working and complete confidence in his own ability to reproduce it.

The metaphor takes a leap into the unknown when God’s fundamental working skill is exposed: he raises the dead and enlivens them. Jewish theology saw this as God’s ultimate act of creation and judgement. The dead would be called back to life and judgement. Here we are told that the father has resigned this role and handed it over to the son, who has the right to confer on people the life of the age to come. Nevertheless the son is still the one who is sent and the father the one who sends. The aim of the son’s work is that people should trust the father. Putting trust in the father because of the work of the son, takes place in the ordinary life of people in this world; but it is what theologians call an “eschatological” commitment because it lets a person here and now step into the Age to Come, that is, out of death into life. For the author of John’s Gospel trust in Jesus and God is a transformative response made possible by the ministry of Jesus. He has a lot more to tell his readers about the nature of the ministry and the response but he shows here that both are enabled by the relationship of son and father. 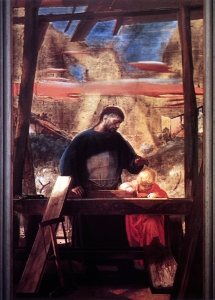 When reading this Gospel it is essential to throw away our knowledge of trinitarian theology, which is like the answers at the back of the book, and work patiently with the puzzles which the author presents in vivid common language.