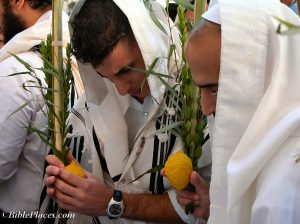 The Pharisees heard the crowd muttering this stuff about Jesus; so the chief priests and the Pharisees sent bailiffs to arrest him. So Jesus said, “I am with you only a little while longer, then I’m going to the one who sent me. You’ll come looking for me and you won’t find me; you can’t come where I am.”

The Judeans said to one another, “Where  does this fellow plan to go that we won’t find him? Maybe he’ll go to the Judeans who live amongst the Greeks- and teach the Greeks! What sort of language is it to say, ‘You’ll come looking for me and you won’t find me,’ and ‘you can’t come where I am?'”

On the last day of the Festival, the big day, Jesus stood and cried out, “If anyone is thirsty, let her come to me and drink, if she puts her trust in me. As Scripture says, ‘rivers of living water will flow from his belly.'” (He said this about the Spirit, which those who put trust in him would receive, but the Spirit was not there yet, as Jesus was not yet glorified.)

Hearing these words, some of the people said, “This man really is The Prophet!”

Others said, “He is the Messiah!”

But some said, “A Messiah who comes from Galilee? Surely not. Hasn’t Scripture said that the Messiah comes from the ‘seed of David’ and from ‘Bethlehem’ the village where David lived?”

So there was a division amongst the crowd over him. Some of them wanted to arrest him but no one laid hands on him.

The bailiffs came back to the chief priests and the Pharisees, who asked them, “Why did you not bring him in?”

The bailiffs answered, “No one else ever spoke like this man!”

The Pharisees retorted, “You’ve been led astray too, haven’t you? Have any of our leaders or of the Pharisees put their trust in him? But this crowd who’re ignorant of the Law are under a curse!”

Nicodemus who had come to Jesus before, and was one of them, said to them, “Does our Law condemn a man without first hearing him and knowing what he is doing?”

They retorted, “Maybe you’re from Galilee too? Search the Scripture and see that no prophet arises from Galilee.” 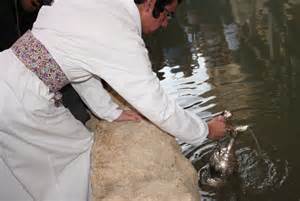 This passage continues the argument about Jesus’ origins. The Judeans who represent also the orthodox Judaism of the author’s time, think they know his family and place of birth. They also imagine that he can be found, arrested and judged like any other human being. Jesus’ answers deny any agency to his enemies: “he” will not be found because he shares the “I am” of God. He will go to God when he chooses, when his “hour” comes.

The reader is meant to see that this language is a theology of the crucifixion. Of course, people will be able to lay hands on Jesus and put him on an execution stake – but only because he allows that to happen; and even then “he” will not be held by his enemies. In fact they will have been lured into assisting the revelation of his true glory in his death.

On the final day of the festival of Succoth the priests poured out water taken from the pool of Siloam, in front of the worshippers who carried signs of harvest.( see images) Doubtless the gospel author saw the water as a sign of life and fruitfulness as well as a reminder of the water from the rock in the desert. The festival was both a harvest celebration and a reliving of Israel’s time in the desert. I have chosen to attach the phrase “one who puts trust in me” to the “one who is thirsty” rather than to the following sentence as most translations do. The “living water” therefore flows from Jesus (literally from his belly in the case of this gospel’s account of the crucifixion) as a sign of the fruitfulness of God’s life which like the water in the desert, issues from a hard place.

It is unclear where we are to find the Scripture to which the author appeals, possibly from Ezekiel’s image of the water flowing from the temple (Ezekiel 47), but in any case the author wants his readers to see them as a reference to the gift of the Spirit through Jesus’ death and return to the father.

The controversy about Jesus’ origins is renewed with a contemptuous focus on Galilee as a place that does not figure in any prophecy of the Messiah, although by the time of this Gospel, believers had identified Isaiah 9:1 as designating Galilee as the place where the people who walked in darkness would see a great light. Ironically the sceptical critics mention Bethlehem as the true birthplace of the Messiah. This is the only evidence in this Gospel of the author’s knowledge of the birth stories which we find in Matthew and Luke. In the same spirit of irony the bailiffs sent to arrest Jesus pay tribute to the power of his teaching.

The intervention of Nicodemus is intended to reveal an even darker irony: the Pharisees who accuse the crowd of being accursed because the ignore the Law are shown to be themselves accursed for their own deliberate setting aside of the Law. They are acting, as Jesus will make explicit, in the power of the Evil One.

If we assume that the readers of this gospel also had access to the kind of material about Jesus in the other gospels, then we can see that this gospel is relying on that characterisation of Jesus, and applying his language of “I am” to the Jesus revealed there. That would make sense. But if we take this gospel on its own we are faced with a Jesus who does little other than talk about himself and his death, in which case we may end up sympathising with the Pharisees or the crowd. I think this is a real issue about John’s Gospel: its portrait of Jesus in itself is not attractive – except to believers who feel under  pressure about their trust in Jesus. They may be comforted by the assurance that Jesus is a manifestation of God.

But others may be repelled by one who points so exclusively to himself. Yes,  he points also to his death as an expression of God’s love; but if we don’t like him, can we see his death in that light? I know these are not the usual kind of Christian comments on the Gospel, but maybe my readers can put me right.