Then the Judaeans, because it was the day of preparation for the Passover and so that the bodies would not remain on the cross on the Sabbath (that Sabbath being a special day), asked Pilate that their legs might be broken and the bodies taken away. So the soldiers came and broke the legs of the first man and of the other who had been crucified with him. Bu when they came to Jesus and saw that he was already dead, they did not break his legs. Instead one of the soldiers pierces his side and immediately blood and water came out.

The one who saw it has given evidence, and his evidence is true; he knows he is telling what really happened, so that you also may have faith.

Indeed these things happened to fulfill the scripture, “Not one of his bones will be broken;” and again another writing says, “They shall look at the one they have pierced.” 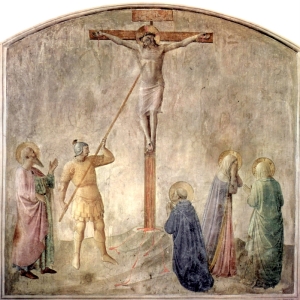 The author supposes that the readers are familiar with crucifixions and know that its victims could survive by bracing themselves on the cross at the cost of terrible pain, until they had no strength to do so and suffocated. The neutral way in which the author writes of breaking legs, without mentioning their owners, carries overtones of the brutality of the punishment.

The piercing of a victim may have been a common enough way of assuring death, but in this case the blood and water probably have theological significance. The first Letter of John describes Jesus as the one who came by water and blood, that is the water of his own baptism in which he received the holy spirit, and the blood of his human death. That text goes on to emphasise that forgetting the blood (Jesus humanity) in favour of the water (God’s spirit) is not true teaching. This was doubtless in the mind of the gospel author who wanted to authenticate this tradition about Jesus’ body, handed down by a witness.

The scripture quotations cited in this passage are important. The first is found in Exodus 12: 46 “its bones shall not be broken” referring to the Passover lamb. This gospel in the only one to identify Jesus as the “Lamb of God who takes away the world’s sin” and it has also aligned the crucifixion with the Day of Preparation for Passover. Now the Passover lamb had no association with sin, but is the sacrifice which “marks out” God’s people as ready to go from the place of slavery into freedom. Jesus’ sacrifice allows his people to go free.

The words are also found in the alphabetical Psalm 34:

Quick to the side of the broken – hearted
The Lord helps those whose spirit is crushed.
Real evils afflict just people
But in all cases the Lord rescues them.
Surely He keeps their bones from harm,
Not one of them is broken.

This expresses the familiar theme of the just person persecuted by wrongdoers finding protection from God, which also fits the author’s picture of Jesus.

The second quotation uses a version of Zechariah 12:10 which seems to say that Israel has “pierced” the Lord, perhaps in the sense of grieving God. A better version of the text clearly refers to a human being who has been pierced. But the Gospel author is using the text to describe those who have pierced Jesus, the son of God. In Zechariah, the “looking”  brings mourning and repentance. In the book of Revelation the same text is used to describe Jesus coming as judge and being recognised by the tribes of earth as the one whom they have pierced. They “mourn” out of fear of judgement. It’s hard to know exactly the sense in which the prophecy of piercing is used here, but certainly the catastrophic nature of Jesus’ death is indicated.

The importance of the meditation of the first Christians on the Jewish scriptures is easily missed by the modern reader. As they identified models for Jesus and prophecies in the scriptures of the events of his life and death, their understanding of him was enriched, sometimes to the extent of importing details from these scriptures into their story of Jesus. They were of course reflecting on scriptures which would also have been very familiar to Jesus himself. The story of Jesus is in constant dialogue with the story of Israel.