This blog continues a commentary on the KJV of Hebrews

Then verily the first covenant had also ordinances of divine service, and a worldly sanctuary.

2 For there was a tabernacle made; the first, wherein was the candlestick, and the table, and the shewbread; which is called the sanctuary.

3 And after the second veil, the tabernacle which is called the Holiest of all;

5 And over it the cherubims of glory shadowing the mercyseat; of which we cannot now speak particularly

6 Now when these things were thus ordained, the priests went always into the first tabernacle, accomplishing the service of God.

7 But into the second went the high priest alone once every year, not without blood, which he offered for himself, and for the errors of the people:

8 The Holy Ghost this signifying, that the way into the holiest of all was not yet made manifest, while as the first tabernacle was yet standing:

9 Which was a figure for the time then present, in which were offered both gifts and sacrifices, that could not make him that did the service perfect, as pertaining to the conscience;

10 Which stood only in meats and drinks, and divers washings, and carnal ordinances, imposed on them until the time of reformation.

11 But Christ being come an high priest of good things to come, by a greater and more perfect tabernacle, not made with hands, that is to say, not of this building;

12 Neither by the blood of goats and calves, but by his own blood he entered in once into the holy place, having obtained eternal redemption for us.

13 For if the blood of bulls and of goats, and the ashes of an heifer sprinkling the unclean, sanctifieth to the purifying of the flesh:

14 How much more shall the blood of Christ, who through the eternal Spirit offered himself without spot to God, purge your conscience from dead works to serve the living God?

15 And for this cause he is the mediator of the new testament, that by means of death, for the redemption of the transgressions that were under the first testament, they which are called might receive the promise of eternal inheritance.

16 For where a testament is, there must also of necessity be the death of the testator.

17 For a testament is of force after men are dead: otherwise it is of no strength at all while the testator liveth.

18 Whereupon neither the first testament was dedicated without blood.

19 For when Moses had spoken every precept to all the people according to the law, he took the blood of calves and of goats, with water, and scarlet wool, and hyssop, and sprinkled both the book, and all the people,

20 Saying, This is the blood of the testament which God hath enjoined unto you.

21 Moreover he sprinkled with blood both the tabernacle, and all the vessels of the ministry.

22 And almost all things are by the law purged with blood; and without shedding of blood is no remission.

23 It was therefore necessary that the patterns of things in the heavens should be purified with these; but the heavenly things themselves with better sacrifices than these.

24 For Christ is not entered into the holy places made with hands, which are the figures of the true; but into heaven itself, now to appear in the presence of God for us:

25 Nor yet that he should offer himself often, as the high priest entereth into the holy place every year with blood of others;

26 For then must he often have suffered since the foundation of the world: but now once in the end of the world hath he appeared to put away sin by the sacrifice of himself.

27 And as it is appointed unto men once to die, but after this the judgment:

28 So Christ was once offered to bear the sins of many; and unto them that look for him shall he appear the second time without sin unto salvation. 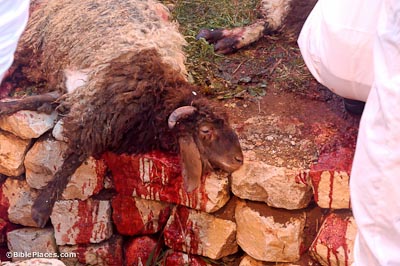 In this section the author compares the sacrifice of Jesus with the those of the Jewish Torah, especially those of Yom Kippur, the day of atonement. This is not only a way of providing a useful metaphor for the deliverance brought by Jesus but also an interpretation of the Jewish temple ritual as embodying genuine human needs which however were not fully met by that provision.

The author pictures the tent/ temple as divided into the holy place and the holy of holies, both of which are entered through a curtain. The vocabulary used by the author is not always consistent and some of the details of the description disagree with the account in Exodus. Only the division into holy and very holy is of vital importance to the author’s argument. The word tabernacle used in the kjv for tent had become fixed in the vocabulary of the time as meaning a religious edifice, but tent is the plainer translation.

The high priest went into the holy of holies a) once every year b) taking animal blood with him c) which he “offered” to God for the “errors” that is, the ritual defilements of himself and the people. In fact the Yom Kippur sacrifice was made for deliberate sins as well. The author notes that in their own day these ceremonies were unable to offer the people access to God or to make the worshippers “perfect in their conscience” because they were outward matters rather than the inward trust made possible through Jesus. For the people, there was no “way into the holiest place” that is, into God, under the old dispensation.

Now Christ has come as the “high priest of a new order” and has passed through the “greater and more perfect tent” into the holy place. This tent is defined as not of this created world, not made by hands. No details are given so we must interpret this as meaning “the heavens, the sphere of God’s presence”. The author means that Jesus has done this in his death and resurrection. He has gained  “eternal redemption”, the kjv adds “for us” but maybe the author meant his own eternal redemption (his being-bought-back) from death, which he then offers to his people. And he done this “by his own blood”, that is by his faithfulness to God unto death.

The blood of the sacrificial animal was did not indicate the necessary cost of redemption but rather the complete offering of life to God, which brought about expiation of sin. The objective action made visible the sincere devotion of the worshipper. Christ’s blood however is itself a willing offer of life to God, in his earthly ministry and his suffering. He has made on behalf of humanity the definitive sacrifice of his own life, once and for all. This too is an objective action, which does perfectly what the believers can only do imperfectly, and draws them into a greater offering than their own, cleaning their consciences from all idolatry and enabling them to serve the one true God.

The author goes on the state that in this way Christ has become the mediator of a “new covenant.” (see my note on mesites = mediator in my last blog). He thinks that “sin” is defined by the old covenant and forgiven by the new. Those who are “called”, that is, summoned by God through Christ to form the new assembly of his people, are given a promise, like that of the land under the old covenant, but this is an eternal inheritance, further defined in chapter 11 as the city of God.

He then exploits the Greek word diatheke, which can mean covenant or “last will and testament.” A will is only active after the death of the testator. The death of animals marked the first covenant and their blood was sprinkled over the holy vessels and the tent itself. The rule is that without blood there is no forgiveness of sin. The new covenant requires the death of Christ (his blood) , his perfect offering, to which believers attach themselves, trusting in the one who has entered God’s presence on their behalf. He does not repeat his self-sacrifice which stands as an unrepeatable act of love for God and humanity, ending the old age of the world and ushering in the new. Just as human death brings in the judgement on that human life so Christ’s death will bring in the final judgement on this age.

This is a complex section of argument, which however puts forward the simple claim that the loving life and death of Jesus have taken the place of all ritual religion. There is now no place for rituals that bring people to God: God himself has established through Jesus a way into his presence by faith.