I think that in the course of blogging I have somehow omitted to examine the First Letter of Peter, although I enjoy reading it. For my next project on this site I’m going to translate it from Greek and provide an informal commentary.

It claims to have been written by “Petros, an Emissary of Jesus Messiah.” If this is Simon Peter, it places the letter not later than 65 CE, the probable date of his death in Rome. That is possible, although scholars suggest that the sophisticated Greek sentence structure would be unlikely for a Galilean fisherman. This is of course mere prejudice as it would also be unlikely for a Galilean fisherman to be head of an international organisation with a Roman HQ. More to the point perhaps is the fact that letter contains no quotation from or memory of Jesus such as might be expected from one of his companions.

It is perhaps more likely that the author is writing in the name of the great disciple towards the end of the first century CE during the “Domitian” persecution of Christians. The provinces mentioned take up most of what we would call Asia Minor. 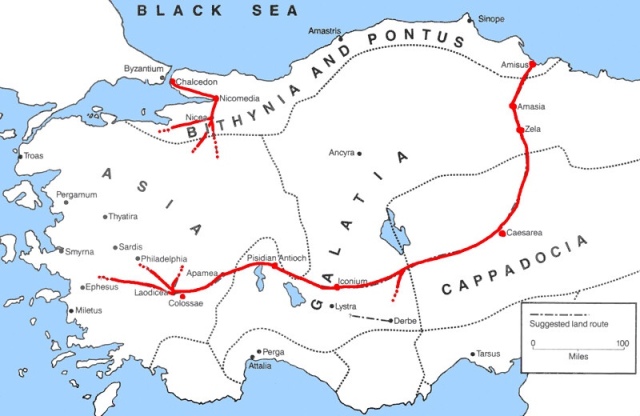 These and other alternatives of date and author, I will examine in the course of translation and commentary.

From Peter, an emissary of Jesus Messiah, to the exiles of the Jewish diaspora in Pontus, Galatia, Cappadocia, Asia and Bithynia, picked out by the foreknowledge of God the father and made holy in spirit, to be obedient to Jesus Messiah and to be sprinkled with his blood; may kindness and peace be yours in abundance!

Even the conventional greeting tells its readers a lot. They are being addressed by an “emissary” of Messiah Jesus. Those who knew the story of Jesus knew that emissaries were limited in number, because they had been commissioned by Jesus himself to tell that story. A letter from one such was of great authority, even if everyone knew that the emissary himself was dead, the readers believed they were being addressed by him through the author.

Scholars have gone to town on the Greek term “parepidaymoi” (sojourners) pointing out that it may go back to the way Abraham lived in the promised land, as an alien rather than a citizen, but it seems more likely that in this instance it is matter of fact, referring to the Jews who over centuries had settled in these areas, especially after the destruction of the Jerusalem Temple,in 70CE. The author is assuming that all or almost all of the followers of Jesus in these places were Jews. If we took the first interpretation we would translate,” those living as aliens in” meaning believers living amidst non-believers.

Again, scholars who favour a certain doctrine of predestination have made much of “picked out by the foreknowledge of God” to support that doctrine. I see this language as emphasising the wisdom and preparedness of God who selects people to form his assemblies and to do his work in the world. They are picked by a very simple means, namely, by responding to the gospel message. The focus is on the life of the people picked to witness to God’s goodness in the world; they are needed. God’s forethought is said to work “en hagiasmo pneumatos” usually translated as “by the sanctifying Spirit”. But there is no definite article in the Greek, which leads me to guess that it means “by a sanctifying of spirit” that is, of their spirit.

Their life is characterised a) by obedience to Jesus (that would be an accurate test of faith!) and b) by being sprinkled with his blood. This phrase seems linked to the kind of thinking seen in Hebrews chapter 9, where the author mentions how once the people had promised obedience to the covenant, Moses sprinkled them with the blood of the sacrifice. Jesus, he says, has once and for all shed his blood so that his people may enter heaven. To be sprinkled with the blood of Jesus is to be purified by his act of love on the cross. Here in this passage,the phrase is not explained, but like all the phrases in this sentence which characterise the assembly of Jesus, it may belong to a baptismal liturgy used at the time.

Well, that’s just one sentence, in which the complexities of translation are evident. Quite apart from the Greek language, we are dealing with overlapping phrases, some of which connect with phrases from the Jewish Bible, which together make up a kind of code in which a letter like this is written. Any actual translation is a reduction of the multiple meanings suggested by the text.