For Messiah also suffered for sins once for all, a just man for unjust people, so that he might bring us to God. He was put to death in flesh and blood but made alive in spirit, in which he went to preach to the spirits in prison, those who were disobedient in the days of Noah when long-suffering God kept waiting for them – this was during the building of the ark, in which a few, in fact eight persons, were rescued through water.

It is the baptism prefigured by this water that now rescues you, not as a removal of filth from the the flesh, but as the pledge to God of a clean disposition, through the resurrection of Jesus Messiah, who has entered heaven and is at God’s right hand, with angels, rulers and powers subjected to him. 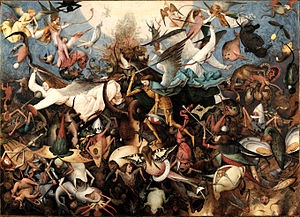 Most translations say that Messiah “died for sins” following the Greek text which has the verb “apethanen,” from the verb to die; whereas I am following other manuscripts which have “apathen” meaning suffered. The mistake would be easy for a scribe to make, because “died for our sins” was already a common phrase; but when the previous sentence has mentioned suffering it seems more meaningful for the author to continue, “Messiah also suffered.”

The author says he suffered once for all, which emphasises a) that he is no longer suffering because raised to life, and b) that this suffering is an historic event showing the extent of his love and the love of God in him, which suffers for our sins. This love “brings us” to God. Messiah supremely is a just man suffering for the unjust people who crucified him, rejected him, deserted him. Believers have been unjust, but also have suffered at the hands of unjust people.

The phrases “in flesh and blood” and “in spirit” name the two fundamental modes of human existence, that is, mortal humanity on the one hand, and humanity-in-God on the other. In the second of these modes, Jesus Messiah is said to have preached to the spirits in prison who are defined as disobedient to God at the time of Noah. These spirits could be the supernatural beings who increased human evil, according to Genesis. If so, this is not an act of Messianic mercy, but rather the announcement of his victory over these beings. Other interpretations are possible, for example the medieval tradition of the “harrowing of hell” which depicts Jesus breaching the gates of hell to set free the souls imprisoned there before the time of Jesus.

The rescue of Noah and family through water provides a symbol for the author of messianic baptism which rescues believers from the powers of the world. The person who is united with Jesus through faith shares his death, leaving sin behind, and his resurrection, pledging himself to the new life which is offered. The language perhaps comes from the baptismal ceremony of the Assemblies of Jesus. The phrase which I have translated as “the pledge to God of a clean disposition” takes the Greek “eperotema” not as “appeal” as many translations, but as the “pledge” which facilitates a contract. The Greek “suneidesis” usually translated as “conscience”, in this case has the sense of something willed: a frame of mind, a disposition. The believer is emboldened by the resurrection of Jesus to commit his/herself to a new mindset. This is made possible by the victory of Messiah over the powers that have ruled the world.

This passage shows how the understanding of God’s rescue of humanity through Jesus Messiah uses the language and motifs of the Hebrew Bible. Once their meanings have been worked out, we are left with the life-changing message of a community which is not dismayed by its numerical insignificance in a great empire.