This is the final blog on the First Letter of Peter, in which I sum up my experience of translating and studying it.

1. The author uses good “common” Greek, the international language of the Roman Empire, and in particular of its commerce and community life. He need not have been classically educated, indeed he may not even have been able to write, given that he dictated his message to a scribe. My guess is that he was a regular speaker in Greek, almost certainly as a leader of the Assembly of Jesus in Rome, where his measured, pious eloquence would have been appreciated. He is not an original thinker, nor does he express his convictions in sparkling prose. Rather, he says things well, in a sober, modest and effective way. It’s not surprising that he advocated sobriety and modesty as important virtues. I don’t think he was the disciple Peter writing before 64 CE; more likely an Assembly leader in Rome, writing 90-100CE. His description of Rome as “Babylon” seems to me more typical of the later date. He doesn’t present himself as thinking new thoughts, but as communicating the convictions of the community.

2. The various Assemblies of Jesus, who are addressed in this letter, lived in ancient cities in Asia Minor which is fully part of the Roman Empire. Diaspora Jews were probably the core of these assemblies but Gentiles also had joined them. These are multi- ethnic communities and therefore already a sign of barriers broken down. Their common belonging and life-style may have made them seem strange or even alien in their cities.

3.The occasion for writing the letter seems to have been the threat or experience of persecution. Unless the author is concealing his real estimate of the authorities, it would appear from his command to respect them, that the persecution did not come from the state. We know however that originally Messianic Jews were seen as just another sort of Jew, whose religion was “allowed” by the state. But once there was a clear difference between Orthodox Jews and unorthodox followers of Jesus Messiah, it may have been apparent that this new faith was not “allowed.” If so there may have been prejudice from other citizens, complaints from Jews, and locally, questions asked by imperial officials. In a culture where success and sometimes even survival depended on reputation, the consequences of popular prejudice were severe. 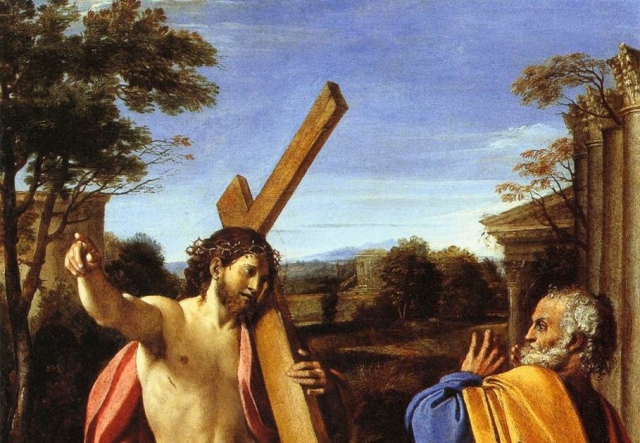 ST PETER, RUNNING FROM PERSECUTION IN ROME MEETS JESUS AND ASKS HIM, QUO VADIS, WHERE ARE YOU GOING? JESUS SAYS, TO ROME, TOMBE CRUCIFIED AGAIN.

4. The author encourages the assemblies under stress, to focus on God, on the example of Jesus, and on their own virtues, rather than on their enemies and their problems. The virtues of humility, sobriety, endurance and communal love, along with the example of Jesus’ suffering, are said by the author to be antidotes to persecution. I find it astonishing and moving that communities which were subject to damaging prejudice should be trusted to respond so magnificently. Obviously their discipleship of a crucified and risen Messiah was at the root of their capacity to face injustice without rage or hate. They practised the justice of Jesus within their assemblies, but faced injustice from the outside with patient courage, which they hoped might be transformative in time.

5. Ultimately the advocacy of patient endurance to slaves and women, however distasteful to contemporary convictions, should be seen in the same light as the endurance of persecution: both are intended to build up the shared life of the assemblies, while offering the joyful news to those who treated them unjustly. This is tough love indeed, and although the addressees might have hoped for more worldly comfort, the author concludes, “This is the real kindness; stand in it.”

6. Spending time with scripture is rarely without benefit.