Continuing my translation of book 3 of the psalms, with comment

To the choirmaster, on the Gittith. A Psalm of the Korahites.

How desirable are your dwellings, Yahweh of armies!

My soul hungers, yes, it pines, for Yahweh’s courts.

My heart and my flesh cry out to the living God.

The sparrow finds a house and the swallow a nest

Where she can settle her young, beside your altars,

Yahweh of armies, my king and my God.

How lucky are those who live in your house:

They are always singing your praise

How fortunate those who find their strength in you:

The highway to Zion is in their hearts.

When they walk through Baca’s sad valley, they make it a spring;

And the early rains bestow their blessing.

They ascend from summit to summit;

God will be seen by them in Zion.

God of Jacob, hear and help.

God see our human shield; look on the face of your Anointed

Better one day in your courts than a thousand anywhere else!

Than dwell in the homes of evildoers.

For Yahweh is a sun and a shield,

The giver of grace and glory;

Nothing good does he deny

To those who walk in innocence.

Yahweh of armies, how fortunate they are

Who find security in you. 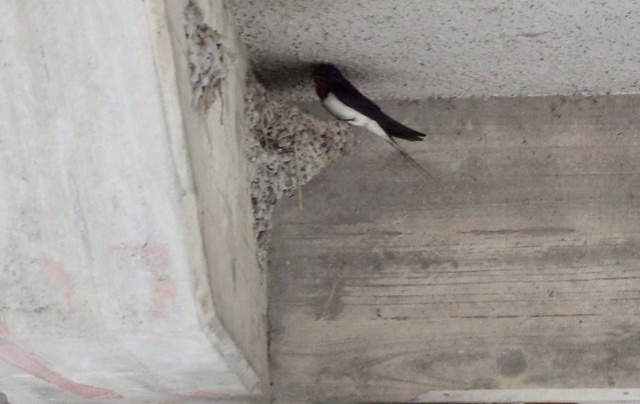 I have to declare a special fondness for this psalm, which is due in no small measure to the anonymous 17th century metrical translation published in Scottish Psalms, and the tune used since my childhood days, Harrington. Given that the translator was under instruction both to be literal and to rhyme, his version is astonishing. (For a long time in Scotland we have only sung verses 1-5.)

Of course the psalmist was writing about the Temple, although it’s not clear if the psalm was composed in the time of the first or the second temple. In any case he asserts its loveliness, or rather the fact that it is loved, or desirable. He is not praising its architecture and decoration so much as its capacity to arouse the love of the worshipper. This is a visceral love involving heart and flesh, a passionate love, which has maybe become uncommon today, as it is neither a charismatic ecstasy nor a righteous contentment, but a sober adoration of God.

The images of the sparrow and the swallow point to the weakness and wisdom of those who “take refuge in God”, who welcomes and protects. They also suggest the living community of those who trust in God, which includes all creatures. That community dwells in “God’s house” which is not only a place but also a dynasty, a kingdom of creatures who find their strength in God, rather than in power or wealth.

The psalmist says that the highway is in their hearts. I think he means the pilgrim highway to Zion, and have so translated. Their journey to Zion is therefore both literal and spiritual; their eagerness fills the sad valley with springs of water, and the early rains show their approval by joining in. I have translated the difficult Hebrew word “chail” as summit because I think the psalmist imagines them ascending to Mount Zion, where God will appear to them. This journey has to be made repeatedly, as was the case in the pilgrim festivals of Jewish faith, because again and again flesh and blood must be lifted towards its maker.

The psalm includes a prayer for the “anointed one” who is doubtless a king, whether as early as the Davidic dynasty or as late as the Maccabean. The word “shield” is used of both God and the king.

When the psalm returns to the temple, we are given the simple and beautiful comparisons between a day in the temple and a day elsewhere, and between the doorstep of the temple and the homes of evildoers. The King James’ translation of this latter comparison as “doorkeeper” is a lovely idea but not quite justified by the text. We should note that the psalmist’s love for God includes not only the grace and glory given by God but the expectation that God’s lovers will walk in innocence, keeping the commandments.

For those, both Jews and non-Jews, who lack any physical temple, the house of God may be seen as the faith community, the world and its creatures, or the individual soul.