This continues my translation with comment of The Letter to Colossians

Tychicus, my dear brother, faithful helper and co-slave of the Master, will let you know all my news. I have sent him to you for that very reason, to let you know about us, and to strengthen your hearts – and Onesimos is with him, a faithful, dear brother, who is one of your own – they will tell you what has been happening here. Aristarchos, my fellow jailbird, sends his greetings, as does Mark, Barnabas’s cousin – you’ve had instructions about him; if he comes, welcome him – and Jesus nicknamed Justus. These are the only snipped men amongst my co-workers for God’s Rule, and they have been a great support to me. Epaphras, also one of your own, a slave of Messiah Jesus, sends greetings; he always strives hard for you in his prayers, that you should stand complete and fully convinced of the whole of God’s will. I am his witness that he has a fierce concern, not only for you, but for the people in Laodicea and Hierapolis. Lukas the well-loved healer, and Demas, send you greetings. Pass on my greetings to the brothers and sisters in Laodicea, and to Nympha  and the Assembly in her house. And when this letter has been read out amongst you, send it on to be read in the Laodicean Assembly, and as for you, read out the one from Laodicea.

And say to Archippus, “Be sure you carry out the duties of service which you received from the Master.”

This greeting is in my own hand – PAUL. Remember my chains. Messiah’s kindness be with you. 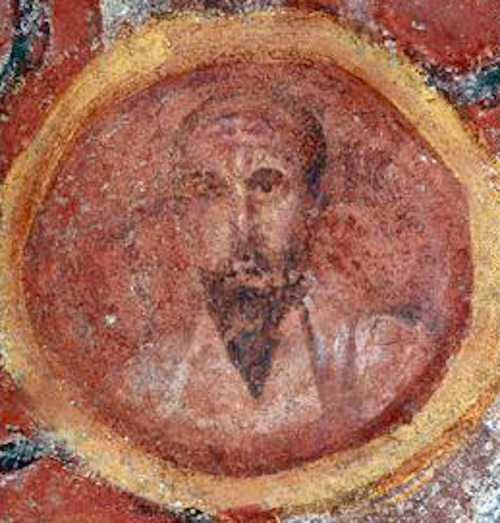 Obviously this is the most difficult section of the letter to interpret as not being from Paul himself. I guess that this type of writing had its rules, which may have included the invention of suitable greetings in the name of the supposed author. There are some similarities between those greeted here and those in the letter to Philemon, which is held to be a genuine letter of Paul. This author may have borrowed them. But does that mean this whole section is merely an invention, to round off the Disciple’s message in Paul’s name?

I think not. Some of what is here has  nothing to do with Paul (as far as we know) and may therefore be genuine greetings from the Disciple to people he knew. The message for Archippus for example, may be for a real Archippus in Colossae, who has been a little slow in carrying out his appointed service. If there is here a mixture of invented and genuine messages, its purpose may be to associate current greetings with pseudo- Pauline greetings to give the former more power: the present Assembly is blessed by the presence of its martyred leader.

The author of the letter continues the work of Paul by guiding the Assembly in the tradition of the Pauline Assemblies, seeing them as communities of the Rule of God, living under the Rule of Rome, enabled by God’s spirit to carry the story of Jesus Messiah to their fellow citizens, as the vanguard of a new humanity in him. Those last two words are important: the new life, the new person, the new Assembly are all “in Messiah Jesus” who is both a historical person and the encompassing love of the creator God.

As regards the historical person, this author gives very little information apart from his death on the execution stake. The hymn which he composes or quotes has much to say about Jesus’ identity with the creative love of God, but nothing specific about how this was seen in his earthly life. The author nevertheless insists that “the abundance of the Godhead” dwelt in him “bodily” meaning his earthly as well as his resurrection body. Moreover, the assembly members are urged to model their living upon him, which may be evidence that the Pauline Assemblies had a treasury of traditions about Jesus’ life perhaps similar to those of Mark’s gospel. As is evident, I have translated the Greek “Christos” as Messiah rather than as Christ, because that is its meaning and although in due time it became little more than Jesus’ second name, its Jewish origin is a reminder of Jesus’ humanity; a messiah is human or nothing.

“Being in Messiah Jesus” is both personal and communal: individual trust in the joyful news and individual commitment to dying to worldly living and rising to heavenly living are required. But the individual is not isolated in these requirements because they are part of an assembly, a gathering of believers, which sees itself as a body of which the Messiah is head. Each member has a personal destiny, a maturity into which they may grow, but they do so within the body and certainly not by being sidelined into some spurious alternative of self-development.

The local Assembly in turn belongs to the world-wide Assembly whose existence is represented in this letter by the references to Laodicea and to believers who are with Paul. There is no evidence of any formal structure uniting assemblies other than their mutual affection and their common membership of the body of Messiah.

Careless people have talked about this author’s doctrine of a “cosmic Christ”. That’s a mistake. For this author the cosmos is in thrall to spiritual forces, which in league with their human adherents, limit the goodness and increase the evil in the cosmos. Only those who give in to them are ruled by them. Jesus Messiah, by his great refusal of them, especially on the execution stake has defeated them, and in his resurrection, triumphed over them, revealing them as paper tigers; and enables his people to do so. In this he is revealed not as one with the cosmos but as one with God the creator, and active as the wisdom in which the cosmos was created. He is present in the struggle of the weakest believer with the powers of evil and in the love which moves the sun and the other stars.