Although this letter claims to be by Paul, most scholars agree that it was written in his name some years after his death, perhaps 75-95CE, because it contains words and concepts not found in his authentic writings, and is in a style which is not his. I agree with this assessment, but I view the letter as a legitimate development of Paul’s teaching on the nature and role of the church in the world. The focus of the letter is communal and in an important sense, political.

Pseudonymous authorship was common enough in the ancient world, being a device by which the past could provide a critique of the present. In this case the authority of Paul is invoked to emphasise the ecumenical presence of the church throughout the Roman Empire, as an agent of God’s battle against its ruling powers.

The style of the letter with its piled up participial and genitive phrases is a challenge for the translator, because it has no obvious parallels in English style. It would be, nevertheless, a misrepresentation of it to reduce it to orderly sentences, as for example, the GNB has done. As always, I am happy to share my attempts with my readers, asking them to make any comments or corrections at the foot of the blogs. 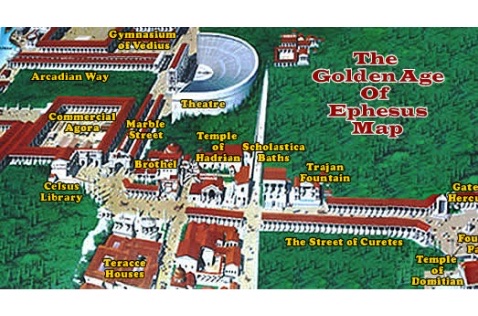 Paulos, by God’s decision an emissary of Messiah Jesus, to those who are holy and faithful in him: kindness and peace to you from God our father and the Master, Jesus Messiah.

Praise to the God and father of our Master Jesus Messiah, who has blessed us in Messiah with every spiritual benefit in the heavenly realm, just as he picked us out in him before the world’s foundation, to be holy and unblemished in his presence; and destined us in love to be his adopted children, through Jesus Messiah, in accordance with his pleasurable purpose, so that his splendid kindness, freely given to us in the Beloved, may be praised.

In him,we are bought back from slavery at the cost of his blood, released from our misdeeds through his rich kindness, which he has lavished upon us. In complete wisdom and understanding God made known to us his secret decision, in pursuit of the plan which he published in Messiah for the oversight of time’s fulfilment, to sum up all things in Messiah – everything in the heavens and upon the earth!

In him, as destined by the intention of the One who works all things by his design and decision, we who placed our hope in Messiah before he came, received our inheritance: to live in praise of his splendour.

In him, you too, when you heard the message of truth, the joyful news of your rescue, and put your trust in it, were stamped with the seal of the promised Holy Spirit, which is the down – payment on our inheritance until the full liberation of God’s own people, to the praise of his splendour.

The above is my best guess at what the passage means; but due to the ambiguities of its syntax, I cannot be as sure as I would like.

In the third verse where the author uses words derived from the verb to bless three times with slightly different meanings, I have used different English words, praise, blessed and benefit, to avoid the repetition which I think is clumsiness rather than emphasis. But the verse does emphasise one of the letter’s main themes, that faith and shared life in the church are no accidental development of Jesus’ work, but part of God’s eternal plan for creation. This theology occurs in the genuine letters of Paul, but is taken further by this author. This is “God’s secret decision published in Messiah” which is a vivid expression of the relationship between God’s timeless wisdom and the life/death/resurrection of Jesus. The author clearly states that this involves predestination: God’s designed rescue of human lives is always in advance of us, always there before us. The author does not think that this operates as mechanical causation in earthly lives; our freewill is not cancelled, but adopted, as part of our adoption as children of God. The positivity of this divine planning is marked by phrases such as “pleasurable purpose” and “splendid kindness.”

Jesus is called, as in the gospel story of his baptism, the Beloved (son). This is in line with the author’s theology of God’s love, which comes to human beings through the beloved son Jesus, rather than as some kind of cosmic benevolence. God’s love is historical in the faith of Israel and the event of Jesus Messiah.

The event of Jesus brings God’s love to the believer as “apolutrosis” that is, as the buying back of alienated property, in particular the buying back of a slave’s freedom, by himself or another person. Jesus makes this payment to the evil powers that enslave us, at the cost of his death. I emphasise in my translation that our misdeeds are not merely forgiven but we are also freed from their power over us.

God’s plan for “time’s fulfilment” is described by the Greek word, “anacephalaiosis” which was normally used to refer to condensing a speech into a summary. God “sums up” all things in his Messiah, that is, all the matter and events of the universe, good and bad. That is why the whole life of believers is “in Messiah,” or “in him”. The reality of God in Jesus includes the reality of the universe.

The “we” who placed hope in Messiah before he came are of course the people of Israel, whose “inheritance” was to be God’s people, now joined by those who have heard the joyful news of Jesus and have put their trust in it. They have been “stamped with the seal of the Holy Spirit” as the mark of God’s possession, which is marvellously seen as a down- payment on their full liberation, which awaits them in God’s future.

It becomes clear that the author’s strange language, his repetitions and piled up clauses, is a refusal to allow his readers to think of their lives in worldly terms, or of their faith as simply the choice of a God; so that they can see themselves as part of God’s plan for the whole creation.